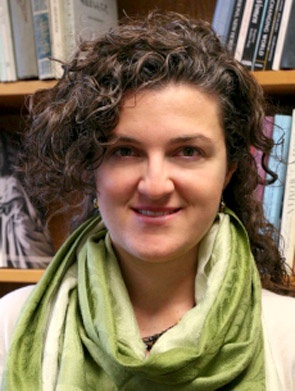 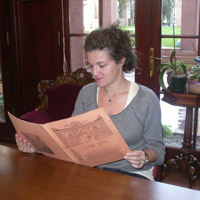 "I joined MIT in 2011 after a post-doc year at the University of Michigan’s Armenian Studies Program. I teach courses related to the modern Middle East, with a focus on ethnic diversity and majority-minority relations. I am also affiliated with MIT's Women's and Gender Studies Program, where I teach courses on gender in the Middle East and North Africa. As the holder of the McMillan-Stewart Chair I organize lectures that pertain to women in the developing world."

“Reclaiming People, Reclaiming Land: Politics of Inclusion after the Armenian Genocide,” by Professor Ekmekcioglu, is forthcoming in the July 2013 volume of Comparative Studies in Society and History.

“There was no Armenian women’s history in Armenian or Turkish. So, I decided to write it myself!”


Lerna Ekmekcioglu was born on the dividing line between two cultures, Turkish and Armenian. A native speaker of both languages, she brings a unique perspective to her area of research — examining how ethnic Armenians in Turkey managed to live side by side with those responsible for the Armenian genocide.

“What do people do when they are excluded?” Ekmekcioglu asks. “How do the state and minority groups negotiate their roles?”

Ekmekcioglu has found that the pressures of the Turkish (and Ottoman) state created a divide between public and private identity, and that women played a significant role in defining the private realm. “Inside the family, the household became the place where [Armenians] could keep their mother tongue [and other traditions]. Mothers, the heart of the home, were positioned to preserve what the regime wanted to stamp out,” she says.

“Moreover, there were those semi-private spheres, such as Armenian schools and churches, where even though the presence of the state was felt, Armenians were able to gather together and found ways of maintaining their differences from the majority.”

A faculty member in MIT History and in the Women’s and Gender Studies program, Ekmekcioglu says she has been interested in feminism since college. That was when she first researched the Turkish women’s movement and discovered that the only information available centered on the experience of Muslims, the majority population in Turkey. Non-Turks, including ethnic Armenians, Greeks, and Jews, were simply absent.

“There was no Armenian women’s history in Armenian or Turkish,” Ekmekcioglu says. “So, I decided to write it myself.”

Together with college friends, she began by writing an academic article on Hayganoush Mark, a woman from Istanbul who published an Armenian women’s journal from 1919 to 1932. Clearly critical of existing scholarship, the article nevertheless won third prize in a Turkish student history competition. Ekmekcioglu was thrilled.

“That’s when my life changed,” Ekmekcioglu says. “This is when I understood that Armenian feminism was a worthwhile topic for research and writing”; she then decided to pursue an academic career.

After completing her bachelor’s degree at Boğaziçi University in Turkey, Ekmekcioglu went on to earn a master’s degree and then a Ph.D. from New York University. In 2006, she co-edited a book in Turkish about Ottoman/Turkish Armenian feminists, Bir Adalet Feryadı, Osmanlı’dan Cumhuriyet’e Beş Ermeni Feminist Yazar (1862-1933), [A Cry for Justice: Five Armenian Feminist Writers from the Ottoman Empire to the Turkish Republic (1862-1933)], which was so well received it has gone through multiple editions.

"These women argued, on a daily basis, that tradition and equality could co-exist.”

In 2011, Ekmekcioglu joined MIT’s School of Humanities, Arts and Social Sciences, where she now serves as the McMillan-Stewart Career Development Assistant Professor of History. She’s currently writing another book, Surviving the New Turkey: Armenians in Post-Ottoman Istanbul, which covers two very different yet consecutive periods in Turkish and Armenian history: 1918-22, when Istanbul was under Allied occupation, and 1923-33, the first decade after Turkey became an independent republic.

“This is the first academic attempt to study these time periods together and from the perspective of the Armenians who experienced it,” she says.

The 1915 genocide eviscerated the male population of Turkish Armenians, leaving huge numbers of women and children without protectors in a strictly patriarchal society. The policy the Ottomans took toward them was to have them adopted into Muslim households.

“According to this patriarchal ideology — both groups [Turks and Armenians] are patrilineal — you belong to your father and his religion,” Ekmekcioglu says. “This mentality assumed that women and young children don’t matter to the identity of the group. Therefore, children born to Armenian women ‘adopted’ into Muslim families would be Muslim.”

However, when the Ottoman Empire lost World War I, the armistice agreement dictated that these adopted women and children be returned to Armenian control. The surviving Armenian leadership organized rescues and founded shelters, even agreeing to consider any children born to the adopted women as Armenian — a startling break with tradition that stemmed from the desperate need to rebuild the Armenian population, Ekmekcioglu says.

“I’m looking at women who didn’t want to return, because they thought they would be considered ‘spoiled’ if they returned, or didn’t want to move to an institution,” Ekmekcioglu says. “Of those who returned to the Armenian community, many were married off to Armenian men. Many were pregnant when they returned, sometimes from rape, and they tried to kill their babies or neglected them. But the Armenian authorities did not always allow them to have abortions because they needed the population.”

Worse still, during the Turkish struggle for independence from the occupying forces, many Armenian women and orphans were threatened again, and some were even massacred. Yet, a small percentage of the Armenian community stayed inside Turkish borders even after the establishment of the Republic of Turkey, crafting communal survival strategies to remain a distinct group.

“What did they do to survive the new Turkey?” Ekmekcioglu asks.

She plans to answer this question in full while on leave in spring 2013, when she finishes writing her book. But it’s clear that women played a central role in preserving Armenian identity.

“This is not merely a story of a persecuted people resisting oppression,” Ekmekcioglu says. “It is also the story of Armenian feminists, who were glorified when they promoted tradition (such as the importance of speaking Armenian) and vilified when they demanded a say in the decision-making bodies of the community....These feminists argued, and on a daily basis, that tradition and equality could co-exist.”