It is among the most significant questions in economics: Why do some nations become wealthy and powerful, while others remain mired in poverty? And why do some of those powers, from ancient Rome to the modern Soviet Union, expand and then collapse?

From Adam Smith and Max Weber to the current day, scores of writers have grappled with these questions. Some scholars, like Weber, have argued that religious or cultural differences create vastly different economic outcomes among countries. Others have asserted that a lack of natural resources or technical expertise has prevented poor countries from creating self-sustaining economic growth.

Economists Daron Acemoglu of MIT and James Robinson of Harvard University have another answer: Politics makes the difference. Countries that have what they call "inclusive" political governments—those extending political and property rights as broadly as possible, while enforcing laws and providing some public infrastructure—experience the greatest growth over the long run. By contrast, Acemoglu and Robinson assert, countries with "extractive" political systems — in which power is wielded by a small elite—either fail to grow broadly or wither away after short bursts of economic expansion. 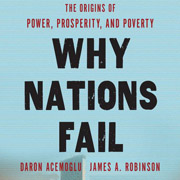