Susan Silbey, the Leon and Anne Goldberg Professor of Humanities, and Professor of Sociology and Anthropology, has received the 2009 Harry J. Kalven Jr. Prize from the Law and Society Association. The award is given in recognition of a body of scholarly work, and goes to individuals who have demonstrated empirical scholarship that has contributed most effectively to the advancement of research in law and society.

The Law and Society Association

Citation from Law and Society Association
"Susan Silbey has a long and distinguished record of organizational and scholarly contributions to the sociology of law, and to this association. Her first publication, in 1981, remains foundational to understanding the work of lower-level courts, still a much-neglected topic. Many early writings were concerned with civil disputes and their resolution, where she made important contributions to the critical understanding of mediation both as a process and as a social phenomenon.

This led into her celebrated collaboration with Patricia Ewick on studies of legal consciousness, a series of contributions examining law in the everyday life and thinking of ordinary people.  Alongside this, she has produced a stream of theoretical and methodological papers that have cemented her reputation well beyond the usual boundaries of law and society, and insisted of its relevance to many scholars who would not normally recognize the presence of law in their research domain.

However, the criteria for this award stipulate that it is not purely for lifetime achievement but must also recognize current activity.  In this respect, we also commend Susan’s continuing work on the “Green Laboratory” project.  At one level, this is a classic study of the impact of regulation. At another, it tells a story about the encounter between law and the university that has profound implications for us all.

Will regulatory law restructure university science – with inevitable consequences for many of us here as other departments are forced to adopt similar models? Or will university science restructure regulatory law, creating a competitor to the bureaucratic models that have dominated for a generation and more? This is the kind of ambitious question that Susan has addressed throughout her career, an ambition that the Kalven prize justly acknowledges. 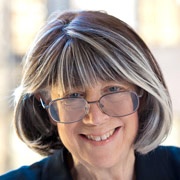