An anthropologist's lasting legacy at MIT 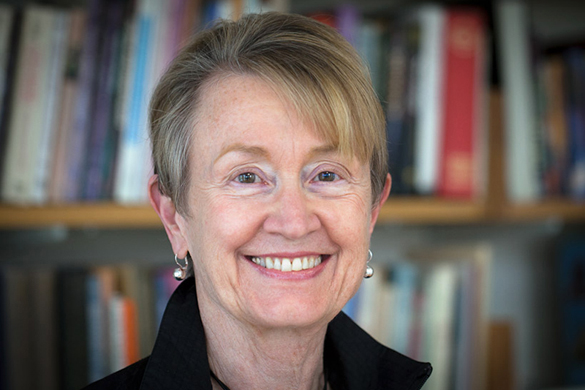 “Jean thinks ethically and acts ethically at every scale,
from the global geopolitical to the very interpersonal
politics of the department. She communicates through
action that we’re all in it together.”

In the summer of 1965, just after graduating from Wellesley, Jean Jackson traveled for the first time to rural Mexico for fieldwork training. She had majored in anthropology/sociology in college, and had also studied Spanish. In the fall, she would start graduate studies in anthropology at Stanford University.

Because Jackson's Spanish was very good, the fieldwork training program embedded her in the toughest spot on their list — a community under threat of losing its land and suspicious of all outsiders, including the young American woman. Things did not go well. Rumors spread — that Jackson was an atheist, a communist, that she had come to steal their babies.

“It was difficult,” Jackson recalls of this daunting beginning to her distinguished life in anthropology. But she soon had other, far better field experiences, and knew she had found her calling. “I liked being in another country," Jackson says, "I liked speaking Spanish. I liked the challenge of getting information from people and interacting with individuals who were very different from me — the kinds of things anthropologists do.”

In June 2014, Jackson retired, after 42 years of dedicated service to MIT.  In the great anthropological tradition, Jackson’s lifetime of research has shown the effectiveness of “making the strange familiar, and the familiar strange.” And, as her colleagues reflect on her legacy, they describe an integrity that shines through all she does — in her leadership as a colleague and department head, as a scholar, and as a beloved teacher to several generations of MIT students.

Jackson joined the MIT faculty in 1972, one of the earliest members of a newly formed Anthropology program. Now, upon her 2014 retirement, the program's nine members are a strong and tight-knit community — much to Jackson’s credit, according to her colleagues.

“She thinks ethically and acts ethically at every scale, from the global geopolitical to the very interpersonal politics of the department,” says Stefan Helmreich, Elting E. Morison Professor of Anthropology and current program Head. “She communicates through action that we’re all in it together.”

Over the years, Jackson has been a mentor for her younger colleagues. She helped many of them navigate MIT’s rigorous tenure process. One point of pride for the program, she says, is that “everyone we have hired has received tenure.” She attributes this success to teamwork that puts MIT Anthropology ahead of individual needs. “She is a role model for running an open and egalitarian, participatory program,” says Susan Silbey, Leon and Anne Goldberg Professor of Humanities and former program Head. “That is what we are.”

Jackson has also been committed to generating collegiality within MIT Anthropology. “Jean has been an incredible force,” says Christine Walley, associate professor of anthropology. “She’s also quite an amazing gourmet. I have wonderful memories of hanging out at her house and eating wonderful meals she prepared, drinking wine, and having great conversations about anthropology with my colleagues.” 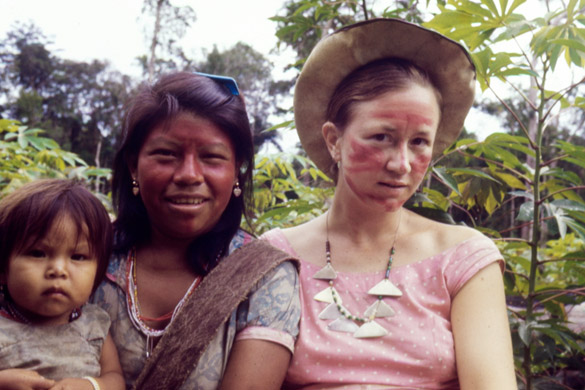 Jackson in a manioc field with a Tukanoan woman and her child; the face paint is sun protection

Between 1968 and 1970, Jackson lived in
and studied isolated communities in the remote
Amazonian tropical forests in an area of southeast
Colombia called the Vaupés — a region where,
even today, all travel is by canoe or aircraft.

Explorer in the field

At Stanford, Jackson chose to focus her studies on isolated communities in the remote Amazonian tropical forests in southeast Colombia, an area called the Vaupés, on the border with Brazil. Even today, the region has no roads. “All travel is by canoe or aircraft,” says Jackson, who lived there between 1968 and 1970 in a multi-family longhouse, the only building in the settlement.

She had originally intended to study the way this isolated group, unexposed to Western medicine, viewed health, disease, and the body. But upon arrival, she found that the community was intensely multilingual. Nearly two-dozen languages are spoken across the region, which is about the size of New England. Taking stock of the situation, she decided instead to study the multilingual social structure itself.

A characteristic of Tukanoan culture is linguistic exogamy, where women marry outside of their own patrilineal descent group, each of which is identified with a distinct language. Jackson learned about rules governing language choice in various kinds of interactions. For instance, the language choice differs depending on the identity of the participants in a conversation.

“Among Tukanoans, language is an emblem of your patrilineal descent,” says Jackson, who published a seminal paper on the topic in 1973 that remains a go-to reading assignment in many linguistic anthropology classes today. “It’s fascinating, and I’ve been studying it ever since.” A book, The Fish People: Linguistic Exogamy and Tukanoan Identity in Northwest Amazonia (1983), resulted from that research.

Recently, Jackson gave her 700+ slides from this Northwest Amazon fieldwork to MIT's Rotch Library Visual Collections; the images have been digitzed, edited, and captioned, and are now available to researchers.

After coming to MIT, Jackson continued to travel to Colombia, and over the years started to notice changes in the region. In the mid-1970s, grassroots groups were mobilizing around indigenous rights, a trend emerging throughout the Americas. She discovered that the organizing taking place in the Vaupés had been spearheaded by clergy in the local Catholic mission, part of their campaign to push out competing Protestant missionaries.

These initial efforts motivated what turned out to be a decades-long study of the Colombian indigenous rights movement — research that led to a co-edited book, Indigenous Movements, Self-Representation and the State in Latin America (2002). This new topic required changes in her fieldwork methodology. Her earlier work was based on what is known as participant observation —  “deep hanging out,” Jackson says. Such long-term, intense face-to-face interaction is the classic anthropological methodology. However, to study and understand the indigenous rights movement, she also had to interview influential outsiders, such as missionaries, officials in government agencies, and transnational non-government organization personnel.

Such changes “are what’s happening in anthropology in general,” Jackson notes. “It is difficult to go in and study a community in isolation now, because every community has multiple ties to the outside.”

A chronicle of change

Jackson is now at work on a book that captures her field experiences over the past two decades: Managed Multiculturalism: An Anthropologist Examines the Indigenous Movement in Neoliberal Colombia, 1990-2012. The book chronicles the ways that Colombia has changed through indigenous political activism, and also examines how social movement theory developed.

“She spent forty-six years maintaining those connections and networks in Colombia, with long-term commitment and loyalty that are becoming increasingly rare among scholars,” says Walley. “That she can see these changes over time, it’s pretty astounding.” 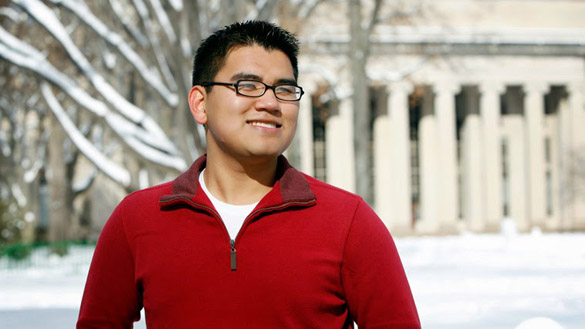 “Anthropology taught me to see the big picture.
When I meet someone now, I think about the social
factors that might be driving what I’m seeing...
And every time I went to Professor Jackson's office,
I learned something new and enriching. She wasn’t afraid
to tell me, ‘step up your game.’ I really liked her for that.”

Though she spent most of her career focused on Colombia, Jackson never forgot her early interest in medical anthropology. For several years in the 1980s, after a bout with chronic back pain, she studied patients in a chronic pain clinic in a rehabilitation hospital, a project that was anything but depressing, despite the topic.

“People were telling me incredible stories. They wanted to talk. I was just there, listening,” says Jackson. “I’d come home at night high as a kite.” Her book Camp Pain: Talking with Chronic Pain Patients (2000), resulted from that research.

Among her MIT courses, she taught "Disease and Health: Culture, Society, and Ethics" — classes in which Jackson realized she had a significant opportunity to help MIT students learn about the ambiguity and complexity that inform and characterize all human lives and cultures. “MIT students carry out analyses all the time in their lab courses," she says, "and they also benefit from gaining the skills and forms of analysis that apply to human beings and societies."

Suan Tuang, ’14, is a good example of such a student. Tuang took his first anthropology course as a balance for his chemistry classes, and became so fascinated that he took three classes with Jackson, declared a minor in anthropology, and was inspired — in part by his medical anthropology course — to go on to Harvard Medical School.

“Anthropology taught me to see the big picture,” Tuang says. “When I meet someone, I think about the social factors that might be driving what I’m seeing. Different factors can be at play. This is very applicable right now to me.”

Not only did Jackson's teaching help broaden Tuang’s thinking, he says, she also helped him improve his writing and communications skills, especially challenging for non-native English speakers “Every time I went to her office, I learned something new and enriching,” Tuang remembers. “She wasn’t afraid to tell me, ‘step up your game.’ I really liked her for that.”

As a scholar, teacher, mentor, and colleague extraordinaire, Jackson, has created an enduring legacy at MIT. Happily, she will be found in her campus office frequently as she prepares her forthcoming book, and continues to be an active scholar, writer, and member of the MIT community.

In progress
Managed Multiculturalism: An Anthropologist Examines the Indigenous Movement in Neoliberal Colombia, 1990-2012.

2002
Indigenous Movements, Self Representation and the State in Latin America, Kay B. Warren and Jean E. Jackson, eds. (Austin, University of Texas Press)