Tom Hughes: Remembering a Non-Lifer
A Tribute by Rosalind Williams 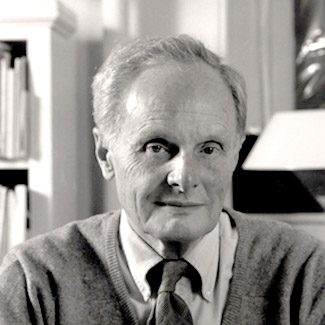 "Like William Barton Rogers himself, Tom Hughes came to MIT from Virginia with a vision of what technology and engineering mean in the broad context of human experience."

— Rosalind Williams, Bern Dibner Professor of the History of Science and Technology

MIT is justifiably proud of its “lifers”: individuals who enter MIT as freshmen, continue here for graduate school, join the faculty, and live out their entire professional lives under the Great Dome. In some cases — Paul Gray and Sheila Widnall come to mind — the character of the individual becomes so intertwined with the character of the Institute that it becomes hard to know where one stops and the other begins.

Thomas Parke Hughes (1923-2014) was a non-lifer. He came to MIT in the 1960s for a short stint as an assistant professor. He soon moved on to other institutions, where over time he developed into the nation’s pre-eminent historian of technology. When he returned to MIT as a distinguished visiting professor in the 1990s and early 2000s, he brought with him a deep understanding of how the history of technology transforms our understanding of general history as well as of the role and responsibilities of engineering. Would he have developed such perspectives if he had spent his whole career at MIT? This is an unanswerable question, but without question Tom Hughes reminds us of the invigorating role of non-lifers in our community.

The nation's pre-eminent historian of technology

Born and raised in Richmond, Virginia, Thomas Parke Hughes served in the U.S. Navy during World War II before earning his undergraduate degree in mechanical engineering at the University of Virginia. He stayed there to get his doctorate in modern European history in 1953. Tom came to MIT in the mid-1960s, when the relatively new School of Humanities and Social Science was trying to figure out how to stock a faculty for an amorphous Course XXI. He was part of a cohort of 13 junior faculty; only one of them (Bruce Mazlish, in history) was ultimately tenured. Along with the rest, Tom departed MIT, first for a temporary appointment at Johns Hopkins and then for a professorship at Southern Methodist University (SMU).

At SMU Tom published a biography of Elmer Sperry (1971), still valuable reading for anyone interested in engineering control systems and their role in 20th century history. Primarily on the strength of this acclaimed study, he was invited to become a professor in the department of the History and Sociology of Science at the University of Pennsylvania. He was 50 years old when he accepted the appointment: it elevated both him and the department to academic fame and glory. Graduate students applied to Penn to work with Tom, and the Philadelphia area became a magnet for historians of technology.

Tom sealed his pre-eminence in the field with the publication of Networks of Power: Electrification in Western Society, 1880-1930 (1983). This was more than a comparative history of electrification in the United States, Britain, and Germany. It was also a manifesto declaring the concept of technological systems, which reoriented the history of technology from a focus on the invention of devices to a focus on the construction of large complex systems. Because such systems are defining structures of modern life, this reorientation confirmed the history of technology as an element of general history.

Tom began to write for broader audiences, most notably in American Genesis: A Century of Invention and Technological Enthusiasm, 1870-1970 (1989), which was a finalist for the 1990 Pulitzer Prize in History. Also in 1990, Tom returned to MIT as a visiting professor. He taught here for a semester and returned for shorter visits to help supervise graduate students and to run workshops on technological systems. The latter involved faculty from across the Institute, especially from the Program in Science, Technology, and Society and from the School of Engineering.

An enduring affinity for MIT

After retiring from Penn in 1994, Tom was elevated to distinguished visiting professor at MIT and spent even more time here. In 1998, he was on campus for two months giving a series of lectures on open technological systems, which he defined as ones exhibiting “a complex mix of technical, economic, political, social, and environmental factors.” His favorite example was the Central Artery and Tunnel (aka Boston’s “Big Dig”), with MIT’s Fred Salvucci playing the role as chief system-builder. The CAT, along with the SAGE computer-based defense system and ARPANET, were featured in Tom’s book Rescuing Prometheus (1998), an influential cluster of case studies of open technological systems.

In a 2002 email to Philip Khoury (then Dean of the School of Humanities, Arts, and Social Sciences), requesting a renewal of his visiting appointment, Tom wrote,

I am so pleased to have the MIT appointment. For years, even decades, I have felt close to MIT, sharing its notable achievements and sensing its problems and opportunities.

He went on to explain why he felt this closeness:

Over the years, I have tried to understand the character of the engineering profession and, in a limited way, broaden its horizons by helping it to see the central role and daunting responsibilities that it has in the modern world. Engineers lament that they are not appreciated. They do not need the appreciation of others so much as they need secure self-esteem. This would come, I believe, if they accepted the messy complexity and moral dimensions of their calling. 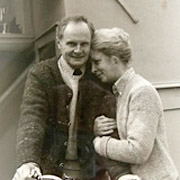 Tom Hughes with his wife, Agatha Chipley Hughes (1924-1997), who, in his words, “expressed herself as wife, mother, teacher, ceramicist, editor, and gardener….In many parts of the world, she created spaces filled with love and beautiful things.” (Photocredit: Birgitta Ralston)

Technology as a part of a broader human history

Tom was already engaged with the problems and opportunities of engineering when I first met him in the mid-Sixties, as a Radcliffe senior serving him as a research assistant. I enjoyed visiting Tom to discuss my assignments, but the questions he asked me to research were sober and difficult. The imprint of World War II was pronounced. He was already studying the Manhattan Project as an engineering project, a topic he later wrote about in American Genesis. He was also, with obvious emotional difficulty, trying to understand the mechanisms of slaughter used in the Holocaust. Many years later I heard him discuss in a seminar the concept of “technological sin” as something both historians and engineers need to contemplate, because the historical world is a sinful one.

Like William Barton Rogers himself, Tom Hughes came to MIT from Virginia with a vision of what technology and engineering mean in the broad context of human experience. Providing scholarly grounding for that vision was a difficult problem — but Tom would quote Sperry to the effect that he chose the most difficult problems because doing this was a way to avoid vulgar competition.


Engineering as inseparable from culture

It took Tom many years in the academic wilderness to redefine technological systems and engineering practice as part of larger history. These views do not come naturally to MIT. We have too much invested in defining engineering as a specialized or semi-specialized activity that brings order and moral clarity to the world. But engineering cannot assume “the central role and daunting responsibilities that it has in the modern world” unless we confront its messy complexities and moral ambiguities. They inevitably arise because engineering is inseparable from political, economic, social, and legal structures and activities. By reminding us of this broad historical perspective, Tom Hughes, MIT non-lifer, made an immeasurable contribution to the life of the Institute.