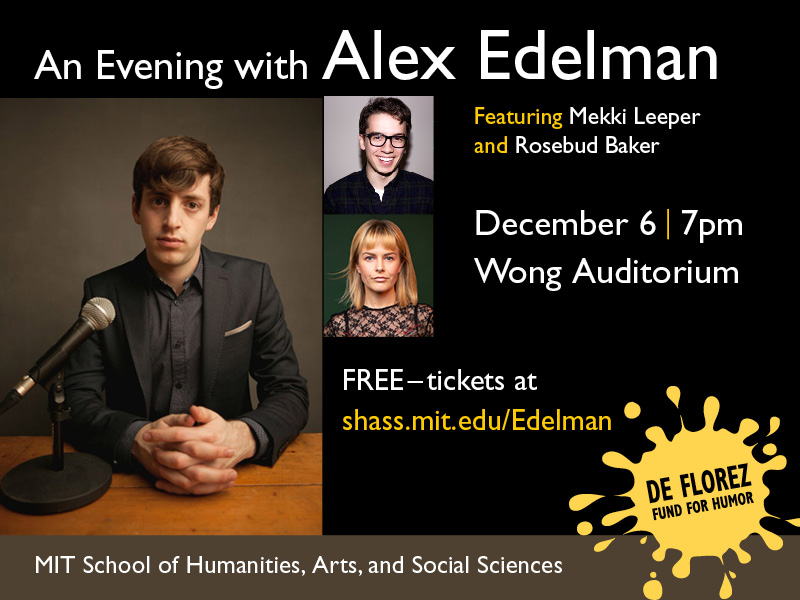 MIT SHASS and the De Florez Fund for Humor welcomes stand-up comics Alex Edelman, Rosebud Baker, and Mekki Leeper to campus for a free performance on Friday, December 6 at 7:00 pm.

Born and raised in Brookline, Alex Edelman has earned honors at the Edinburgh Fringe Festival, the Edinburgh Comedy Festival, and the Melbourne Comedy Festival. He was named one of Comedy Central's "Comics to Watch" and included at #10 in NY Magazine's "50 Comedians You Should Know" list. Beyond stand-up, he is a regular contributor to outlets like The Atlantic and has worked as a speechwriter for the Boston Red Sox and has written and produced documentaries for the U.S. State Department and for ESPN.

"Edelman’s supremely controlled technique and some high-quality gags ensure the laughs seldom falter" writes The Guardian. "From his bulletproof opener about the gorilla who mourned Robin Williams’ death to the quibbling response when a pious friend rejects Edelman’s criticism of his parenting, the jokes are, as ever from this comic, meticulously constructed and smoothly delivered."

Rosebud Baker is a New York-based comedian, actress, and writer. In 2018, she was selected as New Face of Comedy at Montreal's prestigious Just For Laughs Comedy Festival 2018. The Village Voice named Rosebud as The Very Best of Just For Laughs New Faces Showcase, stating ''Baker’s no-nonsense, wickedly dirty routine cut through the evening like barbed wire." Baker’s intensely personal, remorselessly dark brand of humor stood out to viewers in the Amazon Video docu-series, "Inside Jokes" which documented her journey to the festival from auditions, to callbacks, to the showcase itself. Since then, Rosebud has appeared on Comedy Central Stand-up, “This Week At The Cellar,” and “Stupid Questions w/ Chris Distefano.” She has opened for some of the biggest names in comedy, including Michael Che, Bert Kreischer, Colin Jost, and Amy Schumer.

Mekki Leeper is a comedian and writer from Philadelphia now living in Los Angeles. His Comedy Central digital special Control Room is streaming now. His standup has been featured on The Late Late Show with James Corden, Just For Laughs: New Faces, Comedy Central’s Up Next, and he was named a Comedian You Should Know by Vulture in 2018. He wrote for the 2017 White House Correspondents Dinner, and Crooked Media’s Lovett or Leave It. He wrote and directed the digital series Resolutions on Comedy Central. He’s performed at Comedy Central’s Clusterfest, Bridgetown Comedy Festival, and headlines clubs around the country.

Free tickets to this event are available exclusively to members of the MIT community via this link.

Each year, the De Florez Fund hosts two major comedy shows on campus while supporting community projects that share the virtues of good humor with MIT.

Founded in 1988 by MIT alumnus Peter de Florez ('38), the fund supports projects that “impress students with the importance of humor in all aspects of life, both personal and business.” In the words of Jay Keyser, MIT Professor of Linguistics Emeritus, “A sense of humor is to an MIT student what the magic lasso is to Wonder Woman. You can survive without it, but boy does it come in handy.”

Major grants are issued twice annually. The next deadline to apply is February 26, 2017. Those seeking smaller grants—of $750 or less—may apply at any time.

MIT students, staff, and faculty who would like to attend the Alex Edelman show should claim their tickets here.