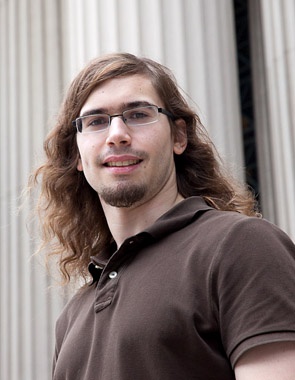 “Learning how to work in another culture and in another language was great. So was playing volleyball with my coworkers near the old Berlin Wall!”

Jason Bryslawskyj, a Class of 2009 physics major, added a German minor to his MIT career after participating in the MIT-Germany program and discovering, he says, how great it was to learn to work in another culture and a different language.

Living in Berlin
Life and new friends in Berlin brought history to life, as did the city’s streets, buildings and even its rubble. “I heard a lot of stories about what it was like to live in a divided city and in East Germany. My favorite experience was playing volleyball with my coworkers on a huge sandy field in downtown Berlin – right next to a section of the old Berlin Wall,” he says.

Fluency in German and Physics
The School’s MISTI program rewarded more than Bryslawskyj’s enthusiasm for living and learning abroad. Fluent in German, thanks to high school and MIT courses, and in the international language of physics, Bryslawskyj worked two summer internships at Siemens AG, the global electronics and engineering corporation headquartered in Berlin.

His hard work in both internships yielded patent applications, which Bryslawskyj’s supervisor at Siemens submitted to the company’s in-house patent office. His first patent, a design for a hybrid superconducting/permanent magnetic bearing, has been accepted by the German patent office and is now pending.

Returning to MIT, Bryslawskyj won the Lufthansa Prize for Excellence in German studies in 2008, and in 2009 he shared his knowledge of Berlin with an MIT group of advanced German speakers, serving as their guide during a January trip to the once-divided city.

His MIT-Germany experience also guides his vision for his future, Bryslawskyj says. He’s starting a doctorate program in physics at the City University of New York in September 2009. After that, he plans to work in Berlin.