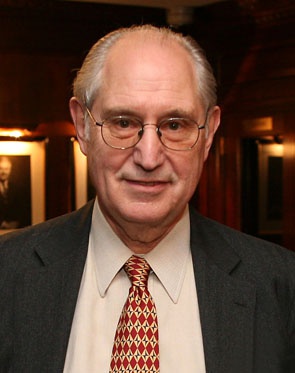 "A grounding in the arts, humanities and social sciences develops the capacity to communicate and to manage solutions—skills necessary to making great ideas work in the world.”

When Ed Hoyt ’57 graduated with a degree in chemical engineering, he did not envision a career in banking. But during a post-graduate year at MIT, he became intrigued by the challenges of overseas economic development. Ed obtained a PhD in international economics from Tufts University and then spent three decades in the international division of Morgan Guaranty Trust. He retired in 1995 after running the bank’s subsidiary in Amsterdam, directing its business in parts of Central and South America and heading its office in Singapore.

The Effects of Literature
In no small way, Ed credits his success in global business management and his abiding interest in literature to undergraduate courses he took at the School. “The professors opened me to a whole area of insight that has stayed with me throughout my life,” says Ed, who with his wife Sarnia now lives in New York City. One especially memorable course explored twentieth-century American novelists. “We probed layer after layer of the text, following its multiple threads,” says Ed, “I never realized that you could do that with a piece of literature. It was engineering of a different sort.

Faulkner and Global Education
“Studying Faulkner and Hemingway,” Ed continues, “I learned to appreciate meanings that lie beneath the surface. This skill was critical in helping me understand the cultural differences among people, an important ability when managing a global enterprise.”

Grateful for his experience, Ed supports his alma mater by directing his giving to the humanities. “MIT has a crucial role to play in solving the world’s problems,” he says. “A grounding in the arts, humanities and social sciences develops the capacity to communicate ideas and manage solutions—skills that are necessary to make great ideas work in the world.”

The Hoyt Humanities Fund
The year after he retired, Ed established the Hoyt Humanities Fund, which enables the dean to support emerging opportunities that benefit faculty and students. Ed and Sarnia regularly host dinners that introduce MIT alumni to distinguished humanities and arts professors. The guest speaker at the November 2008 dinner was Institute Professor John Harbison, a Pulitzer Prize winning composer. “Alumni learn about innovative programs,” says Ed, “and experience the quality and charisma of the School’s faculty.”

Increasing MIT's Service to the World
As a member of the Humanities Visiting Committee, Ed finds that undergraduates value the School’s courses, which broaden their perspectives, and capacity to serve the world. “These young people know that they will contribute to some of the most important advances of our time,” says Ed. “They see the links between their specialties and other fields, and they want to understand and shape the societal implications of their work.”