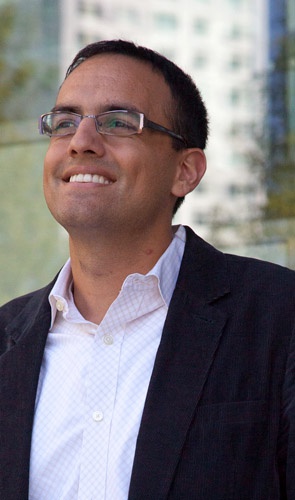 July 2012
President Obama named Parag Pathak as recipient of an Early Career Award for Scientists and Engineers, the highest honor bestowed by the U.S. government on science and engineering professionals in the early stages of their research careers.

“Our undergraduates are thirsty for knowledge and keep us on our toes. As for our graduate students? Our goal is to turn them into our peers as quickly as possible.”


In 1998 as a teenager in upstate New York, Parag Pathak discovered and read A Beautiful Mind, Sylvia Nasar’s biography of mathematician and Nobel laureate John Forbes Nash, Jr. It proved to be a catalyzing book for Parag Pathak—one of the influences that led to his life as an economic scholar with a specialty in game theory.

People and mathematics
"The idea that people's motives and their social interactions could be analyzed formally using mathematics was fascinating to me," he says from his office at MIT, where he is the Economics Career Development Assistant Professor in the School’s Department of Economics.

As an undergraduate at Harvard, Pathak studied applied mathematics and took courses in game theory. He was most inspired by work on the practical applications of game theory (what he calls the “engineering side of economics.”) He studied the problem of how students are assigned to public schools in his dissertation. Since then, he has moved on to study the effects of education reforms and housing markets.

Game theory
Since arriving at MIT in 2008, Pathak has taught courses in microeconomic theory and game theory. His influential papers have considered the properties of matching systems used in “open choice” school systems, such as how they perform when some do not understand the rules. Some of this work involved implementing new systems used in Boston and New York City’s public schools. His most recent papers study the impact of alternative schooling models such as charter and magnet schools.

A house of books and cooking
It is fitting that Pathak discovered the idea for his future in books, as the atmosphere of his boyhood home was as erudite as it was lively. "The house was filled with books," he remembers—as well as the aromas of Nepalese cuisine. The Pathak library today includes his mother’s own award-winning Nepalese cookbook.

“Collecting books is a long-standing family tradition that goes back to my great grandfather in Nepal,” says Pathak. “Though he passed away decades before I was born, he was a well-known Sanskrit scholar with an enormous library.”

Game theory beyond the classroom
Pathak’s parents emigrated to the U.S. in 1970 when his father began a medical residency at Georgetown University Hospital in Washington, DC.  Later, the family moved to Corning, NY, where, Pathak notes, "We were one of two Nepalese families in a town where few had even heard of Nepal!”

Pathak’s expertise in game theory also extends beyond the classroom. His friends and relatives often seek input on how they should “play” in various life decisions. The situations have ranged from how colleagues should select a Cambridge school for their children, to advising his wife, a physician, on how to approach the National Resident Matching Program, perhaps, he note, the most famous example of the "stable matching problem."

Respect for a great tradition
Pathak's tone is reverential in acknowledging the company he keeps and the path he follows at MIT. "I remember walking down the hall in the Sloan building and first seeing the offices of Professor Paul Samuelson, Professor Robert Solow, and others, and thinking, this is amazing—these are the guys who set up the entire field.” He recalls being delighted and awed by hearing Professor Samuelson speak. "He was 93 or 94 at the time, and sharp as a tack.”

Samuelson's advice
“When I being recruited by MIT, I was at the same time being considered for the Society of Fellows at Harvard. A colleague explained the situation to Professor Samuelson—you know, here is this man with two possibilities, what should he do, which should he choose? ‘Both,’ said Professor Samuelson (Samuelson was in the Society of Fellows in 1937 before joining MIT’s faculty). He was in motion the whole time—walking down the hall; he didn’t even stop. But there it was, his answer, without skipping a beat.” Pathak took Professor Samuelson’s advice, first accepting the Harvard fellowship and later coming to MIT.

“I consider it a tremendous privilege to be teaching here,” he says. “Our undergraduates are thirsty for knowledge and constantly keep us on our toes.  As for our graduate students?  Our goal is to turn them into our peers as quickly as possible.”  •