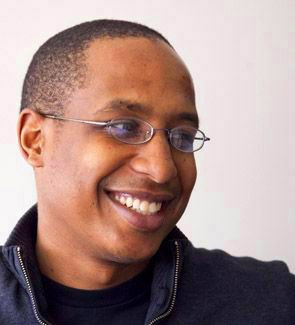 Update: To Physics!
In early 2012, having made excellent contributions to SHASS, Kari moved to the Department of Physics, where he serves as the Financial Officer.

“This community has been integral to my career, to my growth, and to my life.”

Kariuki Thande’s office, just steps from Dean Fitzgerald's office, features two full-size monitors, numbers flowing across them in neat, coded rows, a gallery of family photos and a nice view of the Charles River. The space reveals a lot about what’s important to Thande, the School’s financial administrator since late 2008 and a self-described “total MIT person.”

Nairobi to 02139
For Thande, like so many of us in this era of mobility, "home" is a multi-layered place — of both physical geography and the territories of memory and heritage. Born in Washington D.C. to a Kenyan father and American mother, Kariuki went with his parents to Kenya as an infant, and lived in Nairobi until he was 15. "I am both Kenyan and American," he says, embracing the fullness of his identity. Indeed, Thande first heard about MIT in elementary school in Kenya. His mother, who grew up in Cambridge, wanted him to go to MIT and become an engineer. Now, although his field is finance, his mother's intuition about the value of MIT for her son has been realized. “The School is a great place to work," says Thande. "I had no idea how integral this community would be to my career, to my growth — and to my life.”

Problem-Solving with Colleagues
Thande, who is known as Kari, came to MIT eight years ago, working part-time at the Lemelson-MIT program, which supports new inventions. Thande describes his primary purpose at the School as “making sure we can account for all our dollar bills.” Working with Marc Jones, the School's Assistant Dean for Finance and Administration, as well as with human resources, support staff, and Dean's Office colleagues, Kari supplies budgets to the School’s many academic units. “I enjoy math, and I love technology,” he says. “The problem-solving and working with School colleagues are very rewarding. And I appreciate the family-friendly atmosphere.”

A Man of Faith and Family
His numerous family photos show another side of Thande, husband of Chaline, and father of two children, Tarell, 17, and Selah, 5 months. He balances the patience and attention to detail required by his job with family activities – watching movies together and participating in his church community. A former youth pastor, he is content now to serve as a member of the congregation, while juggling responsibilities of full-time work and full-time family.

Thande is not a sit-still man. The sparkling river view from his office reflects his new love of long walks with his baby daughter, along the Charles. Out of sight but never out of mind is his passion for basketball, a sport he plays with fierce devotion in two venues. He’s in the Cambridge Athletic Club (CAC), playing once a week in that league. And he’s a regular (two to three times a week) at an MIT game that’s been played in Dupont for over 40 years. He’d advise a newcomer to the Institute to “Work hard and play hard!”

Keeping Dreams
He also encourages others to keep their own dreams, and maybe their loved ones’ dreams, alive while working here. Shifting focus from the ever-flickering computers, Thande considers his future. He’d like to pursue a business management degree and eventually, to own businesses. “The School is a great place to be and a great place to move forward,” he says.  •