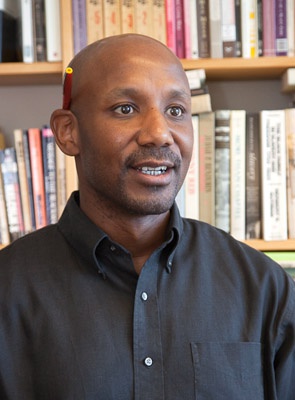 In the Company of Black Men

A Covenant with Color

"Thinking for a living is an extraordinary privilege—
a joy.”


Craig Wilder is a thriving historian—a specialist in urban history, author of noted books, recipient of the University Medal of Excellence from Columbia, and advisor to PBS documentaries. But first he had to convince his Mother.

Convincing Mom
Raised in the Bedford Stuyvesant neighborhood of Brooklyn, Wilder and his sister were the first in their family to attend college. Wilder was drawn to history as a way of understanding the world, but the idea of "thinking for a living" seemed uncertain to him, and more so to his Mother. “To become a historian and scholar, I had to be able to explain the career to my Mom,” he recalls.

Becoming an historian was “way out of my neighborhood,” Wilder says. “When my history professors tried to convince me to become a historian, it made me laugh at first. It seemed an exclusive life, far from my model of success.”

He compromised, becoming a history major, and telling himself he’d go to law school.  But his fate was sealed, or at least shaped by, urban history, in the form of two influential professors with urban roots.

Influential Professors
At Fordham University, Professor Ray Cunningham, an Irish Catholic, brought up in Brooklyn, offered his own beginnings as an example. At Columbia, where Wilder earned his PhD., Professor Mark Nathan encouraged him further.

“He mapped it all out for me, explaining how you would pursue a career as a historian, what graduate school would be like, what the career would be like. He emphasized the intellectual life—reading, writing, defining projects. He told me about himself as a young Jewish kid heading off to Columbia. I realized the academy was not this fixed thing, that it could be what I made it.”

He taught history at Williams from 1995-2002, then joined the history faculty at Dartmouth, where he also taught for seven years, joining the faculty at MIT in 2008. In the classroom, Wilder engages students in the unedited material of a time, including—in the case of west Africans who became enslaved—ritual markings, sales documents, transcripts of court cases of slaves who rebelled.

The Materials of Time
Students and teacher work toward understanding and meaning, sometimes developing a new language to convey their discoveries. When Wilder worked on In the Company of Black Men, his 2001 book about Creole culture in NYC, he worked through many ideas in the classroom. “If I can explain it to my students, I can explain it in a book."

The Joy of Thinking
Of his work as a historian, Wilder says, “The part of my job I most appreciate is being paid to think. When I’m by myself in a library looking through dusty old books, or sitting in a classroom—explaining, debating with students who bring the same energy to thinking that I do—it’s never dull. It’s an extraordinary privilege—a joy.”

In the Company of Black Men

A Covenant with Color