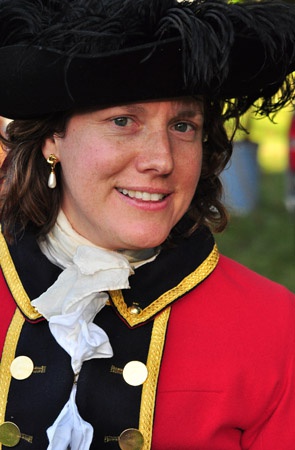 "Working with people you admire and enjoy is a privilege.”

Andrea Wirth brings vibrant new meaning to the phrases “suit up" and "show up.”

First, the showing-up part. “I love my job," Andrea says. "I work with some of the most energetic and creative people on campus. There is a lot of laughter in the classrooms, and I love to hear students having a good time. Classes are small and meet almost every day, which makes for a supportive atmosphere in our section. Working with people you admire and enjoy is a privilege.”

Many Hats
Wirth, whose degree in percussion performance is from the University of Michigan, has worked in FL&L since July 2003. The School offers courses in Chinese, French, German, Japanese and Spanish—80 classes each semester—and it also has an English Languages Studies program.

Wirth coordinates all aspects of the School’s foreign language classes—rooms, books, grades, advising, catalog, scheduling, and enrollment data. She says she must know “a little of bit of everything—facilities, accounting, travel, event planning, publishers, academic policies.” Sometimes, she is also the section’s photographer.

Percussion
Wirth’s enthusiasm for her work and her delight in community extend to her “serious hobby,” playing a rope-tensioned field drum in the Middlesex County Volunteers Fifes and Drums. And that's where she brings new meaning to “suiting up.”

For the past 20 years, Wirth has donned a Revolutionary War musician’s uniform, picked up her drum (a reproduction of sixteenth century Swiss technology) and marched in the 45-member Fife and Drum Corps. The group plays at local events, such as the Boston Harborfest and many July 4th celebrations, and at international military music shows like the renowned Edinburgh Military Tattoo.

Performance
The suiting up doesn’t stop there. When Wirth isn’t performing in the fife and drum corps, she’s often wearing other historic hats: she’s a Revolutionary War re-enactor who can play a drummer boy or a private soldier in a recreated British Revolutionary War regiment. Her extensive personal costume department also enables her to play an eighteenth century British lady, complete with hoop skirt, as she will for a Revolutionary-era Epiphany Ball in January 2010.

If the day were longer...
Like many people at MIT, Wirth often imagines a day that contains more than 24 hours. If that dream came true, she says, she would add playing in the MIT Symphony Orchestra, and in Rambax, MIT’s Senegalese Drumming Ensemble. (In modern clothes).