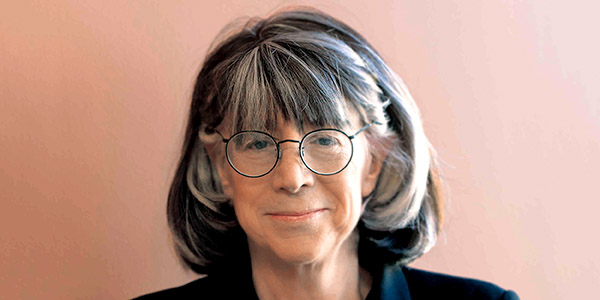 "We hope to integrate computing with just about every other subject at MIT...This is a very serious asignment, one that could have global consequences."

— Susan S. Silbey, Chair of the MIT Faculty, Goldberg Professor of Humanities, Professor of Sociology and Anthropology, and Professor of Behavioral and Policy Sciences

Hello. I am Susan Silbey, Chair of the Faculty. On behalf of the 1040 members of the MIT faculty, I would like to welcome you to this historic event.

This is an historic moment locally, as we celebrate the opening of the MIT Stephen A. Schwarzman College of Computing. We may produce disruptive innovation but we are organizationally quite conservative. It has been over 65 years since MIT has added a new school.

This is also an historically important time beyond MIT and across the globe. Today, more people — across wider swaths of this earth than ever before in human history — enjoy the rights and privileges of citizenship, by which I mean the ability to participate in self-governance.

Yet, at this very same moment, those legally protected rights and privileges of citizenship are subject to more powerful, significant, and disruptive challenges than ever since the 2500-year-old aspiration became the foundation of the modern democratic state.

We live in a new world order.

The very same technologies — the internet, search platforms, and social media — that join people across the globe in more robust, interactive, and widespread connections also threaten our democracies.

We live in a new world order, a radically new organization of time and space, of people and things. Vast temporal, spatial, and cultural distances are bridged; social organizations based on similarity and proximity have been transformed into functionally interdependent connections among very different and very distant people. The quantity and pace of social interactions have increased geometrically. The everyday lives of the majority of people in most social classes all over the globe are constituted by more encounters, of shorter duration, over greater distances than ever before.

This is life on the internet.

In this escalating, energetic circulation of information and exchange, threats to democratic citizenship take root. We do not simply use the internet — as a tool — to shop, find information, or just keep track of appointments and friends. With every click, search and view, we — the users — supply the information for the algorithms to analyze and the platform companies to sell. We supply the fuel — the inputs — the raw materials of what is now a world of constant digitized surveillance, and as a consequence, we, the users, become objects that are themselves used.

A global architecture of computer mediation produces distributed and largely uncontested new and controlling forms of power (which despite its distribution, is concentrated in a hub of less than half dozen firms). This new world is constituted by unexpected and often illegible mechanisms of extraction, contractually permitted and regularly improved monitoring, personalization and customization, continuous experimentation, commodification and control, that effectively exile persons from their own behavior — while producing new markets of behavioral prediction and modification.

At this moment in history, the internet distributes more information than has ever circulated so freely in human history. At the same time, as the circulation of knowledge advances, the threats to expertise and truth escalate, challenging democratic norms and the centuries long evolution of democratic citizenship.

How did this happen?

First, the inventors of the internet overlooked the essential role of context in shaping the uses and consequences of technology. A tool made for physicists to exchange data on a platform built for the military was given to the world. Something built for a normatively cohesive and highly disciplined community was distributed to a world ungoverned by shared norms of participation.

If the first problem was ignoring context, the second was generalizing from oneself: “This is such a good technology for us, it will be good for everyone.” By seeing themselves as "everyman," the inventors ignored human variation. They forgot to user test with diverse populations.

What do we do now?

Observers have been suggesting some possible fixes of various scales and probability. Our colleague Tim Berners-Lee is working on his “Solid” platform to re-decentralize the web. Others suggest legal regulation, and information fiduciaries. Some mention ethics boards for the major internet platforms and social media.

Here is the great opportunity of the Stephen A. Schwarzman College of computing — to pursue all three lines of exploration and yet much more we have yet to imagine.

An education in societal issues, ethics, and technology

We hope to integrate computing with just about every other subject at MIT so that students leave here with the knowledge and resources to be wise, ethically and technologically competent citizens and professionals.

This is a very serious assignment, one that could have global consequences.

And no one understands that better than our next speaker. Since 2012, Rafael Reif has served as the 17th president of MIT.

As many of you already know, he is a person who makes no small plans! Rafael spearheaded the creation of MITx and edX, MIT’s pioneering efforts to help shape the future of higher education. A champion for both fundamental science and for MIT’s signature style of interdisciplinary, problem-centered research, he recently cut the ribbon on MIT.nano, the largest, most open facility of its kind in the country.

He created a new organization, “The Engine,” to help tough-tech start-ups thrive, and he is leading a decade-long redevelopment of Kendall Square, and recently raised the goal of MIT’s capital campaign to $6 billion.

So, it is no surprise that he had the bold idea to create MIT Schwarzman College of Computing. I have been pleased to work closely with Rafael — and with Provost Marty Schmidt, and Dean of Engineering Anantha Chandrakasan — as the College took shape.

And it is my pleasure to introduce him to you now. Please welcome MIT President Rafael Reif.

The Human Factor: Anthropologist Susan Silbey on solving major global issues
"Transferring the models of physical matter or rational calculation to these massive global problems can do a great deal to help solve our current issues — but only when they are informed by a nuanced understanding of how humans and human organizations operate."

Why do women leave engineering?
Study analyzes the issue and proposes remedies.