Ways of seeing the world | Anjali Nambrath '21
Physics, mathematics, a minor in French — and a deep love for theater 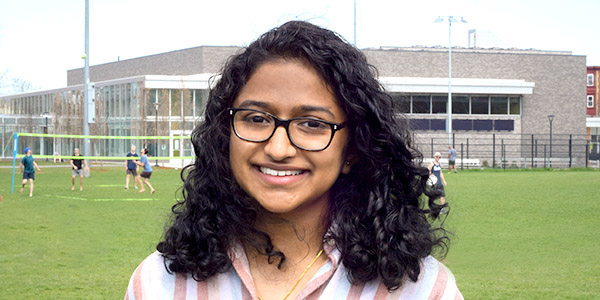 Nambrath says learning to see the world through a wide variety of lenses is crucial to success in her field. In physics, she explains, “the whole point is to find new ways of looking at the world. I think it’s super important as a human being to push the boundaries of knowledge, to find out more.”

Anjali Nambrath graduates from MIT with a double major in physics and mathematics, but her big project in her senior year winter didn’t center on neutrinos, the subject of her undergraduate thesis. Instead, she worked on translating Hurlevents, a Quebecois play by Fanny Britt, from French into English.

“I just fell in love with the play,” says Nambrath, who has also earned a minor in French. She started the translation project during 21M.716/"Play Translation and Cultural Transmission," a class taught by Professor of Theater Claire Conceison. “It’s a play that entertains and makes you laugh, but in the end leaves you with serious issues to mull over. I think it’s nice when humor is used to gently introduce you to something.”

Nambrath, who has been involved with the Shakespeare Ensemble throughout her time at MIT, says her studies in the Institute's arts and humanities fields as important for her future as her training in the science fields. “I’ve learned just how special it can be to swap out the lenses with which you view the world,” she says.

Studying French has been particularly valuable, she notes, because the approach of the Global Languages program enabled her to explore a wide range of other subjects as a part of learning French. “I’ve read literature, learned about history, and watched great films. Everything I’m interested in has been bundled into this program. It’s been a window into all these other fields,” she says. 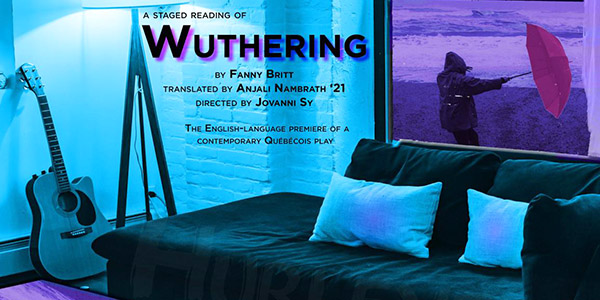 An English-language premiere | April 30, 7pm, 2021
A staged reading of Nambrath's translation of the play "Hurlevents" ("Wuthering," in English) takes place on April 30, performed by a cast of professional actors. Nambrath captures the wit and linguistic sparring of Britt’s script in English, presenting relatable characters as they navigate the stormy process of coming to terms with their pasts, present, and the future.
More information + register for the reading

Pushing the boundaries of knowledge

Nambrath’s goal is to become a practicing physicist in an academic institution and says learning to see the world through a wide variety of lenses is “crucial” to success in her field. In physics, she explains, “the whole point is to find new ways of looking at the world.” “I think it’s super important as a human being to push the boundaries of knowledge, to find out more.”

To that end, Nambrath has been an active participant in MIT’s Undergraduate Research Opportunities Program. Through the UROPs, as they are called on campus, she had the chance to work on an experimental program that is searching for hypothetical elementary particles called axions, for example, and is currently exploring a new way to look at neutrinos, a type of subatomic particle. Her undergraduate thesis, based on research conducted in the lab of Assistant Professor Or Hen, applies data gained from electrons to facilitate an analysis of neutrino behavior.

Very cool: from theory to the Fermi Lab to teaching quantum to kids

This project gave Nambrath the opportunity to work at the Fermi National Accelerator Laboratory in Illinois — a memorable highlight, but only one of several during her time at MIT. “A lot of the research I’ve done has been very cool,” Nambrath says. “At MIT you can just show up and really dive in. I’ve done some hardware, some computational analysis, some theory. It’s fun to really dip your toes into all of that.”

Nambrath is the current president of the MIT Society of Physics Students, and also enjoys sharing her love of science through the MIT Educational Studies Program, which over the past few years has given her the opportunity to teach a range of topics from black holes to the history of science to middle and high school students. “I ran a course on quantum computing, and the kids would ask all sorts of crazy questions,” she says. “It’s nice to be confronted with that enthusiasm. Sometimes when you’re doing problem sets week after week, you can think: Why am I doing this? When you’re teaching, you’re reminded of why what you’re doing is cool.” 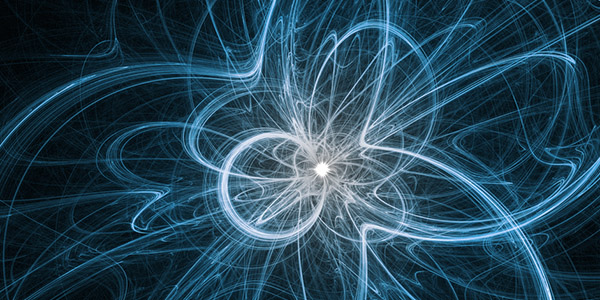 Image of a neutrino; Shutterstock

”I love physics — understanding what’s fundamentally going on in the universe is an ambitious, humbling, and exciting endeavor to be part of. But if my life were only physics, I would feel very limited. French and theater, literature, history, and film — all of these things keep me whole.”

The passionate people of MIT

This excitement about research and learning is exactly what first attracted Nambrath to MIT. “One of the greatest things about MIT for me is, no matter what people are doing, they are so passionate about it,” she says.

Translating "Hurlevents" — which is loosely based on Emily Brontë’s Wuthering Heights — into English turned out to be one of those passions for Nambrath. The project began as a class assignment which called for students to translate a scene from a play that had never been translated before.

“A colleague of Professor Conceison’s sent me this Quebecois play and I was hooked by the language and wit and also its scope,” says Nambrath, who later chose to finish translating the entire play as an independent project. She worked with both Conceison and Catherine Clark, an associate professor of French Studies, to complete the project. And now — voila! — a staged reading of the play (by professional actors!) is scheduled take place online on April 30.

All of these things

“I didn’t realize how crucial translation work is until I did it,” says Nambrath, noting that working on the project has given her insight into the French-speaking people of Quebec, Canada. “Quebec is just north of the U.S. border, but few here in the States seem to understand much about the culture,” she says. During the translation project, she became aware of the tensions that emerge between the province’s Francophone community and the broader, English-speaking Canada. “There is a very complex play of identities," she notes, "and some really interesting politics surrounding language.”

Soon Nambrath will head off to graduate school in particle physics at University of California Berkeley, where she plans to continue looking at the world through the many lenses she has discovered during her MIT education. ”I love physics; understanding what’s fundamentally going on in the universe is an ambitious, humbling task, and exciting endeavor to be part of. But if my life were only physics, I would feel very limited,” she says. “French and theater, literature, history, and film — all of these things keep me whole.”

On Quebec and Language