“These great rent strikes were largely a consequence of the almost complete cessation of residential construction during and after World War I,” says Fogelson, a professor of urban studies and history. “Builders stopped building. Investors stopped investing. The result of this was a very serious housing shortage.” The city’s vacancy rate dropped to a fraction of 1 percent.

As a consequence, rents soared, and a new social movement cropped up: Renters started organizing rent strikes to protest the punitive monthly housing costs they faced.

“The most active strikes were in working-class neighborhoods,” Fogelson says; they often occurred in Jewish immigrant neighborhoods such as Brownsville and Williamsburg in Brooklyn. “Women played a large role, staffing the picket lines, fighting with landlords, trying to head off the police.” Women had organized strikes against the garment manufacturers, he adds, and now “applied some of the same tactics to landlords and housing.” 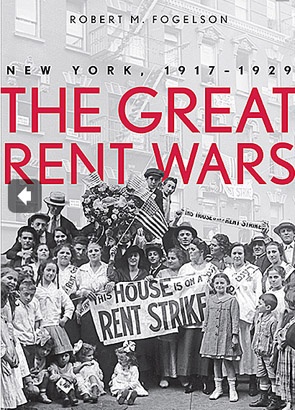