ECONOMICS: ABDUL LATIF JAMEEL POVERTY ACTION LAB
Abijit Banerjee and Esther Duflo win the Nobel Prize for economics
Duflo and Banerjee, whose work has transformed poverty alleviation research and policy, have won the 2019 Sveriges Riksbank Prize in Economic Sciences in Memory of Alfred Nobel, sharing the prize with a longtime affiliate, economist Michael Kremer of Harvard. In their work, they have applied the precision of laboratory-style randonmized control trials while examining the many attributes of poverty and developing effective poverty alleviation programs.
Story by Peter Dizikes at MIT News | Video: Press Conference at MIT 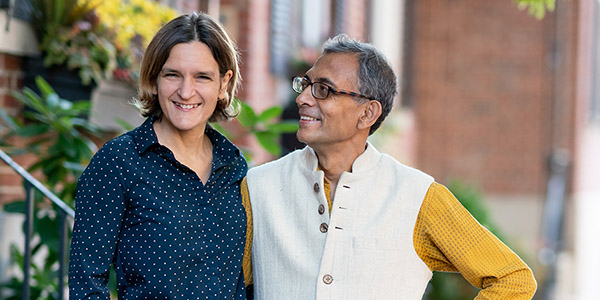 HISTORY
Kenda Mutongi named finalist for Elliott P. Skinner Award
Conferred by the Association for Africanist Anthropology, the award goes to the book that best furthers both the global community of Africanist scholars and the wider interests of the African continent.
About the award | Mutongi's webpage

LINGUISTICS
QS World University Rankings rates MIT, Lingistics No. 1 worldwide
This is the seventh straight year that QS has ranked MIT the top university in the world. QS has also ranked Linguistics as no.1, and Economics no.2 worldwide. Earlier this year, Times Higher Education (THE) ranked MIT No.2 worldwide for the "Arts and Humanities" and No.1 worldwide for Economics and Business for 2019.
QS story at MIT News  | Times Higher Education rankings

ECONOMICS
Nikhil Agarwal among four MIT professors selected as 2019 Sloan Fellows
Nikhil Agarwal, the Castle Krob Career Development Assistant Professor of Economics in the School of Humanities, Arts, and Social Sciences, studies the empirics of matching markets. The Sloan Fellows are nominated on “the basis of a candidate’s research accomplishments, creativity, and potential to become a leader in his or her field.”
Story at MIT News

CMS/W: SCIENCE WRITING
Seth Mnookin receives NEH grant and a Guggenheim award
Mnookin has been awarded a 2019 grant from the National Endowment for the Humanities for his work on a historical and contemporary narrative of aging and longevity research, reviewing the scientific and cultural implications of extending the human lifespan. He has also received a Guggenheim award from the John Simon Guggenheim Memorial Foundation, which offers Fellowships to artists, scholars, and scientists in all fields. Mnookin is the award's sole recipient this year in Science Writing.
2019 NEH recipients | Guggenheim announcement | Mnookin's MIT webpage

ECONOMICS
Indira Puri named a 2019 Paul & Daisy Soros Fellow
Selected from a pool of 1,767 applicants for their potential to make significant contributions to United States society, culture, or their academic fields, the 2019 Fellows are all the children of immigrants, Deferred Action for Childhood Arrivals (DACA) recipients, green card holders, or naturalized citizens. Indira Puri is a PhD candidate in economics. With degrees in mathematics, computer science, and economics, Indira draws on her multifaceted experience in approaching research.
Story | Past Soros Fellows from MIT


PHILOSOPHY
Augstín Rayo honored as an outstanding mentor for students
Rayo is a Professor of Philosophy and the Associate Dean for the School of Humanities, Arts, and Social Sciences.
Story at MIT News


ANTHROPOLOGY
Susan Silbey receives the Killian Award, MIT's highest faculty honor
The award citation states that “Professor Silbey is a world-renowned sociologist of law, celebrated for her groundbreaking work on legal consciousness and regulatory governance, most recently in scientific contexts," and that “in order to understand how the rules of law operate, we need to see how they are interpreted, defended, negotiated, and resisted by people as they do their jobs and go about their daily lives.”
Story | Susan Silbey

Susan Silbey, Leon and Anne Goldberg Professor of Humanities, Sociology, and Anthropology in the School of Humanities, Arts, and Social Sciences; and, in the Sloan School, a professor of behavioral and policy sciences

ECONOMICS
Daron Acemoglu receives the 2019 Global Economy Prize
"The Global Economy Prize is awarded to pioneers of a cosmopolitan, economically liberal, and public-spirited society. The jury's reasoning: Daron Acemoglu is an economist in a league of his own, not only because of his outstanding theoretical work, but also because he dares to write up his research findings in such a way that they are accessible to a wider audience.
About the Award | Daron Acenoglu website

SCIENCE, TECHNOLOGY, AND SOCIETY
Dwaipayan Banerjee receives 2019 Levitan Prize in the Humanities
Assistant Professor Dwaipayan Banerjee of MIT’s Program in Science, Technology, and Society has been awarded the 2019 James A. (1945) and Ruth Levitan Prize in the Humanities. The prestigious award comes with a $29,500 grant that will support his research into the history of computing in India.
Story | Banerjee webpage

ECONOMICS
Simon Jäger, Samuel Young, and Sean Wang receive grants
from the Washington Center for Equitable Growth
The topics of the funded research are central to addressing the challenges faced by U.S. workers and their families. Erin Kelly, Hazhir Rahmandad, and Alex Kowalski, all of the Massachusetts Institute of Technology, will collaborate with a warehousing firm to study the impacts on both workers and the firm of unpredictable scheduling.
Equitable Growth announcement

CMS/W: SCIENCE WRITING
Marcia Bartusiak wins the American Institute of Physics Science Writing Prize
In her most recent prize-winning book, Dispatches from Planet 3, Bartusiak delves into the untold backstories of momentous astronomical discoveries and shares a profound understanding of the nature of the universe. This award marks the third time Bartusiak has received the AIP's Science Writing Prize.
About

COMPARATIVE MEDIA STUDIES + CSAIL
Fox Harrell recieves MIT.nano seed grant
The grant is for Harrell's work on gaming on technologies, to "teach users how to recognize, cope with, and avoid committing microaggressions."
About

POLITICAL SCIENCE: SECURITY STUDIES
Vipin Narang receives ISSS 2020 Emerging Scholar Award
The award recognizes scholars who have made (through their body of publications) the most significant contribution to the field of security studies.
About

ECONOMICS
MIT ranked No. 1 worldwide for Economics and Business
Times Higher Education awards top honors to fields in MIT SHASS and MIT Sloan for the second year in a row.
Story by MIT SHASS Communications

LINGUISTICS AND COMPARATIVE MEDIA STUDIES
Two MIT SHASS faculty elected to 2019 AAAS
The newly elected members from SHASS are Suzanne Flynn, professor of linguistics and language acquisition, and professor Eric Klopfer, Head of the Comparative Media Studies/Writing program and director of the Scheller Teacher Education Program and The Education Arcade at MIT.
Story at MIT News

MUSICOLOGY
Emily Richmond Pollock awarded 2019 Kurt Weill Prize
Pollock received award for her article, "Opera by the Book: Defining Music Theater in the Third Reich," published in 2018. The prize is given every two years and recognizes an outstanding article on opera or musical theater since 1900.
Learn more

CSAIL + CMS/W:  MIT CENTER FOR ADVANCED VIRTUALITY
"In Event of Moon Disaster" wins Special Jury Award for Creative Technology
This innovative video installation is educating the public about the global challenge of computer-based misinformation in a world "fraught with challenges over the question of truth." Developed by Fox Harrell, Francesca Panetta, and Halsey Burgund, it received the Special Jury Award at the IDFA DocLab Competition for Digital Storytelling. The video uses "deepfake" technology to reimagine the story of the moon landing.
Story by MIT Open Learning | IDFA Jury Award