You may be interested in American literature, folklore or popular culture; in black history and culture; in women’s studies; in American history, politics or law; in the history of science and technology; in American art, architecture or music—whatever the special focus of your interests, American Studies may be the right major for you. American Studies gives you a chance to study American society and culture through its history, literature, art, politics, science, music, etc. by constructing interdisciplinary programs, made up of subjects drawn from different disciplines, centered on your particular interests.

The Major in American Studies consists of a minimum of nine subjects (108 units) beyond the pre-thesis and thesis. Remaining subjects selected from at least two of the three disciplinary areas.

Area I: Humanities and the Arts

Up to six subjects (72 units) may be used for both the major and the GIRs, but the units from those subjects may not count toward the 180 units required beyond the GIRs. No more than one HASS Distribution class may be counted towards the major and towards the HASS Distribution Component of the GIRs. Of the subjects required for the major, at least eight must count only toward this major (and not toward any other degrees, major or minor).

A major in American Studies will well prepare you for further work not only in the various humanistic fields but also in law, urban planning, management, architecture, engineering, medicine, teaching, and any of the media. Consult the American Studies Major Advisor with any questions.

This list is not exhaustive. Relevant subjects that are no longer offered and subjects with variable topics (such as “special subjects” or “selected topics” courses, for example) may also be counted at the discretion of the major advisor.

Additional information can be obtained by emailing shass-ug@mit.edu. 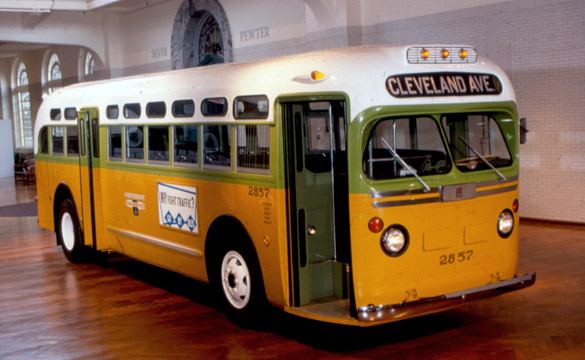 On December 1, 1955, Rosa Parks boarded a Montgomery, Alabama city bus on her way home from work. When she was told to take a seat in the back of the bus, then the custom for African-Americans, Miss Parks quietly refused. News of this incident spread quickly and led to a city-wide bus boycott led by a young Martin Luther King, Jr. This is a photograph of the bus, now restored, that Miss Parks was riding the day her courageous action helped spark the modern American civil rights movement.
— from the National Trust for Historic Preservation