On Writing at MIT
A few comments from Steven Colbert, Junot Díaz, and MIT Alumni

"Writing at MIT?  Isn’t that like teaching engineering at Juilliard?"

Here's how some MIT alums have responded to Colbert's quip —
via the MIT Alumni Association's social media page:

Having earned a degree in writing from MIT, I heartily endorse taking EE at Julliard!

I took lots of humanities courses (21.xx) while an MIT undergraduate in course 6, and was derided by my more technical friends for "wimping out." However, 45 years later, I attribute any success I enjoyed in my career as much to learning to express myself coherently in writing (and later, in speaking) as to anything I learned and subsequently practiced as an engineer.

This mix of humanities and engineering was the greatest aspect of my MIT education. It's one thing to have the technical knowledge to develop creative ideas; it's quite another to be able to express them. To be able to do both with some fluency is what I believe a "liberal education" is all about.

Funny thing—I took "Fantasy and Science Fiction" as part of my Humanities requirement at MIT from Prof. Susan Anderson in, oh, '73 or maybe '74. We were to read an SF or Fantasy book or two a week, write up 3 pages on it, and then talk about it. The second week of the course, Professor Anderson walked into the room. "I have all your papers here," she said—and then literally threw them into the room. They scattered all over the room and us.

"They're terrible. You all belong to one of the best schools in the world and not one of you can write. You all think that the bigger the words you use and the longer your sentences are the better your writing is. I'm turning the next six weeks of this class into a writing course. You are all going to learn how to write a simple declarative sentence!"  She did. We did.

I haven't used anything I learned in 8.01 or 18.01 or 5.60 for years. But I use what I learned in that class every day, and I am repeatedly complimented on my writing skills, generally along with a remark that such ability is rare in someone technically accomplished.  It has been a lasting boost to my career. 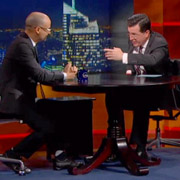