MIT AND THE LEGACY OF SLAVERY | COMMUNITY DIALOGUES

The Task of History: MIT historians on the power of historical knowledge to help make a better world 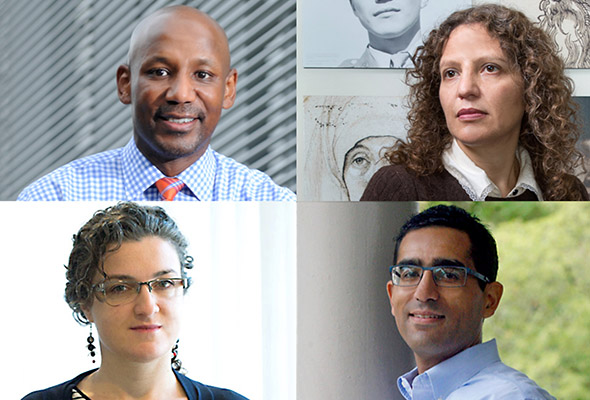 “One of things historians do is analyze how systems of power are constructed — state power, corporate power, racist power — and what role different institutions play in that.”

The first class of the "MIT and Slavery" undergraduate research project ran in the fall of 2017, set in motion by MIT President L. Rafael Reif with Dean Melissa Nobles. As the research project continues over coming semesters, MIT is also conducting a community dialogue series that creates opportunities for shared discussions of the early findings and our responses to the emerging research. At the first dialogue event, students presented their research findings. This story reports on the second event, The Task of History, which was designed to share insights about the nature of historical research and the role of historical knowledge in making a better world.

"Today’s world is constructed on the injustices of the past…. Where we are is no accident.”

Those remarks by MIT historian Tanalís Padilla reflect the overarching theme of “The Task of History,” a May 3 event that brought four MIT historians together for a panel discussion centered on why it’s important to understand history — particularly for a forward-looking institution such as MIT.

“The Task of History” was the second event in an MIT community dialogue series launched in response to the MIT & Slavery project, which this winter revealed some of the Institute’s complex linkages to the slave economy of the 19th century and to ongoing legacies of slavery. The project was begun at the behest of MIT President L. Rafael Reif.

Padilla remarked that the task of investigating MIT’s ties to slavery is an example of the kind of contribution historians make. “One of things historians do is analyze how systems of power are constructed — state power, corporate power, racist power — and what role different institutions play in that,” she said. “I hope we are asking those same questions … about the present.”

What gives us the right to interrogate the past?

The springboard for the evening’s discussion was a set of questions drawn from those posed by members of the MIT community, including alumni, about the MIT & Slavery project. Melissa Nobles, Kenan Sahin Dean of MIT’s School of Humanities, Arts, and Social Sciences, served as moderator.

The panelists began by examining some of the assumptions in the first question: “What gives us the right to interrogate the past or to make judgments about people and cultures of earlier times by our contemporary values, laws, and worldviews?”

"The past is never dead; it's not even past."

It’s not a question of interrogating history so much as understanding it,” said Malick Ghachem. “Most of the historians of slavery I know aren’t really interested in judgment first and foremost; they want to dwell with this story to be able to understand it, and then to draw some conclusions that perhaps involve an element of judgment. But understanding is the focus.

The other word that’s tricky in that question is the word 'contemporary.' It’s not so clear to me that there is such a sharp separation between history and ‘the contemporary,’ which is what is implied in the notion that we today are passing judgment on a past that is separate from us.”

Wilder agreed. “The separation between past and present is often an artificial one and a convenient one. It tends to be a kind of barrier we throw up when we become uncomfortable with certain kinds of historical and political inquiries.” He went on to frame this idea within the context of slavery. The idea of such separation “pretends that people living in the past are morally less complicated than we are — that people in the past didn’t understand that slavery was wrong.” But, Wilder said, “there is no moment in the history of slavery when people don’t know that slavery is wrong. I may point out that the slaves knew it was wrong — and they were people.”

The springboard for the evening’s discussion were questions from members of the MIT community about the MIT & Slavery project. Melissa Nobles, Kenan Sahin Dean of MIT’s School of Humanities, Arts, and Social Sciences, who is leading the Community Dialogue series, posed the questions and served as moderator.

The power of historical knowledge

Nobles also asked the historians to give examples of how a deeper understanding of history can help us build a better future and improve conditions in the present.

Ghachem, who teaches an MIT course on race, criminal justice, and citizenship, said that “one of the things we have gained from a more profound history of mass incarceration is better law.” Until about 30 years ago, he explained, there was very little awareness of “the outlandish size of our criminal system, particularly in comparison to our peers in the North Atlantic world. It was because of a couple of generations of scholarship — people writing about the racial embeddedness of our system, and the sheer size of it — that we began to make criminal justice reforms. That’s an example of how historical inquiry has transformed a fundamental aspect of our contemporary society.”

Another tangible benefit of studying history, he said, is to increase respect for peoples, and even entire countries. “For example,” he said, “through much of the 19th and 20th century, people looked upon Haiti as a country that was underdeveloped through its own cultural faults. That view has gone away because several generations of historians have shown how important [and detrimental] slavery was to the development of the Haitian nation.” And for the Haitian people themselves, he observed, understanding how this history was transformed by the Haitian Revolution of 1789-1804 can provide some sustaining optimism and hope.

Ekmekçioğlu said she has seen a similar transformation related to her area of scholarship, the 1915 Armenian genocide in Ottoman Turkey. "Turkey has long refused to acknowledge its crimes — which has kept tensions high between ethnic Armenians and ethnic Turks," she said. But as the history has become better known, Ekmekçioğlu has seen a remarkable change in attitudes in Turkish civil society, although the state's official stance remains more or less the same.

“Right now at MIT,” she said, “the Armenian Student Association is doing an exhibition to commemorate the Armenian genocide and I heard that some members of the Turkish Student Association came and … wanted to learn more. This would have been unthinkable only 10 years ago,” Ekmekçioğlu explained. After the event, she added, "I am now hopeful that historians' efforts will yield more fruit for the future, and will lead the way towards restorative justice in general."

Being informed by successes and tragedies of the past can be a peerless guide. "When we make declarations about the tomorrow that we want to see, those declarations have to be informed by a really rigorous and honest engagement with the past," Wilder said, "because we aren’t the first people to think we are doing good work."

Models for making a better world

Padilla, who studies agrarian protest movements in modern Mexico, said history also offers up many practical lessons and models for people working to make a better world today. “Looking at past movements of resistance helps current people think of different strategies, of ways of resisting, and of alternate visions of what something might look like,” she said. She gave the example of teacher training schools in Mexico where youth from poor backgrounds learn about their rights, justice, and leadership. While the government has attempted to close these institutions, Padilla says, “that many still exist is thanks to the fact that the graduates and communities know the history of those schools” and protect them.

“Another broad example,” Padilla added, “is the history of indigenous peoples in Latin America in general. These peoples have suffered centuries of discrimination and genocide, and the fact that they have preserved their history and their traditions has forced government after government in Latin America to recognize their rights and to negotiate with them.”

“The same with the Armenian case,” said Ekmekçioğlu. “The production of historical knowledge is itself an actor in the fight for recognition and reparations. In the last 15 years there has been in a boom in studying the Armenian genocide, as well more historical attention to other non-Turkish groups — such as the Kurds, Jews, and Greeks of Turkey — that has led to a new kind of thinking about who we are. It’s like the movements of indigenous people to sustain themselves; scholars working on Armenian history too try to produce as much as possible to have evidence for the time when the Turkish state will officially acknowledge its 'dark past.'"

Building on these examples, Wilder noted that studying the struggles of the past and others helps us see the challenges in our own lives as part of a larger human story, “For me,” he said, “the real joy of history is that it helped me to discover my own humanity [and] expand my sympathies.” Similarly, he reflected, more understanding of the past “opens the door to more aspirational conversations about MIT today.”

The panel discussion was followed by a question-and-answer session, during which the historians responded to questions ranging from how technology is transforming historical research, to the role historians play in effecting change, to how MIT can best use its influence in the service of making the world a better place.

Wilder pointed out that every generation lays claim to “inventing the future” and that the history of some of those efforts is troubled. Being informed by successes and tragedies of the past can be a peerless guide, however.

“When we make declarations about the tomorrow that we want to see, those declarations have to be informed by a really rigorous and honest engagement with the past,” he said, “because we aren’t the first people to think we are doing good work.”

Webcast: The Task of History

Stories, Events, Videos: MIT and the Legacy of Slavery project

Media and Resources: MIT and the Legacy of Slavery project

Video: MIT and the Legacy of Slavery

MIT SHASS story: 3Q with Melissa Nobles and Craig Wilder on the MIT and Legacy of Slavery Community Dialogues

"The past is never dead; it's not even past."
— William Faulkner, Requiem for a Nun

Photographs:
Top images by Richard Howard, Allegra Boverman, and Jon Sachs
Photograph of Dean Nobles by Justin Knight
Collage by SHASS Communications; historical image: detail of photograph from the 1963 March on Washington for Jobs and Freedom