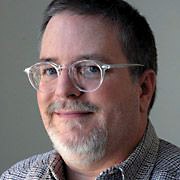 Composer's Note
"This is a setting of R.G. Villet's poem 'Penny Ballad of Elvious Ricks.' A particular glory of Vliet’s writing is the precision with which he delineates the culture of late 19th/early 20th century rural Texas. The speech patterns in the poem are those of the first voices I heard, the culture that of my own childhood.

"I wondered if such a regionally-inflected, personal work would find a performance, and was delighted when Dr. William Cutter, offered to perform the work with MIT's Chamber Chorus. The premier took place on April 29, 2005 in Kresge Auditorium.

"In this setting of 'Penny Ballad of Elvious Ricks' various musical materials evoke the poem’s time and place. The 'cloudy' tonal harmony and the often-pentatonic shapes of the melodies recall folk and early country music traditions. There is a rustic waltz, and reference is continually made to the Protestant hymn tradition. I am deeply grateful to the poet’s wife, Ann Viliet for granting permission to set this work to music, and the score bears a dedicatory inscription to her."