"MIT is deeply committed to the premise that undergraduates
should inhabit a very special world—that of a moral and intellectual
universe with certain fixed stars, but also with wide spaces in between
where students can find room to wander and to make their own paths."

Professor Margaret MacVicar (1944–1991) was a physicist and outstanding educator who founded MIT's widely emulated Undergraduate Research Opportunities Program (UROP), and served as MIT's first Dean for Undergraduate Education. MacVicar received her undergraduate and graduate degrees at MIT and joined the faculty, giving her the distinction of being a "MIT lifer."

She was nationally recognized for her leadership in shaping policies for undergraduate education and for education in public schools. The MacVicar Faculty Fellowship program was established in her memory and has become one of MIT’s highest teaching honors.

In this video, produced by Jay Collier, members of the MIT community remember Professor MacVicar and her enduring contributions to the Institute. 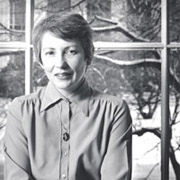