A master shares his creative methods with MIT students.

Versatile in every form of theatre craft, Robert Lepage is equally talented as a director, playwright, actor and film director. His creative and original approach to theatre, which incorporates new technologies, has won him international acclaim. Lepage is currently directing Der Ring des Nibelungen at the Metropolitan Opera in New York. He has created two Cirque du Soleil productions and The Image Mill™  — a spectacular architectural illumination and urban projection.

The McDermott Award celebrates innovative talents in all arts disciplines and is one of the most generous cultural honors in the U.S. 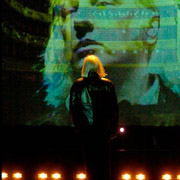