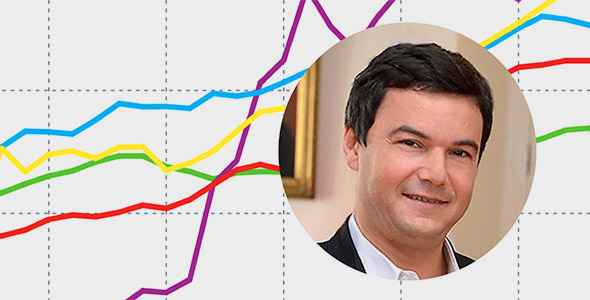 "The main risk with growing inequality is the rise of identity-based politics. If we cannot build coalitions between groups with different origins and backgrounds in order to reduce inequality, then there will always be politicians trying to exploit the frustration and build up the politics of hatred. This is what we saw a century ago, and this is what we are beginning to see today."

French economist Thomas Piketty, author of the international best-seller Capital in the Twenty-First Century, was recently at MIT for "Waves of Globalization," the 2018 World Economic History Congress. A professor at the School for Advanced Studies in the Social Sciences (EHESS), at the Paris School of Economics, and at the London School of Economics, Piketty joined some 1,500 economic, business, and social historians from around the world at the congress, a triennial convening of the International Economic History Association. Piketty presented his keynote talk, “Rising Inequality and the Changing Structure of Political Conflict,” on Tuesday, July 31.

An expert on wealth and income equality, Piketty has argued that inequality is an inevitable outgrowth of capitalism and that government intervention is necessary to provide a leveling influence and prevent democratic systems from breaking down. The author of numerous journal articles and a dozen books, Piketty was an assistant professor in MIT’s Department of Economics from 1993 to 1995, and returned to MIT for a stint as a visiting professor in 2000–2001.

During the conference, Piketty discussed global economic trends with the communications team in the Dean's Office of MIT's School of Humanities, Arts, and Social Sciences.

Q: Why is globalization an important topic for economic historians to discuss at this moment in time?

A: Globalization today is at a crossroad. It is confronted with major challenges, including rising inequality and global warming. At the same time there is a lot of skepticism about what governments can do to regulate global capitalism. Looking back at previous globalization episodes is critical, first to clarify the specificities of our time. There are many common points between the 1870–1914 and 1980–2018, but there are also important differences. Today's globalization has reached a level of financial interpenetration that is unprecedented in history.

One century ago, globalization ended with world wars and Nazism. One positive lesson from history is that governments were able after the 1914–1945 shocks to invent new policy tools — like the welfare state and progressive taxation of income — which were viewed as unrealistic by the economic and political elite prior to 1914. Today we also need to invent new tools — such as global financial transparency and progressive taxation of wealth — hopefully without going through the same traumatic shocks.


Q: Your research has demonstrated that economic inequality is rising rapidly, even in democratic countries. What do you think are the most significant impacts of this trend on political systems worldwide?

A: The main risk with growing inequality is the rise of identity-based politics. If we cannot build coalitions between groups with different origins and backgrounds in order to reduce inequality, then there will always be politicians trying to exploit the frustration and build up the politics of hatred. This is what we saw a century ago, and this is what we are beginning to see today.

Q: What strategies, insights, and tools from the fields of economics and economic history do you consider the most promising for addressing this global challenge?

A: We need to build new alliances between economics and history. Many historians have abandoned the study of economic and social issues and focus solely on cultural and political history. On the other side, economists tend to have an excessively technical and mechanical approach to history, which they often treat as a playground to demonstrate their econometric skills. I think it is possible and necessary to combine the different approaches.