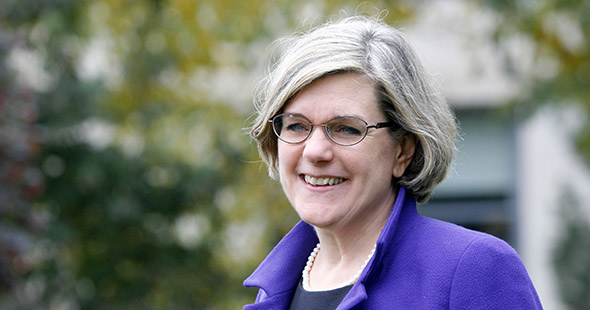 “Nancy is not only a distinguished scholar, but also an accomplished public servant, having served in the US Department of Justice for two and a half years. She brings an especially valuable set of skills to this leadership position."

Nancy L. Rose, the Charles P. Kindleberger Professor of Applied Economics and a MacVicar Faculty Fellow, is the new head of the Department of Economics, succeeding Glenn Ellison, the Gregory K. Palm Professor of Economics.

“Nancy is not only a distinguished scholar, but also an accomplished public servant, having served in the US Department of Justice for two and a half years,” said Melissa Nobles, Kenan Sahin Dean of the MIT School of Humanities, Arts, and Social Sciences. “She brings an especially valuable set of skills to this leadership position and I’m excited to collaborate with her on behalf of our superb Economics department and to plan directions for the School as a whole.”

Expertise in industrial organization and the economics of regulation

Rose is an expert on industrial organization and the economics of regulation. She has made important contributions to the analysis of firm behavior in a wide range of industries, including airlines, electric utilities, and trucking. These interests have complemented a number of MIT-wide initiatives; she has participated in the Center for Energy and Environmental Policy Research, the Future of the Electric Grid study, and the Global Airlines Initiative. She has also served on the board of directors of the Whitehead Institute. Rose has been an Alfred P. Sloan Fellow, a fellow at the Center for Advanced Study in Behavioral Sciences, and a Guggenheim Fellow.

In 2014, Rose was invited to join the US Department of Justice (DOJ) as the Deputy Assistant Attorney General for Economic Analysis in the Antitrust Division, directing a team of more than fifty PhD economists in the analysis of prospective mergers and other issues of competition policy. She returned to MIT in January 2017, teaching both undergraduate and graduate courses last spring.

“Working at DOJ provided a terrific opportunity to influence outcomes on questions that are closely related to my research and teaching," Rose said, "It was also an introduction to managing an organization — which I hope will be helpful as I learn the ropes as department head.”

Rose has also played important leadership roles in her field. She was elected vice president of the American Economic Association in 2012, and served as a board member for the Committee on the Status of Women in the Economics Profession. She served for 24 years as the inaugural director of the Industrial Organization Program at the National Bureau of Economic Research, a Cambridge-based research organization with more than 1,500 affiliated academic economists.

Bengt Holmström, the Paul A. Samuelson Professor of Economics and Nobel laureate, who served as department head for economics between 2003 and 2006, commented that “Nancy brings a wealth of talent and experience to this role, and has the universal respect of her colleagues. She understands our department’s culture and will be an excellent leader.”

Rose is the second woman to lead MIT’s economics department. The first, Ann Fetter Friedlaender (PhD’64), who became department head in 1983, was also the first woman to lead an academic department at MIT. Rose is married to fellow economist and MIT faculty member James Poterba, who served as department head more than a decade ago. They have three grown children: an investment analyst, a software engineer, and a middle school science teacher. Two of the three were college economics majors.

MIT News: Professor Rose to serve at Department of Justice