MIT's Abdul Latif Jameel Poverty Action Lab, which uses scientific methods to assess the effectiveness of poverty relief and development programs, has been given a major new international award in recognition of its contributions and innovations.

The BBVA Foundation Frontiers of Knowledge Awards seek to recognize and encourage world-class research and artistic creation by awarding 3.2 million euros (about $4 million) in eight categories such as basic science, climate change, arts and biomedicine.

J-PAL, established five years ago in MIT's Department of Economics, won the category of "development cooperation," which honors research endeavors and practical actions in the fight against poverty and exclusion. The BBVA jury cited J-PAL's impact on the field of development and in generating knowledge of how to address poverty. The award comes with a cash prize of 400,000 euros (about $515,000).

"We are all very excited about the announcement and the recognition it gives to the work of the entire J-PAL network," said J-PAL co-director and co-founder Esther Duflo, MIT economics professor. "This is a major award, both for its scale and in terms of academic excellence. It will contribute considerably to our capacity to influence policies, change lives and to continue to expand our evidence base."

J-PAL is run by Duflo, the Abdul Latif Jameel Professor of Poverty Alleviation and Development; Abhijit Banerjee, the Ford Foundation International Professor of Economics; and Rachel Glennerster, executive director of the lab. The lab promotes the use of randomized trial methods, similar to methods used to test experimental drugs and vaccines, to evaluate development interventions in areas of education, health, women's empowerment and rural development. For example, J-PAL has measured the effectiveness of bed net campaigns in combating malaria and strategies to reduce teacher absenteeism.

The BBVA jury, chaired by the director of the Economic Growth Center at Yale, Mark R. Rosenzweig, said J-PAL's methodology has been "extended to policy questions where nobody had previously thought to use it and, in some cases, has led to important policy actions."

Some donors and foundations are starting to ask for rigorous evidence from their grantees, Duflo said. "We hope that this prize will further encourage this movement, both among researchers and organizations. We also hope that it will encourage organizations and governments to use the results of such projects to help their choice of what to fund, so that successful programs can be scaled up."

The annual Frontiers of Knowledge Awards are determined in collaboration with the Spanish Council for Scientific Research. The first recipient in the inaugural edition of the awards was announced earlier this month in the "climate change" category; the honor went to U.S. researcher Wallace S. Broecker. The last six recipients will be announced later this month; the awards will be presented in a formal ceremony in spring. 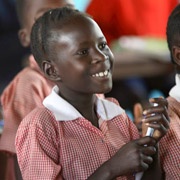