It's unusual for philosophers to publish many books these days, which is why the publication of eight books by eight of the 12 MIT philosophy faculty in the span of a year marks a noteworthy chapter for the Institute's philosophy section.

"Philosophers, especially analytic philosophers, tend to publish articles rather than books," says Richard Holton, professor and head of the philosophy section in the Department of Linguistics and Philosophy. So, he says, it is very unusual to have so many philosophy books—both published and upcoming—from MIT at one time.

The themes of the eight books differ widely—ranging from the philosophy of Fellini to free will to the epistemology of pornography—but "they are all careful, analytic works," says Holton. "In that sense they are all very much MIT products, and they have all benefited from much discussion in the department here. They show how very diverse topics can benefit from what is recognizably the same approach. It is a feature of philosophy that, unlike most disciplines nowadays, we remain generalists."

Holton cautions against reading too much into the timing: "I wish there were some intriguing explanation, but I think it's basically coincidence."  Holton's own book, "Willing, Wanting, Waiting," will be published in July by the Oxford University Press. The other books by philosophy faculty are:

On Myself and Other Less Important Subjects
Caspar Hare (Princeton University Press, September 2009) 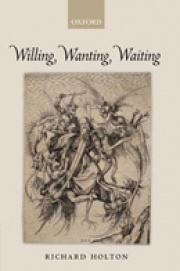