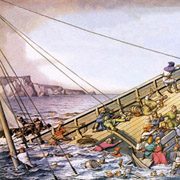 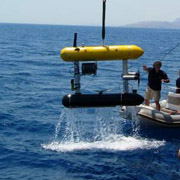 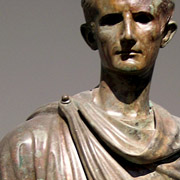 Excerpt from The Economist article
December 17, 2009

"A SHIPWRECK is a catastrophe for those involved, but for historians and archaeologists of future generations it is an opportunity. Wrecks offer glimpses not only of the nautical technology of the past but also of its economy, trade, culture and, sometimes, its warfare. Until recently, though, most of the 3m ships estimated to be lying on the seabed have been out of reach....Modern robotics, however, is changing this. A new generation of free-swimming, automatic underwater vehicles (AUVs) is being developed....One of the leading practitioners of the AUV approach to marine archaeology is Brendan Foley, of the Woods Hole Oceanographic Institution, in Massachusetts."

Read the full article at The Economist. 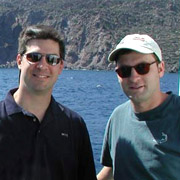 
About Brendan Foley
Brendan Foley is a 2003 Ph.D graduate of the School's Program in Science, Technology, and Society (STS), where he worked closely with David Mindell, Dibner Professor of the History of Engineering and Manufacturing, Professor of Engineering Systems, and Director of STS. Together, Foley and Mindell founded MIT's DeepArch research group, and laid some of the intellectual, methodological and technical foundations for archaeology in the deep sea.

For the past 20 years, Foley has participated in archaeological and oceanographic expeditions using scuba, human-occupied vehicles, remotely operated vehicles, and autonomous underwater vehicles. He serves as a scientist and research associate in the Deep Submergence Laboratory, at the Woods Hole Oceanographic Institution, where he develops advanced methods for precise, accurate characterization of deep sea-floor features, particularly ancient shipwrecks. He is also a Visiting Scholar in the School's Program in Science, Technology and Society.

His ultimate research goal is to understand the transition to civilized, urban living in the Mediterranean Bronze Age (3000 to 1000 BC), based on investigation of pre- and proto-historic enabling technologies—such as metallurgy, seagoing ships, specialized cargo containers such as amphoras, and production and accounting technologies, including written language.

A Philosophy for Archaeology in the Deep Sea
"Data from high definition camera systems, acoustic sensors, and chemical detectors can deliver answers to many first-order archaeological questions."
Brendan Foley 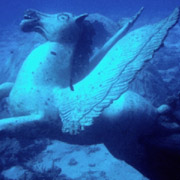 To learn more about the field, visit:

The Undersea World of David Mindell
Story at The Boston Globe

An Acoustic Tape Measure
Story from The New York Times 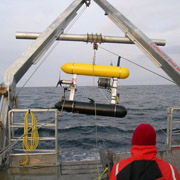