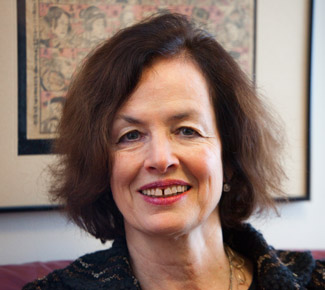 "Every successful project and institution
requires such a visionary. She has been ours.”

Patricia Gercik, Associate Director of the MIT International Science and Technology Initiatives (MISTI) and Managing Director of the MIT-Japan Program, has received an MIT Excellence Award in the category of “Bringing Out the Best: Everyday Leadership throughout MIT.”  The MIT Excellence Award is among the highest honors presented to MIT staff in recognition of their work.

A Large Portfolio
As Associate Director of MISTI, Gercik supervises the high functioning work of ten different country program managers. As Managing Director of the MIT-Japan Program, Gercik teaches students about Japan, supervises their placement in Japanese internships, cultivates relationships with firms and institutions on both sides of the Pacific, raises funds, and manages relationships with the Japanese community.

Gercik joined MIT more than 25 years ago to help develop what was then a fledgling program in Japanese studies at MIT. That program—now known as MIT-Japan—marks the genesis of applied international studies at MIT and is a cornerstone of the ten (and growing) country programs of MISTI. MISTI is today the nation’s largest and most successful programs of applied international studies.


Vision, Dedication, and Compassion
Reflecting on Gercik's extraordinary contributions, Richard Samuels, Ford International Professor of Political Science, Director of the Center for International Studies, and Founding Director of the MIT-Japan Program, says "Pat is a successful fundraiser in the corporate world; a dedicated mentor to students and staff; and an imaginative architect for each next phase of program development."

He adds, "Every successful project and institution requires such a visionary. She has been ours.”

Suzanne Berger, Raphael Dorman and Helen Starbuck Professor of Political Science and director of MISTI, says “Pat has a great capacity to bring intuition together with sharp observation and analysis in problem solving. I have never met anyone with the same combination of realism and toughness in judgment together with kindness and compassion in approach.”

National Leadership
Gercik’s reach extends far beyond MIT. She has been a national leader in coordinating efforts on campuses form Massachusetts to California to stimulate more and better understanding about Japan and international studies. She has been the interface between MISTI and the US government, from the National Science Foundation to the Pentagon. To that end, she authored a book, On Track with the Japanese, which has become required reading for the executives of many firms.

Childhood in Japan
Born to a British mother and a Russian father who relocated to Kobe, Japan, in the 1930s, Gercik lived a Japanese childhood. She has vivid memories of “confronting” U.S. soldiers during the Occupation and wandering through the black markets of a reconstructing Tokyo; she recently wrote a novel about this experience.

“Then, as now," says Samuels, "Pat had a remarkable sense of how to understand human behavior—and how to explain it in ways that de-mystify."

About the MIT Excellence Award

Awards are given to teams and individuals in one of six categories. Individuals receive $2,000. Teams share a maximum of $10,000, with a cap of $2,000 per individual on the team. The awards will be presented at a community-wide celebration on Wednesday, March 3, 2010, at Kresge Auditorium.