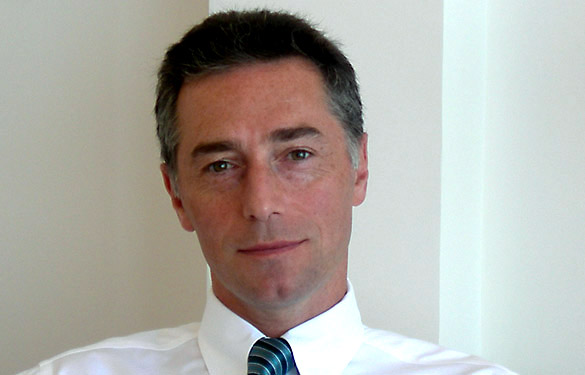 Dedicated throughout his career to social justice, Locke
has a history of finding new ways to confront big issues.
"The School's Political Science Department is one of the country’s
best,” says Locke, who got his PhD there, and now hopes to help
the department work together as a community—and with others
around the Institute—to take on the world's most challenging issues.

A mission to address the world's great challenges
Professor Richard Locke is on a mission as the new head of the Political Science Department — MIT’s mission: to bring knowledge to bear on the world’s great challenges.

“I believe every single one of the units of MIT should be reinforcing that mission,” says Locke, whose appointment took effect July 1. “What, therefore, can Political Science do to tackle and address the world’s great challenges?”

Commenting on Locke's new role at Political Science, Dean Deborah Fitzgerald said, “Rick Locke is an exceptional thinker and leader, just the kind of person to ensure the continued excellence of MIT’s Political Science department. Rick has very forward-looking ambitions for the department, and high expectations. He knows what a great department this is, and can see how it can be even better. He believes in making an impact, both here at MIT and in the world. I have every confidence that he will succeed.”

Sustainability is transformative
Dedicated throughout his career to social justice, Locke has a history of finding new ways to confront big issues. In his role as a professor of management at the Sloan School, he helped launch Sloan’s Laboratory for Sustainable Business, an internship-based course that introduces students to sustainability issues and ways to better align business practices with the planetary ecosystem. “The issue of sustainability is a really big challenge, and it will change the way business is done,” says Locke.


Awards for innovation
Locke was awarded the MIT Class of 1960 Teaching Innovation Award in 2007 and the Jamieson Prize for Excellence in Teaching in 2008, largely for his work creating the Global Entrepreneurship Laboratory (G-Lab) a course that teaches students about entrepreneurship in the global economy.

About the G-Lab concept, Locke says, “Traditionally, entrepreneurship courses would present 'recipes' to their students, arguing that to develop a vibrant, entrepreneurial economy, one required a short-list of (American-style) institutions (i.e. capital markets, corporate governance mechanisms, common-law legal system, flexible labor markets, etc.).  When Simon Johnson and I started G-Lab, it was because we were struck by the wealth of entrepreneurial clusters and vibrancy throughout the world, including in several countries that possessed few, if any, of these US-styled institutions. We believed that by studying these non-US experiences, we could teach our students not only about entrepreneurship but also about being an entrepreneur in a global economy. Also, by mixing classroom teaching with hands-on, practical experience working with a real entrepreneurial firm somewhere outside of the US, our students would learn in a unique and especially productive way.”

Creating synergies to address big challenges
Having engaged with key problems while at Sloan, Locke says he’s eager to collaborate with his colleagues in the School of Humanities, Arts, and Social Sciences.

“Because I care about what political science does in the world, I thought that becoming Head of the department would be a very interesting challenge. I am especially eager to mobilize colleagues around research and teaching that addresses some of the world’s great challenges,” he says.

“In fact, within Political Science, we are already doing research on policies and politics on some of these issues, like improving security and peace in high-conflict regions, ensuring fair elections and greater citizen participation in democracies, promoting economic development and social welfare, and in providing public goods to everyday citizens in both rich and poor countries. These are just some of the issues my colleagues in Political Science are already working on. I would like us to connect more strongly with other parts of the Institute that care about and are working on these and similar issues.”

Locke now hopes to help the department work together as a community—and with others around the Institute—to take on even broader concerns. “One of the things I bring to this job is that I worked in another unit and understand another part of MIT. So, I see tremendous synergies between what’s going on in Political Science and what I understand to be happening in other academic areas, like Economics, Sloan, Anthropology, Urban Studies and Planning, as well as initiatives like the Poverty Action Lab, the MIT Energy Initiative, and the Earth Systems Initiative, etc.”


Building a better world
Locke even hopes to create an S-Lab type of experience for political science students. “I’ve been toying with the idea of starting a new undergraduate course, perhaps called ‘Building a Better World,’” he says, explaining that the course would introduce students to major world problems and reveal what political science has to say about the issues involved.

Locke is also working on a book tentatively titled Justice Beyond Compliance, which bring together research he’s done over the years on how to promote labor standards in global supply chains.


Dedication to fairness and justice
“I was lucky. I could have had different opportunities,” Locke says, reflecting for a moment on what inspired his career focus. Locke was the first person in his family to graduate from a full-time college—and that, he says, has made him appreciate the opportunities he has had.

“Other people, for no reason of their own making, are less fortunate. That’s why I focus on what we can do to ensure that all people, whatever their origins, family background, etc., are treated justly, are given the same opportunities we sometimes take for granted here in the US.” •