Maier's Ratification delivers new knowledge about the adoption
of the U.S. Constitution —

the story of the most consequential political debate in American history 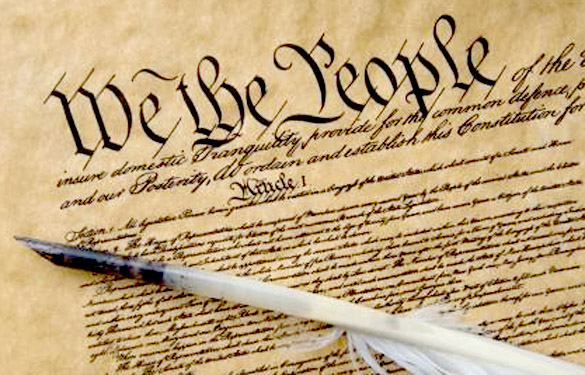 "A magnificent, comprehensive account...Maier's book will stand as the definitive account of the story of the ratification of the Constitution for decades to come." 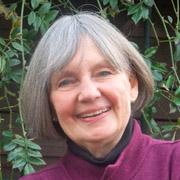 Story: A hardy Constitution
By Peter Dizikes at MIT News

Transformative | The Washington Post
Pauline Maier, the William R. Kenan, Jr., Professor of American History at M.I.T. and one of the nation's foremost scholars of the American Revolution, explores how the process of ratification worked in each of the 13 states. In doing so, she transforms our understanding of what representative government itself means.
Review at the Washington Post

"An ur-text of American politics" | New York Times Book Review
"On Sept. 17, 1787, the convention that had been sitting in Philadelphia for four months to design a new form of government for the United States adjourned, offering its handiwork to the nation. Almost a year later, on Sept. 13, 1788, Congress declared that the Constitution had been duly ratified, and prescribed the rules for the first presidential election the following year. Pauline Maier’s delightful and engrossing book shows how America got from the first date to the second — and ultimately to today, since we still live with the same document, however modified.

..Ratification is an ur-text of the Almanac of American Politics. It has process, issues, arguments, local context, major players, minor players — and hoopla. 'The popular excitement' that attended the struggle, Maier writes, 'reminded me at times of Americans’ obsession with the final games of the World Series, but with greater intensity because everyone understood that the results would last far longer than a season. . . . Politics was in a real sense the first national game.'"
Full review at the New York Times Book Review

A Top Ten Book of 2010 | Wall Street Journal
"Pauline Maier's Ratification is the "first comprehensive account of the debates in the 13 states over the adoption of the Constitution"... Ratification, for all its scope and technical detail, is a gripping and eye-opening read.  Ms. Maier is a member of that rare breed of historians who write vividly and with a flair for depicting dramatic events."
Full review by Michael McConnell at the Wall Street Journal | Top Ten at WSJ

Definitive
"Pauline Maier has written a magnificent, comprehensive account of the political contests by which the people of America, in James Madison's words, breathed 'life and validity' into the United States Constitution. Her book will stand as the definitive account of the story of the ratification of the Constitution for many decades to come."  — Richard R. Beeman, professor of history, University of Pennsylvania, and author of Plain, Honest Men: The Making of the American Constitution


One of the ten best books of the year | Esquire
Her genius is putting the politics back into one of the great political brawls of all time. The Constitution was not ratified because a whole lot of important people got together and thought Big Ideas at the same time. It was ratified because, in some strange way, all of the petty and provincial grievances in every state were somehow brought into harmony for the purposes of creating a country.The people who debated, fought, and ultimately passed the Constitution "refused to be told that the issues of the day were beyond their competence," writes Maier. That is the undying article of faith that we all ought to embrace.
Full review at Esquire

Examines the beginning of American national politics | Bloomberg
"For two years, in 1787 and 1788, Americans argued over the nature of democracy, the structure of government, the relative power and prerogatives of the three branches, the relationship between federal and state powers. No more important questions have ever been taken up by the American people — everything else, including the Bill of Rights, flowed from this battle — and yet we know almost nothing about these debates. Pauline Maier, a professor at the Massachusetts Institute of Technology and one of the most thoughtful historians of the colonial period, has filled this gap with Ratification: The People Debate the Constitution. This book is a stunning examination of what Maier calls “the beginning of American national politics”—the debate that explains the way we Americans govern ourselves, resolve disputes, conduct diplomacy, choose leaders and protect our freedoms.
Full review at Bloomberg


Masterful | Publishers Weekly
This book about one of the most momentous occasions in the nation's history is the definitive one. Maier, a distinguished MIT historian of the Revolutionary era, relates with more authority and in more detail than ever before the long, uncertain course from the Constitution's adoption by the Constitutional Convention in 1787 until its ratification by the states in 1788 and of the Bill of Rights soon after... While the nation's early greats—Washington, Madison, Patrick Henry—get their due, many lesser-known figures, often simple men who shone for this moment alone, play their parts. Maier shows how the Constitution's supporters and defenders won through ratification and why in the end even most of its detractors, in the words of one, concluded that this was "the best government in the world." For those who seek judicious assessment, sober reflection, and masterful analysis of the debates that secured the Constitution, this book is an unsurpassable achievement.


Style, wit, mastery
The ratification of the Constitution was the most comprehensive and consequential political debate in American history. It is quite amazing that the story has never before been told with the knowledge and flair it deserves.  Here Pauline Maier, one of the leading historians of the revolutionary era, at the peak of her powers, tells that story with style, wit, and incomparable mastery of the sources." — Joseph Ellis, author of First Family: Abigail and John Adams

Sweeping
The adoption of the Constitution in 1787-1788 was the first great stroke of popular democracy in America, and perhaps its most successful and momentous as well. Yet surprisingly, the full story of ratification has never been told. Now, at long last, Pauline Maier's sweeping account of ratification brilliantly describes how this great event took place." — Jack N. Rakove, author of Original Meanings: Politics and Ideas in the Making of the Constitution


Scrupulously even-handed | Kirkus Review
After meeting throughout the stifling of 1787 summer for the express purpose of recommending changes to the Articles of Confederation, delegates emerged from their secret deliberations in Philadelphia with a startling new proposal for a more energetic federal government. To take effect, the Constitution would require approval from at least nine of the 13 states.

The ensuing national debate revisited virtually all the contentious issues that had roiled the Constitutional Convention, only this time the arguments were public and even more politically charged. Today, our reverence for the Constitution obscures the passionate battle over its approval by 18th-century Americans. Relying heavily on the massive documentary record of the ratifying conventions compiled by the Wisconsin Historical Society, Maier revives those intense emotions, demonstrating how the arguments were shaped by each state’s peculiar history and by the leading participants in the debate.

The author also shows how the outcome in each state—with particular attention paid to the crucial conventions in Massachusetts, Virginia and New York—affected the terms of the argument as the process unfolded. Notwithstanding eventual unanimity, the debate was close-run, despite the many advantages held by Federalist supporters. They controlled the majority of newspapers and dominated the professional and commercial classes most desirous of a strong national authority, and they often resorted to steamrolling opponents, obscuring nuanced objections to the Constitution and painting adversaries—these “Antifederalists,” a term to which Maier objects—as dangerous anarchists.

Most of all, the Federalists had the imprimatur of George Washington, the new nation’s most unifying figure. The author orders her wide-ranging, complex narrative by frequently checking in with Washington, charting the progress of the ratifying conventions through the missives and messengers to and from Mount Vernon. — Kirkus Reviews 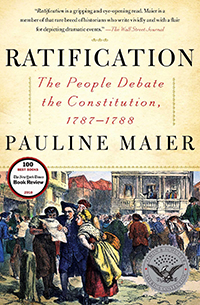 Story: A hardy Constitution
By Peter Dizikes at MIT News