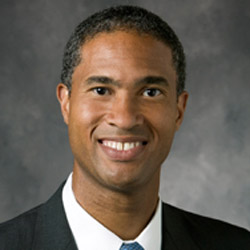 Effective January 15, 2010, Peter Blair Henry — who had served as the Konosuke Matsushita Professor of Economics at Stanford University — became dean of NYU’s Leonard N. Stern School of Business. Henry, who received his Ph.D. in Economics from MIT in 1997, is a Rhodes Scholar, the leader of the Obama Transition Team’s review of the International Monetary Fund, World Bank, and other international lending agencies; and an economic advisor to governments from the Caribbean to Africa. Dean Henry’s scholarship focuses on the impact of economic reform on emerging economies.

NYU President John Sexton said, “After some time, one can read the ‘body language’ of a dean’s search committee. Seldom—if ever—have I seen greater certainty or more enthusiasm for a candidate for a deanship. And when I met with him, it was immediately apparent why: a superb and highly productive economics scholar, a natural leader, a community-builder, and a manifestly good person, Peter Blair Henry has just the attributes to lead NYU’s business school."