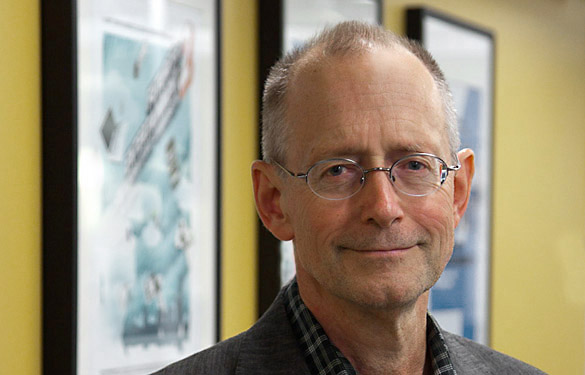 The phenomenon of science and technology influencing
the broader culture continues...as today’s culture is being
transformed by digital media such as social networking
and virtual reality. "These are game changers," says Paradis,
"changing the way people live."

“CMS is an exciting area. It combines many of my interests because it examines forces that are forming the broad culture of now,” says Paradis, who led Writing and Humanistic Studies for 13 years before accepting his new appointment July 1. “Given my interest in culture, comparative media studies is a direct fit.”

A first-rate scholar and wise counsel
Of Paradis, Dean Deborah Fitzgerald said, “Jim is a first-rate scholar, a crack administrator, and a splendid identifier of emerging trends and new directions in humanities scholarship and activity. For many years he has been cultivating new faculty who are on the cutting edge of their fields in writing and media. He will be an excellent Interim Head and wise counsel to students and colleagues alike.”

Paradis’ research interests center on the impact of science and technology on mainstream culture. “As the sciences gave rise to professionalism in the nineteenth century, that created a gap between those with specialized knowledge and others in the culture,” he says. “My focus is how science and technology emerged as major factors in culture.”

Impact of science and technology on culture
Paradis has explored these ideas in numerous books, articles, and edited collections over the years, including T.H. Huxley: Man’s Place in Nature; Evolution and Ethics (with G. Williams); and Samuel Butler: Victorian against the Grain: A Critical Overview. His latest book project centers on science as a cultural authority. “It’s going to be a study of the way in which the various fields of expertise forming in the nineteenth century became central to the ways people thought about culture,” he says.

In the nineteenth century, scientific expertise was becoming the province of the few, but scientific topics were gaining broad currency. For example, Paradis observes that it was at this time that psychology became a more empirical field, and people began to think of science as an authority on questions of the mind. The concept of evolution spurred similarly transformative thinking, he says, as people began to consider what data might reveal about the human condition.

Game-changers
This phenomenon of science and technology influencing the broader culture has continued into the present, Paradis says, as today’s culture is being transformed by digital media such as social networking and virtual reality.

“These are game changers—changing the way people live,” says Paradis, noting that cancer patients can now find each other through online support groups, and millions spend their free time exploring virtual environments in games such as World of Warcraft. “I think media are profoundly changing the way we view ourselves.”

Initiatives
CMS brings a variety of perspectives to the study of media. Research initiatives include the Center for Future of Civic Media (jointly with the Media Lab), which studies new forms of journalism and social media; the Singapore-MIT GAMBIT Game Lab, which examines new directions for video game research and development; the Convergence Culture Consortium, which seeks new ways to relate to consumers and manage brands; the Education Arcade, which investigates the use of games in education; and HyperStudio, which develops media ideas for humanities studies.

Thinking about now — and the future
“Media studies makes tremendous sense at MIT’s School of Humanities, Arts, and Social Sciences because it’s about the cultural formation of media, and the ways these underlying technologies are effecting new communications,” Paradis says.

“It’s kind of messy because [CMS] doesn’t always have the advantage of only peering into the past. It’s also about the present and future,” he says. “That’s why it’s exciting to students ... it gets them thinking about the culture that they’re actually living in now and where it may be heading.” •