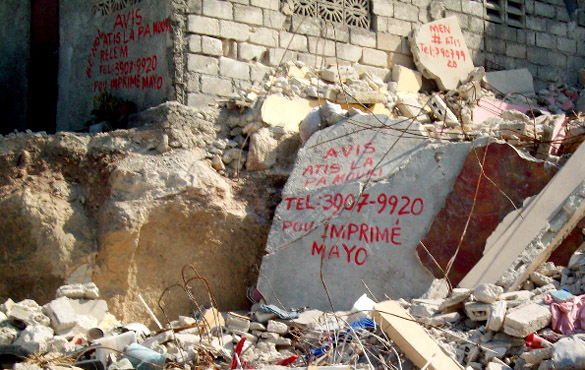 Photograph taken in Haiti on February 22, 2010, by Dr. Evelyne Ancion DeGraff
The words on the rubble read:
Notice: The artist is not dead. Call 3907-9920 for your shirt-printing jobs.

Ideas from MIT scholars with ties to Haiti
Haiti’s troubled past casts a long shadow over its future, according to four MIT scholars—all with strong personal ties to Haiti—who spoke at “Rebuilding Haiti,” a Starr Forum held to explore the future of the country devastated by a January 12 earthquake.

Michel DeGraff, MIT associate professor of linguistics; Erica James, associate professor of anthropology; Cherie Miot Abbanat, lecturer in the Department of Urban Studies and Planning; and Dale Joachim, a visiting scientist at the MIT Media lab—gathered at a February 23 forum sponsored by the School of Humanities, Arts, and Social Sciences’ Center for International Studies.

The four offered insights into areas that need consideration if rebuilding is to be successful:

Rebuild for those who need it most
“When we talk about rebuilding Haiti, we have to remember where we came from,” said Michel DeGraff, a native of Haiti. “If we don’t take that into account, we’re going to rebuild for the 5 percent who’ve always been pretty well off.”

Recognize the unintended consequences of aid
Erica James began by recounting some of Haiti’s recent traumas—from the uprising that ousted Jean-Claude “Baby Doc” Duvalier to the coup that forced out President Jean-Bertrand Aristide to the U.S. intervention that brought Aristide back. “One lesson is that Haiti’s victims are not passive objects of intervention,” she said. “My goal is to shed light on the potential challenges that may emerge as reconstruction begins.”

These include creating unintended classes of victims—the haves and have-nots of aid. “Women are increasingly vulnerable and the number of orphans has increased exponentially. But if these populations are singled out because they are at risk, these groups may be subject to more social stigma,” said James, whose book Democratic Insecurities; Violence, Trauma, and Intervention in Haiti is forthcoming this spring. 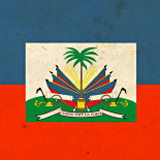 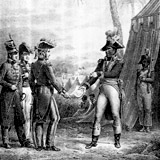 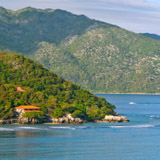 Resources for Rebuilding
Information on organizations, programs, and initiatives
Discover

Remember Haiti's shining beginning
Haiti today is famous for its crushing poverty, but when the nation won independence from France in 1804—after more than a dozen years of revolution—it shone with promise. It was the world’s first black republic, the outgrowth of a triumphant slave rebellion, and, as DeGraff explained, an example of liberty and equality that was profoundly challenging for world leaders of that time. “Declaring all men and women equal was earth-shattering,” he said.

To date, the inspiring promise of the revolution—equality for all—has yet to be fulfilled in Haiti, which remains socially stratified in a way that is reflected in the country’s use of language.


Use Haitian Creole, Haiti's national language, in education
“The fact is only 5 to 10 percent of the population speaks French,” DeGraff says. “At least 9 million people in Haiti speak only Haitian Creole. And yet, the widespread practice is that students are supposed to be taught and tested in French. The vast number of Haitians are second-class citizens as reflected in this language practice.”

Accepting Creole as a legitimate language, and teaching Haitians in that language can help create the educated population Haiti needs to rebuild, DeGraff said. “There’s a tendency to think that what we see in the present has to continue,” but Haiti can be better, he said. “It is possible to educate—and educate well—using Haiti’s national language.”

Plan for energy, communications, and renewing the forests
Joachim’s recipe for rebuilding Haiti centered on energy, the environment, and communications. Here again, history has played its part, as oil and trade embargoes during the early 1990s forced Haitians to turn to their forests for fuel, dangerously destabilizing the environment, Joachim said.

“Energy is at the core of the problems in Haiti in many ways,” Joachim said, and “improving the country’s energy infrastructure and working to create a robust, modern communication system should provide Haiti with the tools to build a brighter future.”


For those who offer aid: find out what is really needed
Abbanat suggested that there may be an opportunity in Haiti’s most recent trauma—if those who come to help can find a way to look “through Haitian eyes” and understand what Haitians really want at this time. Abbanat tapped personal contacts in Haiti to get on-the-ground information about conditions and needs; she then formed an initiative, Hearts and Hands for Haiti, to get supplies to those who need them.


Build on Haitian assets, values, and strengths
The key, all the speakers agreed, is to work toward the future without forgetting Haiti’s past. “We can’t forget what is already in place in Haiti. What’s already working, maybe fragile but still working,” Abbanat said, later noting that the missionary network is one of several that’s functioning well. “Instead of seeing Haiti as weak or as a victim, why not talk about our resilience, our discipline.”

DeGraff agreed. “Grassroots-level groups of Haitians are already doing amazing work building a better Haiti,” he wrote after the forum. “This is the same sort of grassroots groups that were at the roots of the Haitian revolution and at the roots of the political movements that overthrew the Duvalier dictatorship. These groups have been busy building a Haiti that will be better for all.” 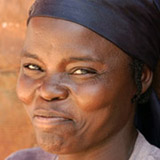