The Bateson Prize honors work that is theoretically rich, ethnographically grounded, and in the spirit of the tradition for which the SCA has been known — interdisciplinary, experimental, and innovative.

Stefan Helmreich's much-admired book,  Anthropological Voyages in chosen from a field of more than 80 entries, as the recipient of the 2010 Gregory Bateson Book Prize, awarded by the Society of Cultural Anthropology (SCA).

One of anthropology’s most distinguished experimental thinkers, Gregory Bateson (1904-1980) and his diverse body of work have long been emblematic of what the SCA, now one of the largest sections of the American Anthropological Association, was founded to promote rich ethnographic analysis that engages the most current thinking across the arts and sciences.

Welcoming a wide range of styles and argument, the Bateson Prize honors work that is theoretically rich, ethnographically grounded, and in the spirit of the tradition for which the SCA has been known — interdisciplinary, experimental, and innovative. This year's jury found that Helmreich's Alien Ocean combines all of those qualities. 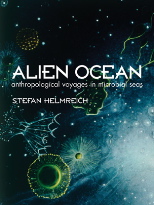 When Stefan Helmreich set out to examine the world of marine microbiologists for a new book, his research took an unexpected twist. Helmreich, who has been recognized for his innovative cultural anthropology work, had decided to study scientists who chase some of the world's smallest creatures in some of the world's most forbidding places. So he spent long hours interviewing microbial biologists. But during the years of Helmreich's research, the entire field shifted gears.

Alien Ocean immerses readers in worlds being newly explored by marine biologists, worlds usually out of sight and reach: the deep sea, the microscopic realm, and oceans beyond national boundaries. Working alongside scientists at sea and in labs in Monterey Bay, Hawai'i, the Woods Hole Oceanographic Institution, and the Sargasso Sea and at undersea volcanoes in the eastern Pacific, Helmreich charts how revolutions in genomics, bioinformatics, and remote sensing have pressed marine biologists to see the sea as animated by its smallest inhabitants: marine microbes. Thriving in astonishingly extreme conditions, such microbes have become key figures in scientific and public debates about the origin of life, climate change, biotechnology, and even the possibility of life on other worlds.

About the Bateson Book Prize
Society for Cultural Anthropology