About
The Kendall Band Preservation Society is an MIT music and engineering student organization that was chartered to restore, document, and maintain the Kendall Band, a musical installation/sculpture at the Kendall T stop created by Paul Matisse, grandson of the painter Henri Matisse.

The group plans to fix and restore the sculpture, maintain it for the forseeable future, and document the entire restoration process for future members of the group. After the restoration is completed, the KBPS will inspect the installation periodically to make sure it is working properly and will demonstrate to the public its proper use.

"A Perfect MIT Challenge"
Thanks to an ensemble of MIT students with music and engineering backgrounds, a pianist whose staff job is planning Institute concerts, and a saxophone-playing engineering instructor, “Kendall Band,” the interactive sound sculpture beloved by commuters at the Kendall ‘T’ stop, will play again.

Designed and installed in 1987 by Paul Matisse, grandson of painter Henri Matisse, the three-instrument “Band” hangs between the in- and out-bound tracks in Kendall Station. Individual instruments are named for mathematicians involved in music, and they’re activated by handy trackside levers. “Pythagoras,” a series of cylindrical bells and rubber bell-strikers; “Kepler,” a large steel ring that’s hit by a hammer, and “Galileo,” a steel thunder sheet shaken by ceiling cables, comprise the work.

“Band” fell silent about two years ago as the user-friendly levers wore out. In previous years, Matisse repaired and maintained the popular artwork himself. Now, to his delighted relief, it’s MIT’s turn. 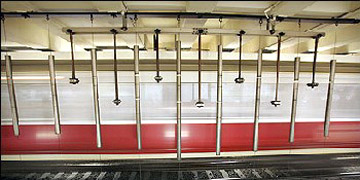 The three instruments in the Kendall Station are named for mathematicians involved in music: “Pythagoras,” a series of cylindrical bells and rubber bell-strikers; “Kepler,” a large steel
ring that’s hit by a hammer, and “Galileo,” a steel sheet shaken by ceiling cables.

Catalyzed by Clarise Snyder, Director of the MIT Concert Office
Clarise Snyder, Concert Director in the School of Humanities, Arts, and Social Sciences made sure of that. A classical pianist who has worked at the School since 1982, Snyder knows the MIT “mind and hand” community. When a visitor to the Kendall ‘T’ stop asked her if the Institute would get involved in the “Band” rehab project, she saw a great opportunity.

Here were the elements of a perfect MIT challenge: each grit- and rust-covered steel piece would have to be removed, with the work to be done late at night and only with special safety training. Second, there are neither drawings nor CAD files: the student musician-engineers would have to invent repair methods themselves, and would have to discern how the “Band” should sound.

Also, “Band” would have to be re-installed, requiring more late-night sessions underground. And the payoff? A trio of working machines, a trio of musical sounds—and the likelihood new and different problems would occur next year! Who could resist? 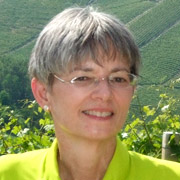 In the complex project to repair a major public artwork— one that involves music, engineering, and a transportation system — Clarise Snyder, Director of the MIT Concert Office, immediately saw the elements of "a perfect MIT challenge."

The generosity of MIT students
Snyder recalls that students "responded excitedly to an email about the “Band” project faster than you can say “a-squared plus b-squared = c-squared."

“I’m always inspired by our MIT students’ fearless ‘can do’ spirit and how generous they are with their precious time,” she says.  The 20-person team is now known as The MIT Kendall Band Preservation Society, a student activity.

Uncharted territory
Luckily for the Kendall Band team, Snyder has her own ‘can do’ spirit. In spring 2010, she planned over 40 student ensemble, solo, and chamber music concerts and at least 10 more by faculty and guest artists. “But the Band project—dealing with the MBTA and their licensing department, the MIT Office of the General Counsel, and the Safety Office—was uncharted territory,” she says.


Tarkanian | musician-engineer
Enter Mike Tarkanian (’00, SM ‘03), leader and musician-engineer. Tarkanian is a technical instructor in materials science and engineering; he signed on to supervise student volunteers and work with MBTA officials to arrange the late-night sessions during which parts of “Band” will be removed.

An accomplished saxophonist and a guitar and banjo player, Tarkanian took numerous classes in the School's Music section, studying composition with Evan Ziporyn; harmony and composition with Elena Ruehr and the music of India with George Ruckert. An MIT-er since 1996, he is the only one of the Preservation team who has heard all of “Kendall Band” instruments. “They’re wonderfully musical,” he says. “The gong is like a church bell, very deep and rich."

The instruments are a nice break for commuters, so it's a public service project. From an engineering perspective, these are simple machines, but Matisse designed and built them in an elegant way. And it’s not every day that you get students involved with hands-on engineering as they dissect the work of a great artist.

Mann | piano and materials science
Maxwell Mann, sophomore in materials science and engineering, is a founding member of the Kendall Band Preservation Society and one of seven students who took the T ‘s one-day safety training course and are now qualified to work on “Band” in the station.

Of the three Kendall instruments, Mann has heard only “Pythagoras,” the row of cylindrical steel bells struck by rubber-ended hammers.

With a background in classical piano and materials science, he was inspired to work on the project, he says, by the creative challenge of repairing and rebuilding musical sculptures. He also enjoys “overcoming mechanical instability through our appreciation of music and our knowledge of engineering.

Hudson | tenor sax and engineering
Shaymus Hudson, sophomore in materials science and engineering, plays tenor sax for the MIT Marching Band. He has heard only the “Pythagoras’” bells and would “really love to hear the ring gong (Kepler) piece,” he says.

Like Mann, Hudson is qualified to remove the sculptures from Kendall station; he also intends to work on repairing them.

"I joined the Preservation Society because so many T riders wanted it fixed, and now we could do it. When we were removing mechanisms on our first night, we got many, many ‘thank you’s’ from riders at the platform. They thought it was wonderful the Kendall Band would finally be fixed by the best engineering students in the country!

Smith | a cappella and electrical engineering
Senior Quentin Smith, an EECS major who was a member of Techiya, MIT’s a cappella group, has never heard a peep from the “Kendall Band” instruments. Yet he, too, was inspired by the musical artwork and by the engineering challenge; he completed the MBTA safety training and is already working nights in the station.

Grace notes from underground
By day, Tarkanian serves as tour guide on the “Band” project. Shepherding visitors through the busy Kendall stop, he shouts out his group’s plans over the shrieks of trains grinding towards Park Street or Harvard Square. “WE TOOK DOWN ALL THE HANDLES,” he yells, gesturing up and down both sides of the track.


Galileo, Kepler, Pythagoras
When the handles work on “Galileo,” the thunder sheet named for the physicist, they tighten and loosen the cables so the sheet vibrates stormily, he explains.

Moving on to “Kepler,” a nod to the astronomer-mathematician, Tarkanian points to notches on the large steel “O.” In a lull between trains, he says, “Those slits on the band stop those parts of the ring from vibrating. They take out the overtones. It’s AMAZING HOW MUSICAL THIS IS!

He proceeds next to “Pythagoras,” named in honor of the Greek mathematician famous for his theorem (“a-squared,” etc.) and for translating musical notes into math. Closest to the inbound-side entrance, “Pythagoras” is a huge hit with small children, and Cambridge pre-schools have long used the instruments as a rainy-day field trip destination—one reason, perhaps, that the lever wearied.

Yet this is a very grown-up toy, too, with fans eager for its return to Kendall. Their “Thank you!” and “Hurry!” messages are scrawled on the poster announcing repairs are underway.

Thanks from the artist
Matisse, based in Groton, Mass., has collected many such notes of gratitude and encouragement for his work on “Kendall Band.” He’s passing his own to the MIT team.