American Democracy: Still an Export in Demand?
Pauline Maier on The Takeaway

From The Takeaway
a national morning news program that invites listeners to be part of the American conversation.

"We Americans relish our revolutionary spirit. Our American system of democracy was founded on the cultural belief that we must fight against tyranny. That American-style democracy has served as an example for many emerging nations since the American Revolution. But as we watch revolutions change the sociopolitical landscape of the Middle East, is it fair to ask whether our own system should serve as the best example of a working and efficient system of government? Has our own version of Democracy become so bloated and inefficient that it’s not worthy of being considered exemplary for a newly developing nation? We're joined by Pauline Maier, MIT professor and author of Ratification: The People Debate the Constitution, 1787-1788. 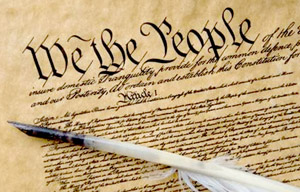 A hardy Constitution
Story by Peter Dizikes at MIT News