The Responsibility of Intellectuals

Noam Chomsky will speak on “The Responsibility of Intellectuals” September 22, 4:30pm-6:00pm, MIT Tang Center, 70 Memorial Drive, Wong Auditorium. Dean Deborah Fitzerald will introduce the event. Other fall events in the series will include, "Just and Sustainable Global Production: What Can Consumers Do?" with Dara O'Rourke (MIT BS 1989) , Richard Locke, and others, tba, November 3, 2011, 4-5:30, Wong Auditorium.

Noam Chomsky will discuss “The Responsibility of Intellectuals,” revisiting the controversial topic he first addressed in 1967. He will also publish a companion essay in the September/October 2011 issue of Boston Review.

The Chomsky event kicks off the second year of the Ideas Matter lecture series, a joint project of Boston Review and the MIT Political Science Department. The last event of 2010—“Government’s Role in the Market” by Eliot Spitzer, introduced by Simon Johnson—completely filled Wong Auditorium and produced a lively Q&A with the audience that was broadcast on CSPAN’s BookTV.

The partnership between Boston Review and MIT Political Science traces back to 1991, when Joshua Cohen—a professor of political science and philosophy from 1977-2006, and chair of political science from 1997-2005—became BR’s editor-in-chief. Cohen credits Chomsky’s work with inspiring his decision, “When I decided to take on the Boston Review in 1991, I was inspired by Chomsky's ideas about the responsibility of intellectuals. I thought that Boston Review could be a place where reasoned argument could be brought to bear on the realities of politics and power, all in service of democracy's promise.”

In the years since, BR has benefited enormously from its close connection to MIT’s remarkable group of political scientists. And the connection with BR has provided MIT faculty with easier access to a national forum for addressing pressing contemporary issues. Over the years, a large number of MIT political scientists, and other members of the MIT community, have appeared in BR—including Steve van Evera, Barry Posen, the late Steve Meyer, Richard Locke, Charles Stewart, Steve Ansolabehere, Mike Piore, Archon Fung, Dan Posner, and, most recently, Edward Steinfeld—writing on issues of U.S. foreign policy, economic development, American elections, the decline of species diversity, China, and other topics.

In September 2010, Boston Review­—now edited by Cohen and Deborah Chasman—returned to MIT at the invitation of current Political Science Department Head Richard Locke. The magazine relaunched in a new full color format, expanding its reach to a broad national audience. That same month, Boston Review and the Department initiated Ideas Matter. The series is modeled on the magazine’s signature feature, the New Democracy Forum. A panel of critics, scholars, and practitioners are invited to MIT to discuss large and deeply contested issues of politics and policy: immigration, technology and global poverty, campaign finance, internet freedom, full employment, and the constitutional debate about marriage.

The Ideas Matter series gives faculty and students the opportunity to engage with an impressive range of thinkers and practitioners, from both inside and outside the MIT community. Introducing a past Ideas Matter event on jobs, Richard Locke said of the collaboration, “We realized the mission of Boston Review and the mission of MIT Political Science were very much aligned in the sense that we both felt there was a lack of space where people could come together to learn about important current issues and then debate those issues in a calm, informed and fact-based way.” Speakers from the series' first year include Nicholas Negroponte, Lawrence Lessig, Andrew Bacevich, Evgeny Morozov, Nancy Cott, Jennifer Hochschild, Joseph Carens, Rachel Glennerster, and Eliot Spitzer. And, through the combined efforts of the Department and BR, it is providing the kind of serious, reasoned public discussion of fundamentals that a healthy democracy requires.

An award-winning year for Boston Review

In the past year, along with the move back to MIT and a relaunch, Boston Review picked up an Utne Independent Press Award for Best Writing. Utne announced, “Let mainstream publications give in to the perceived demand for bite-sized news; Boston Review provides the exquisite main course.”

A forum for ideas

Founded in 1975, Boston Review is a magazine of ideas, independent and nonprofit. It covers lots of ground—politics, poetry, film, fiction, book reviews, and criticism. But a few premises tie it all together: that democracy depends on public discussion; that sometimes understanding means going deep; that vast inequalities are unjust; that human imagination breaks free from neat political categories; and that powerful images are worth piles of words. In print and online, Boston Review reaches 120,000 readers every month. The Boston Review website is also slated for an update in the fall. The new design will help more readers to explore new content as well as navigate through past articles from the expansive archives. 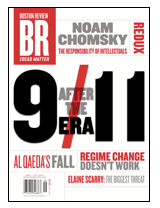