"Provocative and inspirational"
Review of MIT performance by Riley, Ziporyn, and the Gamelan Galak Tika

Harlow Robinson
"Getting the Most out of Minimalism"
Performance by Terry Riley with MIT's Evan Ziporyn and the Gamelan Galak Tika
Review in The Boston Globe | December 17, 2011

"Judging by his masterful contributions on Thursday, at age 75 Riley has lost none of his legendary power to synthesize diverse musical traditions (Indian, Balinese, jazz, classical, acoustic, electronic) in provocative and inspirational ways.Riley’s performance was made possible by his longtime admirer, MIT professor Evan Ziporyn, a composer, musician, and Gamelan Galak Tika’s founder.

Ziporyn, dressed (like the members of the orchestra) in traditional Balinese garments of a royal purple hue, complete with sash and headband, took on numerous roles: master of ceremonies, conductor, drummer, and clarinetist. Also appearing as soloist in several numbers with Ziporyn and Riley was Riley’s son Gyan, a virtuoso guitarist. The evening suffused the mellow glow of a multigenerational minimalist family reunion.

The world premiere of Terry Riley’s “White Space Conflict,’’ scored for gamelan orchestra, electric guitar, and electronic keyboard, was the highlight and climax. In a brief introductory comment, Ziporyn explained that the title emerged from a garbled e-mail exchange between Cambridge and the composer at his home in Nevada. In fact, the title’s “chance’’ quality suits the content well. 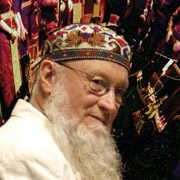 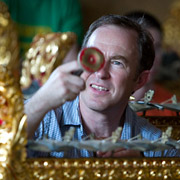 "The point is to be here now, in the moment
and at one with nature, a concept treasured
in Balinese spirituality."

Here, as in all the works on the program, the musical structure begins with a small repeated melodic or rhythmic gesture. This gesture gradually grows in volume and intensity, with various forces joining in and dropping out. Riley achieved mesmerizing effects at the electronic keyboard, from what sounded like car horns to Indian sitar, jazzy interludes and weird drumming. Around him, the metallic clatter of the gamelans, hand cymbals, and reed pipes rose and fell in shimmering waves of sonic color. The sense of progressing toward a harmonic or structural goal found in music of the modern Western tradition was absent. The point is to be here now, in the moment and at one with nature, a concept treasured in Balinese spirituality.

A similar sensibility informed the other works. These included one piece for gamelan ensemble, “Penyembrama’’; one for gamelan ensemble and dancer (the remarkably agile Shoko Yamamuro); one for solo organ (“The Bull’’) with its creator Riley at the keyboard; and several of Riley’s compositions for instrumental trio. These were performed with improvisatory élan by Ziporyn joining Riley.

Full review in The Boston Globe