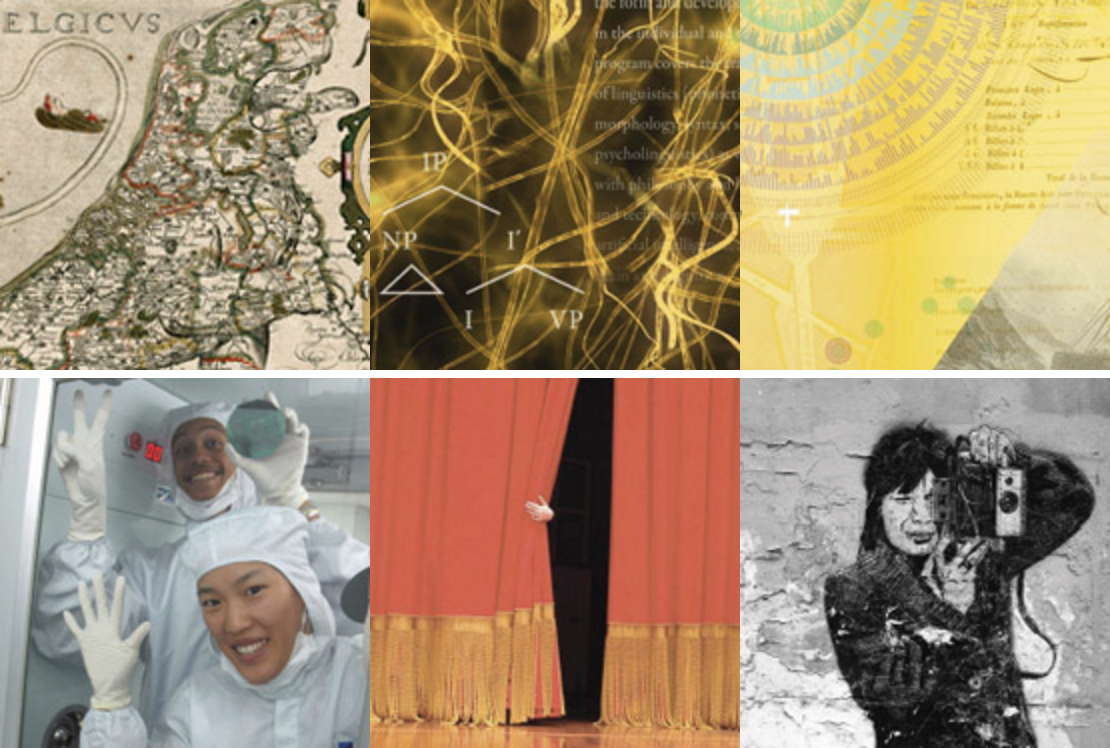 “It is literally impossible to walk past the installation without stopping. It pulls you in, and makes me want to go back to being a student again and to take a course or two in anthropology, music, literature, political science — and, of course, history."

The installation, which officially opened in October 2011, presents an overview of the School’s 23 fields of study — from Anthropology to Economics, from Literature to Political Science — as well as updating news, profiles, and research briefs. There is also an updating gallery of significant research and profiles, and an upper wall area is designed to accept curated installations related to the humanities, arts, and social sciences. The exhibit is located in Building 14,  near Killian Hall and the Hayden Library.

A few months after the opening, this reporter spent some time in the lobby talking with with faculty, students and passersby to get their impressions of the exhibit.

“It is a visual and intellectual feast," said Pauline Maier, the author of Ratification, and the William R. Kenan Jr. Professor of History. "It gives a snapshot of the work being done in the many parts of MIT-SHASS, and manages — through photos and brief quotations — to convey the excitement that characterizes scholarship in the humanities, arts, and social sciences at MIT."

“I always thought that MIT was strictly an engineering institute,” said Eloise Anne Davis of Boston, who came through the exhibit on a tour. “I had no idea that MIT also offers language courses, literature, and classes on global security.”

The exhibit is designed to appeal both to the MIT community, and to people who are visiting, and the density of information is calibrated to the environment, a space that also functions as a passageway. On one side of the lobby, the exhibit panels form the Field of Study wall, a series of kiosks, creating niches for viewing all the major MIT-SHASS disciplines. On the facing side, a Gallery Wall displays changeable prints with news, profiles, and current research. The wall also contains a literature shelf and a blackboard for comments. (Recent notes have included the Schroediger cat equation, professions of love, and the advice to "Call your Mother.") 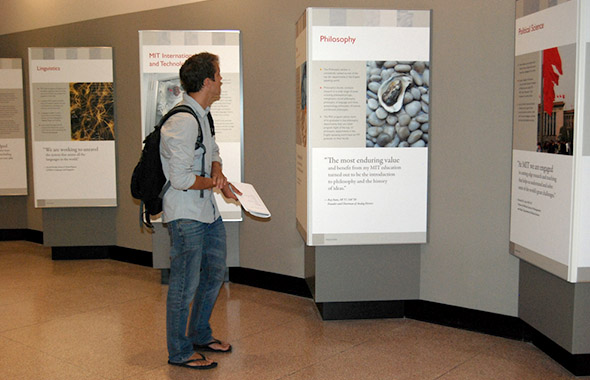 Behind the Scenes
Slide show traces the development of the exhibit from the discovery phase, through design, fabrication, and installation.
Great Ideas Exhibit - Slide Show

“It’s inviting,” remarked mathematics Professor Emeritus Alar Toomre, who paused to examine a panel detailing Maier’s recent work on the adoption of the U.S. Constitution. “The kiosk posters are quite interesting. And, after you’ve read one, there’s a pleasant surprise on the other side.”

Designed inhouse by the SHASS Communications team, and fabricated by Mystic Scenic Studios, DGI Graphics, and Makepeace, the exhibit opened in October 2011 at a festive event attended by President Susan Hockfield. Dr. Hockfield revealed that she frequently walks through the exhibit en route to and from her office, and commented on how valuable it is to share MIT’s full story with the world.

Deborah Fitzgerald, Kenan Sahin Dean of MIT SHASS said "The exhibit team has brilliantly captured the excitement, intellectual richness, and scholarly depth of SHASS faculty and students in this new exhibit.” She added, “I think it gives people a genuine sense of how SHASS people engage with the world of ideas and how they make things happen in the world."

MIT tour guide Chris Smith, ’12, a brain and cognitive sciences major, said he appreciates all the useful information that the exhibit provides about the School — even though it tends to slow down his tours. “I always plan on stopping a while longer now," he said, "because people like to read the panels and look at all the photographs.”

“It is literally impossible to walk past the installation without stopping,” historian Maier said. “It pulls you in, and makes me want to go back to being a student again and to take a course or two in anthropology, music, literature, political science — and, of course, history."

Nyan Cat visits the Great Ideas Exhibit
The popular internet meme Nyan Cat popped up in the lobby of Building 14 for the winter holiday season. Originally a student hack, the Cat is a playful addition to a space transformed over the past year into a new, permanent exhibit that showcases MIT’s School of Humanities, Arts, and Social Sciences.
Story