workshop with Haitian professors of physics and biology

"We are helping create a new lexicon and new tools for science in Kreyòl— and a new culture for deep learning in Haiti."

MIT Associate Professor of Linguistics Michel DeGraff recently received a one million-dollar grant from the National Science Foundation for his linguistics research in Haiti, which includes developing classroom tools to teach science and math in Haitian Creole (Kreyòl) for the first time. We spoke with him about his vision for the research, about the Kreyòl language, and the future of education in Haiti.

How will the NSF grant further your work?

DeGraff:  This NSF grant will allow us to take substantive, systematic steps to build on the small, initial steps that we have already taken in Haiti with the engagement of MIT's Office of Educational Innovation and Technology, alongside our partners in Haiti—Fondasyon Konesans ak Libète (FOKAL), the Faculty of Sciences of the State University of Haiti, and University Caraïbes. Thanks to this grant, the MIT-Haiti Initiative will be doing something that has never been done before.

As far as I know, this is the first-ever project to create and evaluate a substantial body of online Kreyòl materials for science, technology, engineering, and mathematics (STEM) in higher education. We are helping create a new lexicon and new tools for science in Kreyòl and a new culture for deep learning in Haiti.

This culture is radically different from the traditional approach in Haiti—that is, rote memorization of French texts that few can understand. And this project can serve as a model for the millions of science-hungry students all around the world who speak local languages like Haitian Creole. So our project is breaking new ground both in linguistics and in STEM education.

This makes me both excited and intimidated, yet so encouraged that there are many educators—at MIT, in Haiti, and elsewhere—who are committed to the success of this project. And I hope that soon this initiative will provide great learning and global leadership opportunities for our students as well.

How different is Kreyòl from French?

DeGraff: Kreyòl and French are two distinct languages, even though they are historically related. This is somewhat like comparing French and Latin. Most Haitian Creole words and many Haitian Creole sentence patterns have their origins in French, but the sound patterns, the syntax, and the meanings are often quite different. Kreyòl also shows influences from the Niger-Congo family of languages in Africa. Kreyòl-only speakers can barely understand French, and vice versa. In effect, French as the language of instruction works as a barrier against most students in Haiti.

"This project can serve as a model for the millions of science-hungry students all around the world who speak local languages like Haitian Creole. So our project is breaking new grounds both in linguistics and in STEM education."

Your project is designed for people whose languages don’t include scientific and technological terminology. Can you explain the nature and scope of the deficit?

DeGraff: It's only in the 1980s that Kreyòl began to be systematically written, with an official orthography. Unfortunately, in Haiti, most materials for higher education are in French. So there's a scarcity of Kreyòl materials and Kreyòl terms for STEM, especially at the higher levels. Such lexical gaps are a common phenomenon in the history of languages, including what are now known as "international languages."

Back in the period when European scholars wrote mostly in Latin or Greek, the "vernacular languages" (for example, French in the middle ages) were not used for scholarly writing. Therefore they lacked words for science. From that perspective, the word stocks of languages are like muscles: they develop as they are being used. Where do these new words come from? Usually there's no committee that decides. The elaboration of new words is typically a bottom-up process. English words for new communication technology are good examples of that: "to xerox," "to fax," "to email, "to skype," etc.

Kreyòl already has basic words for measurements, arithmetic, etc., and most of them are derived from French. For more complex scientific matters, our experiments with Kreyòl-based materials so far suggest that many scientific terms (in biology and physics, for example) will be derived from their French analogues, many of which, in turn, are derived from Latin or Greek. But these French-derived words, once they enter Kreyòl, adopt new sound patterns.

In some cases, it may make more sense to look for scientific terms that already resonate with familiar concepts from the local culture. This is one area where research is needed—linguistic exploration for the elaboration and evaluation of a new lexicon for science in Kreyòl. With the help of MIT's Teaching and Learning Laboratory, we will also evaluate the use of our new Kreyòl-based materials in the classroom.

workshop with Haitian professors of physics and biology

"Kreyòl and French are two distinct languages, even though they are historically related. This is  somewhat like comparing French and Latin."

How many Haitian students do you expect to expose to learning STEM subjects in Kreyòl through this project?

DeGraff: Our project began earlier this year with workshops that included some 50 full-time professors in physics and biology. The resources that we are developing, in collaboration with Haitian colleagues, will eventually be all made available online as Open Education Resources in Haitian Creole. This is on the model of open education resources developed at MIT such as STAR (Software Tools for Academics and Researchers) for biology, Mathlets for math, and subsets of OpenCourseWare. Therefore, these resources will ultimately be accessible to large groups of Creole-speaking teachers and students and other interested parties with access to the Internet. Fortunately Wi-Fi is becoming more and more available in Haiti, even in remote rural areas. We will also make resources available through disks for offline local access.

Furthermore, one central objective of the project is to increase capacity in Haiti's higher-education system. Through this initiative, faculty in Haiti are expanding and deepening their expertise in technology-enabled active-learning pedagogies, expertise that they can pass along to increasing numbers of faculty and students. Eventually these efforts will produce an expanding library of locally grown Open Education Resources in Kreyòl. Such local efforts will give the project a much better chance at sustainability than if these resources were to come from the outside alone. 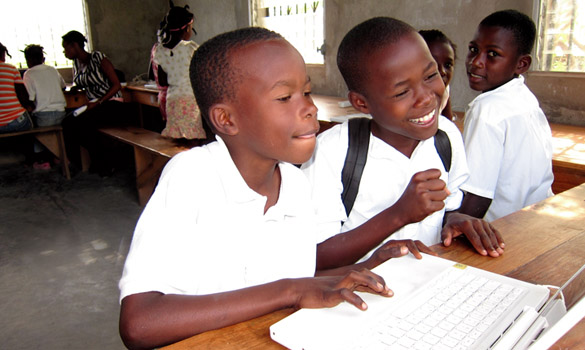 "This project could only have started at MIT, where faculty and staff have such a commitment to improving research and education on a global scale.”

Can you say something about how working at MIT facilitated this project?

DeGraff: As far as I can tell, this project could only have started at MIT where faculty and staff have such a commitment to improving research and education on a global scale. MIT faculty and staff have made important strides in using educational technology and open education resources for advancing research, teaching and learning. One such stride is the Open Education movement, which was started by Open CourseWare and is now being extended by MITx and EdX. These Open Education Resources have become models for improving education elsewhere in the world. And Haiti, my beloved home country, so needs improvement in that domain. Plus there's so much to gain from new knowledge emerging, and being shared, from a diversity of perspectives, and our Haitian partners certainly have rich experiences and insights to contribute to the Open Education movement.


Have you got collaborators that you'd like to mention?

DeGraff: I've been lucky to work with a broad range of colleagues from all across the Institute and in Haiti as well, all interested in the global implications of our respective work and of our collaboration. If I have to single out anyone, it's got to be Vijay Kumar (Senior Associate Dean and Director of MIT's Office of Educational Innovation and Technology) and his valiant team at OEIT. This work would not have seen the light of day without Vijay's partnership from the start. And, of course, there could not be any MIT-Haiti Initiative without the amazingly selfless teamwork among educators both at MIT and in Haiti or without the support of MIT's administration, especially Philip Khoury and Tom Kochan who are responsible for MIT's long-term initiatives in Haiti.

I should also insist on how important it has been to count on collaborators and supporters outside MIT. I am especially thankful for early support from the Wade Fund, from the Soros Foundation and from the Fondasyon Konesans ak Libète (FOKAL) in Haiti. And we've been learning so much from our partners in Haiti—from Professor Yves Dejean and other colleagues at the Faculté de Linguistique Appliquée of the State University of Haiti, University Caraïbes, and the Matènwa Community School (these are pioneers in Kreyòl-based instruction), and from the Faculté des Sciences of the State University of Haiti and NATCOM (one of Haiti's telecommunication companies which has given us key technological support for our workshops in Haiti). And I am eternally grateful to NSF for this extraordinary grant, and to Dr. Janet Kolodner (NSF Cyberlearning) for her support from the get-go and her deep understanding of what it takes for such a project to succeed.

Our MIT-Haiti Initiative shows the potential for collaboration among scientists, mathematicians, linguists, educators, etc., toward addressing enduring problems in global education and social justice. Many hands lighten the load.

Or, to say this in Kreyòl:

A champion of Creole

Resources for Rebuilding Haiti
Information on organizations, programs, and initiatives