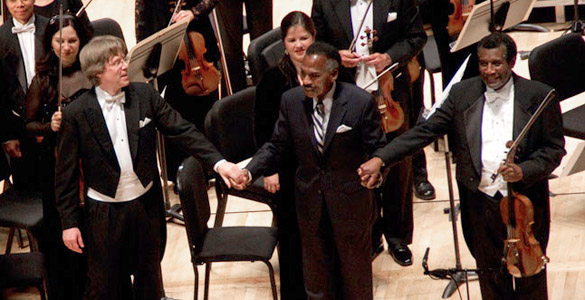 Dazzling
Violist Marcus Thompson, Robert R. Taylor Professor of Music at MIT, presented the world premiere of the Viola Concerto by composer Olly Wilson with the Rochester Philharmonic Orchestra on June 2. The performance, under the direction of Arild Remmereit at Kodak Hall at Eastman Theater, was presented as part of the 40th International Viola Congress held at Eastman School of Music in Rochester, N.Y.

Stuart Low, reviewer for The Rochester Democrat and Chronicle, wrote: “Olly Wilson’s Viola Concerto, dazzlingly performed by Boston soloist Marcus Thompson, was a more serious affair. Skillfully and innovatively written for the instrument, it often calls for hammered or vigorously scrubbed bow strokes that help the viola’s dark tone project. The concerto’s atonal lines tend to unfold in tight, chromatic steps — a great help to a violist zipping around this large instrument in quick runs. Wilson, a highly acclaimed Berkeley, Calif., composer, also takes advantage of the viola’s lyrical side in the concerto’s elegiac middle section. Searing and haunted by turns, it was eloquently delivered by Thompson.”

A Concerto dedicated to Thompson
Wilson’s Viola Concerto was commissioned by the National Endowment of the Arts and written for, and dedicated to, Marcus Thompson. Wilson is professor of music at University of California at Berkeley. He has received numerous honors and awards from the American Academy in Rome and the American Academy of Arts and Letters and Guggenheim and Rockefeller Foundation Fellowships. His works have been performed by major American orchestras and international ensembles.