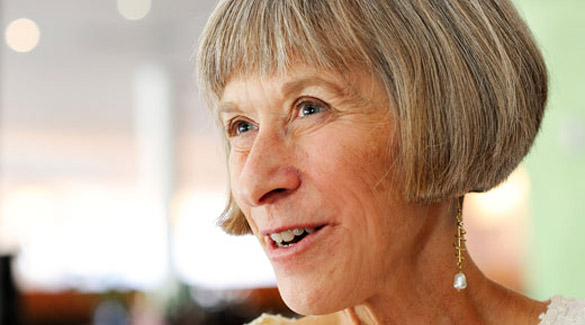 "History is both what happens, and how we think about what happens. The big questions I am asking have to do with how history—in both senses—is changing in this age of human empire.”

An historian who finds evidence and insight in literature, Rosalind Williams recently completed a book examining the critical juncture when human endeavors began to dominate the planet as never before. Published by the University of Chicago Press (2013), The Triumph of Human Empire explores this turning point in history and technology through the lives and works of three writers from the late 1800s. We caught up with Wiliams recently to talk about her book.


What do you mean by the term "human empire," and why does this subject interest you?

I’m borrowing Francis Bacon’s use of the term, from a tale with utopian overtones that he wrote in the early 1600s, imagining the discovery of a new Atlantis. He doesn’t mean empire in the sense of controlling land. He imagines it as the vast expansion of human knowledge and power. In Bacon’s view, and in the view of many since him, this is the goal of humanity.

I research how this expansion of human knowledge and power has changed human history. Think of what one person can produce—and consume—today in contrast to the world before the Industrial Revolution. It is an astounding increase. In addition, the extent and dominance of the human-built world is far beyond anything that existed several hundred years ago. Finally, we are now capable of doing things on earth that were not hitherto possible for humans—for example, beginning atomic processes, or creating new forms of life, or altering the composition of the entire atmosphere.


Jules Verne, William Morris, and Robert Louis Stevenson all lived at a time when, as you put it in your book, “every imaginable measure of material growth" showed a sharp upward turn, like the shape of a hockey stick if plotted on a graph. Yet, all the writers all disturbed by what they experience. Why?

They realize that organized humanity often uses knowledge and power for unworthy ends, and that even when intentions are good, the outcomes are unpredictable. They see that humans have reached the end of the world in space and that humans are likely to continue to intensify their dominance of the planet. We conventionally call this “progress” and celebrate its blessings, but the process also brings uncounted and deeply felt losses.

This realization troubles each of these writers in different ways. Verne wants to get beyond organized humanity. He identifies with Captain Nemo of Twenty Thousand Leagues under the Sea, who builds a submarine to find a place on the planet beyond government, offering complete liberty for the individual and the possibility of exploring the still unknown. Morris mourns for the loss of daily lived connections with the nonhuman world, “the life of the earth,” as he called it. He also mourns the loss of contact with the human past, especially as buildings and crafts are rapidly being cleared away by “progress.”

Even more dramatically and sorrowfully, Stevenson witnesses the death of a civilization in the South Seas as the Western world rolls relentlessly over Polynesian culture, language, and life. It is impossible to disconnect the larger triumph of human empire from the more particular destruction of Western colonial imperialism at that time.

In imaginative writing, each of these writers responds to the changes he saw in the last decades of the 1800s. They have ways of talking about these changes that take us beyond the familiar words and concepts of our own time, such as globalization, environment, technology. These words and concepts have become impediments to understanding what is happening in the world today. They are entirely inadequate for comprehending the lived experience of human empire.

"Words and concepts such as globalization, environment, technology are inadequate for understanding what is happening in the world today, for comprehending the lived experience of human empire."

For example, my friend and colleague Leo Marx has recently published an important article on “technology,” analyzing it as a “hazardous concept.” He points out that “technology” is such an abstract, vague term that it is often used as if it were an historical actor—as “technology” doing this that and the other “to us.”  “Globalization” is routinely used in the same way, as if it were an historical actor forcing a whole range of events “on us.”

What gets left out is us—the human beings who create and deploy and use the devices, systems and markets that so much define our world. It is dangerous to create a set of illusory forces as the drivers of contemporary history. It is also dangerous to lack words for experiences of the world and of history that are so common, vivid, and disturbing. I am thinking of experiences of loss and change which get called “nostalgia,” or, even worse, “Luddism,” or some other pejorative expression. These are worn-out expressions that are used to dismiss such experiences, as if they were unreal or inappropriate. My book is intended to get real about such experiences.

Why did you choose to explore this period through the life and works of these three writers?

Literature is an invaluable resource for understanding history, both as evidence and also as a source of insight. I was drawn to these three writers because they consciously choose to write literary romances rather than realistic or naturalistic stories. They paradoxically but convincingly claim that imaginative works of literature are a more realistic appraisal of what is going on in the world than conventional realism.

Realism gives you precise details of the material world, but can also then miss the larger, non-concrete historical forces that are driving historical change. These forces can be so large and vague in origin—human-generated but often seeming exogenous—that you have to call upon fantasy to describe them.

In this sense, literary romance can be an effective representation of contemporary history. Through imaginative literature you recognize forces at work in history even before we have words to name them. To quote Stevenson, “The fact is that art is working far ahead of language as well as of science, realizing for us, by all manner of suggestions and exaggerations, effects for which as yet we have no direct name; nay, for which we may never perhaps have a direct name, for the reason that these effects do not enter very largely into the necessities of life.”

"All these events kept being described in images of fluid flow: a spill, a flood, an ash cloud, or, most persistently, a meltdown. I began to think, “What does this language tell us about our concepts of history?”

You discuss some of these seemingly exogenous forces in the documentary film “Aftermath of a crisis,” which presents a scholarly exploration of the causes of the recent financial crisis. In what ways did your experience in that workshop inform your research?

The financial crisis of 2008 now looks like one of a network of disasters of the past few years. Many of them were environmental hybrids—natural events made worse by the way they intertwined with human systems—including the Pakistani floods of 2009, the Haitian earthquake in 2010, the Gulf of Mexico oil spill that began soon after, the eruption of Eyjafjallajokull in Iceland, the Japanese earthquake and tsunami in early 2011, and later that year tornadoes and floods in the American South, Midwest, and New England.

In a sort of collective exercise of free association, all these events kept being described in images of fluid flow: a “spill” (especially in 2010, when the Gulf spill was on everyone’s mind), a “flood,” an “ash cloud,” or, most persistently, a “meltdown.” The image of meltdown was retrospectively applied to the financial crisis too. Back of all these is the more old-fashioned term "collapse" that calls to mind the fate of the World Trade Center towers in 2001.

I began to think, “What does this language tell us about our concepts of history?” We often describe history as progress—more power, more money, and even, for those with real imagination, more social progress. Increasingly, though, this linear image of progress coexists with another view of history as spreading circles of crisis, intersecting and reinforcing each other. Nowadays these two images of the patterns of history seem to coexist. They are contradictory, but we live with a lot of contradictions.

History is both what happens, and how we think about what happens. We do things and we also reflect on what are we doing. The big questions I am asking have to do with how history, in both senses, is changing in this age of human empire.” 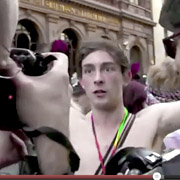 The Triumph of Human Empire
(University of Chicago Press, 2013)

The Economist names The Triumph of Human Empire,
by Roz Williams, one of best books of the year 2013

Video: Aftermath of a Crisis
a documentary by Manuel Castells and Bregtje van der Haak