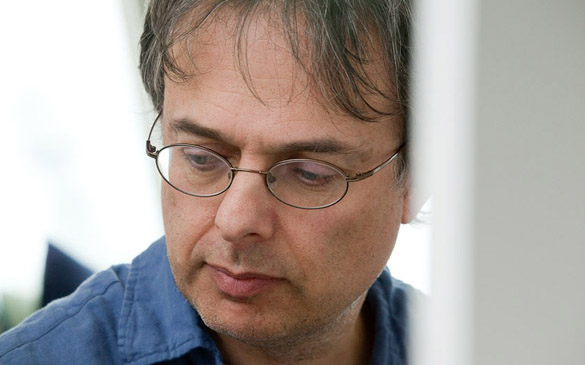 "I like hanging around ideas and seeing how
they bounce around together, and I get naturally
excited about whatever the problems are.”

Philosopher Stephen Yablo of MIT's School of Humanities, Arts, and Social Sciences, is among the 220 new members elected to the American Academy of Arts and Sciences (AAAS)—one of the nation's most prestigious honorary societies—and has also been awarded a 2012 Fellowship from the John Simon Guggenheim Memorial Foundation. His Guggenheim project is a book tentatively entitled Aboutness.

Since its founding in 1780, the AAAS has elected leading “thinkers and doers” from each generation. The current membership includes more than 250 Nobel laureates and more than 60 Pulitzer Prize winners. Yablo's Fellow AAAS inductees for 2012 include MIT Economics Professors David Autor and Amy Finkelstein, Senator Hillary Rodham Clinton, Mel Brooks, and Melinda F. Gates.

“Election to the Academy is both an honor for extraordinary accomplishment and a call to serve,” Academy President Leslie C. Berlowitz said. “We look forward to drawing on the knowledge and expertise of these distinguished men and women to advance solutions to the pressing policy challenges of the day.”

Of his work as a philosopher, Yablo notes: "Aspiring poets used to come to W.H. Auden, and he would ask them why they wanted to be poets. If they replied, 'Because I have important things to say,' he would answer, 'Forget it.' But if they told him, 'I just kind of like hanging around words and hearing how they bounce around together,' he would say, 'then there may be hope for you.'

“That’s the way I feel about philosophy," says Yablo. "I like hanging around ideas and seeing how they bounce around together, and I get naturally excited about whatever the problems are. It just sort of meshes with the way I think.”

The route to metaphysics

Describing the questions of his Guggenheim project, Yablo says, "Aboutness is the relation that meaningful items bear to whatever it is that they are on, or of, or that they address or concern. Brentano made it the defining feature of the mental; materialists have sought to ground it in natural regularities; attempts have even been made, in library science and the theory of information, to operationalize aboutness. And yet the notion plays no serious role in philosophical semantics. I will explore the prospects for putting subject matter at the heart of the theory of meaning."

Yablo earned his PhD at UC Berkeley, with a dissertation on identity and essence. He taught at Michigan for some years before moving to MIT in 1998. An NEH-funded research leave (1989) led to papers on imagination, possibility, color, and causal relations. His interests shifted during a year at the National Humanities Center. Kendall Walton had explained artistic representation as a kind of prop-based pretense (Mimesis and Make-Believe, 1990); the idea was then extended to figurative speech.

Yablo extended it further, to speech that was not overtly figurative. This led to a series of “fictionalist” papers arguing that various philosophical puzzles—about the average taxpayer, say, or the number of planets, or the alternative universe where McCain wins the election—are not “deep” but reflect an over-literal take on the language involved.

He has been attempting in recent years to put the project on a more linguistically respectable footing, with presupposition and subject-matter shifts playing the role formerly assigned to make-believe. He divides his time between straight-ahead first-order philosophy and linguistically based metaphilosophical hand-wringing. Current interests include confirmation, verisimilitude, knowledge, vagueness, and (again) truth and paradox.


Thoughts and Things
Yablo has given the Jacobsen Lecture at University College, London, the Gareth Evans Lecture at Oxford, the Hempels at Princeton, and the Kant Lectures at Stanford. Two volumes of collected papers have appeared: Thoughts (Oxford, 2008) and Things (Oxford, 2010).

American Academy of Arts and Sciences