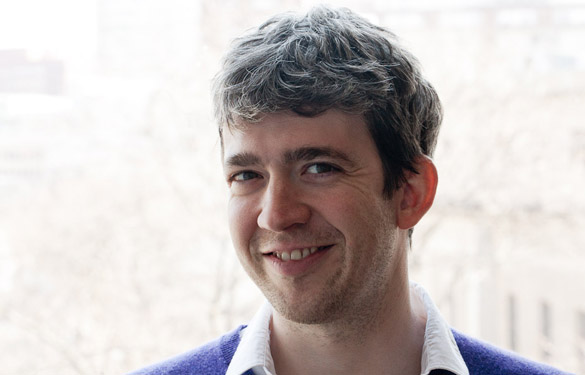 “The Internet has made it easy, normal even, to read
in all sorts of nonlinear ways, but the evidence of
medieval compilations suggests that people were already
doing that many centuries ago."

While reading online, do you sometimes find yourself skipping from politics to poetry to humor? If so, your experience is rather medieval, according to Arthur Bahr, an associate professor of literature at MIT whose first book, Fragments and Assemblages: Forming Compilations of Medieval London was just released by University of Chicago Press.

“This is why medieval literature is so interesting at our particular historical moment,” he says. “The Internet has made it easy, normal even, to read in all sorts of nonlinear ways, but the evidence of medieval compilations suggests that people were already doing that many centuries ago.

Medieval literature is also always collaborative in one way or another: readers often commented on texts by writing notes in the margin or underlining passages, and scribes frequently altered an author's words to suit the purpose of the compilation at hand. So someone like Nick Montfort [an associate professor for digital writing at MIT] is actually very medieval in his ideas of nonlinear, interactive literary production.”

While the typical modern book would never mix poetry with legal documents, or secular works with religious material, such juxtapositions are common in medieval manuscripts, which also vary widely in size and style. “The printing press was great, but it also standardized the way texts were presented,” Bahr notes.

In contrast, medieval texts were luxury items, made to order and crafted by hand. Customers would commission a variety of selections that were then bound together, resulting in books that are “more of an adventure,” Bahr says. “You don’t know what to expect as much as you do with today’s books.”

In Fragments and Assemblages, Bahr expands the ways in which we
interpret medieval manuscripts, examining the formal characteristics of
both physical manuscripts and literary works. He argues that manuscript
compilations from 14th century London reward interpretation as both
assemblages and fragments: as meaningfully constructed objects whose
forms and textual contents shed light on the city’s literary, social, and
political cultures— and as artifacts whose physical fragmentation invites
forms of literary criticism that were unintended by their medieval makers.

In Fragments and Assemblages, Bahr explores what we can learn from the peculiar way medieval manuscripts were constructed. “We’re used to the idea that a sonnet or any kind of lyric poem is an assembly of poetic lines that add up to something that’s greater than the sum of its parts,” Bahr says. “I thought something similar might be happening with how texts themselves were arranged in the manuscripts.”

Certainly, the order of medieval manuscripts cannot be entirely random, because they were so painstakingly hand-written. Yet, the assemblages often seem quite odd to the modern reader, as Bahr discovered in graduate school when he first came across a medieval French poem bound in with legal contracts. “Interspersed within same manuscript you have a little poem. What’s it doing there? How would people have interpreted this juxtaposition that seems so bizarre to us?” he wondered.

Those questions catalyzed the research for Bahr’s book, which focuses on four key compilations: the corpus of Andrew Horn, an early fourteenth century London lawyer; the Auchinleck manuscript, a collection of romance, political, and religious works from the 1330s; Geoffrey Chaucer’s Canterbury Tales of the late fourteenth century; and the Trentham manuscript of John Gower, a Chaucer contemporary.

“Arthur Bahr’s scholarship is deeply learned...
[and his] prose sparkles with intellectual delicacy,
energy, and pleasure. This is scholarship voiced in
an especially agreeable and distinctive way."

The French poem Bahr found was bound along with Horn’s legal documents, and that manuscript led him in turn to the Auchinleck text, which was written by some of the same scribes. “I picked a part of the manuscript that looks particularly weird, and I thought, if I suppose the arrangement is not just randomness, what would I find?” he says. “What I found was a set of thematic concerns startlingly similar to Horn’s.”

These center on how members of the emergent medieval middle class thought of themselves. “I argue that you can actually see a working through of [the process of self-conceptualization] in the way in which these manuscripts get constructed because, just as compilations are assemblages of multiple disparate pieces, so too London was made up of many different professions and classes who were often in tension with one another. There's an analogy between the textual and the social, in other words," Bahr says.

He also argues that the celebrated works of Chaucer and Gower are not—as is sometimes supposed—a miraculous flowering of English literature without native antecedents. In fact, he says, the late fourteenth century is crucially indebted to earlier fourteenth century texts. “Even if they were not mostly in English, they still influenced how these quintessentially English poets imagined the interpretative potentialities of their own literary production,” Bahr says.

For Chaucer, this includes giving readers an express invitation to rearrange his tales—indicating that 14th century Londoners understood the physical manuscript as something that readers could interpretively reimagine. “And that’s pretty radical and pretty cool,” Bahr says.

MIT SHASS News: Medievalists on the art of being interdisciplinary
"The intellectual version of the slow food movement.”

Cruising in the Ruins: disciplinarity in the post/medieval university
Papers from the 2012 Babel Conference 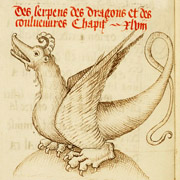