“Buyandelger explores how people interpret, resist,
and accommodate socio-economic transformations,
both by reviving traditional cultural practices and by
creating new ones.”

Associate Professor of Anthropology Manduhai Buyandelger has been awarded the James A. (1945) and Ruth Levitan Prize in the Humanities, a $25,000 research grant that will support her in-depth ethnographic study of parliamentary elections in Mongolia, with specific emphasis on the experience of female candidates.

In announcing the award, Deborah K. Fitzgerald, the Kenan Sahin Dean of MIT’s School of Humanities, Arts, and Social Sciences, remarked that there were “many excellent proposals” for this year’s Levitan, the School’s top annual prize for research. “It is a real tribute to your depth of intelligence and experience … that the committee chose [this project] as the winner,” Fitzgerald wrote in congratulating Buyandelger.


A project on Mongolian women and political power

“The Levitan Prize is going to transform my life because I’ll be able to finish this project,” Buyandelger said, noting that she plans to use the prize to complete a book highlighting the “unconventional and creative strategies” women politicians have used to meet the challenges of the post-socialist era as well as the ways in which women’s early electoral failures helped spawn a women’s movement in Mongolia.

“During socialism the state promoted top-down strategies to equalize the sexes,” she explained. “With the collapse of the state, women were left on their own … and their marginalization at the top levels of politics became even more stark.”

Although women rarely secured election during Mongolia’s early democratic years — women’s representation in the national parliament never went beyond 8 percent until 2012 — Buyandelger finds that this failure helped spur the launch of a wide range of small nongovernmental organizations (NGOs) that advocated for women’s rights.

“The individual fruits of these little NGOs in the end contributed to building a new culture and awareness about gender issues,” Buyandelger said. While the Mongolian NGOs did not always explicitly work together “in the end they collectively transformed the perception of the populace regarding women in politics,” she said. “They also leveraged the government to designate an agency to attend to gender issues.”

Buyandelger will use the Levitan Prize to complete
a book and a documentary film about the creative
strategies women politicians in Mongolia have used
to meet the challenges of the post-socialist era.

The Levitan Prize will enable Buyandelger to travel to Mongolia to finish the research for her book — One Thousand Steps to Parliament: Elections, Women’s Participation, and Gendered Transformation in Postsocialist Mongolia. It will be the second book for Buyandelger, who is the only anthropologist in the United States focused on Mongolia. Her first book, Tragic Spirits: Shamanism, Memory, and Gender in Contemporary Mongolia, was released by the University of Chicago Press in November.

“Buyandelger explores how individuals and groups interpret, resist, and accommodate these drastic socio-economic transformations, by both reviving traditional cultural practices and by creating new ones,” said Professor Susan Silbey, who heads the Anthropology Section. “In Tragic Spirits… [she documents] the revival of shamanism in the transformation from Soviet communism to liberal capitalist subjects.” 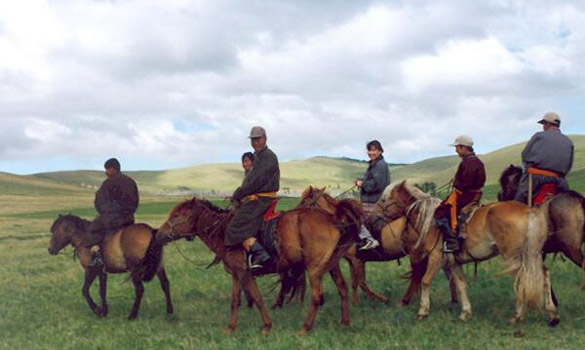 Buyandelger said she also plans to use the Levitan Prize to complete a related documentary film (titled “Intellect-ful Women”) that is centered on the experiences of Burmaa Radnaa, a politician she shadowed during the 2008 campaign. The film should provide a wholly novel perspective on the election process. “There are very few studies of women politicians in anthropology,” said Buyandelger, who was afforded rare access to top parliamentary politics while shadowing Radnaa on a daily basis.

While Radnaa lost the 2008 election, she took her case to court alleging ballot fraud — and won. And, although the court did not award her a seat, the publicity surrounding the case helped earn both her and her party a fair shot at election in 2012. As a result, Radnaa is now serving as a member of parliament in Mongolia.

“The film concentrates on Burmaa’s extraordinary analytical skills and mercurial but nuanced ways of thinking and solving problems,” Buyandelger wrote in her Levitan Prize application. “Against the commercialized elections and party politics where networks and money pave much of the road to parliamentary seats, Burmaa won a seat with limited resources but with much thinking. Her electoral strategies are embedded, primarily, in her intellect.”

About the Levitan Prize in the Humanities

The prize was established through a gift from the late James A. Levitan, a 1945 MIT graduate in chemistry, who was also a member of the MIT Corporation and of counsel at the law firm of Skadden, Arps, Slate, Meagher and Flom of New York City. The prize, first awarded in 1990, supports innovative and creative scholarship in the humanities by faculty members in the MIT School of Humanities, Arts, and Social Sciences.

Levitan Prize in the Humanities

MIT News: The surprising story of Mongolian shamanism
MIT Anthropologist Buyandelger finds that after Soviet domination,
a rebirth of shamanism helped Mongolia rewrite its own history.