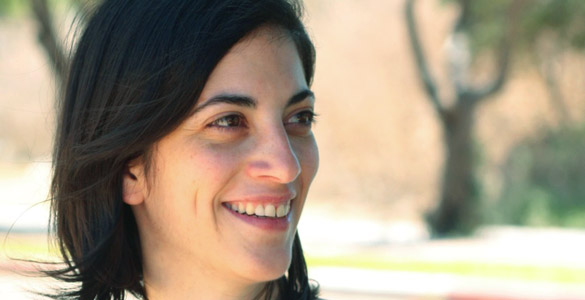 Steingart’s work demonstrates how ideas about what counted
as legitimate mathematical knowledge was deeply embedded
in political, economic, and institutional contexts shaped by
science during the Cold War. We think of math as timeless, but
just over the course of the twentieth century, what counts as math
to mathematicians has changed, sometimes quite significantly.

Alma Steingart, a doctoral candidate in MIT's Program in History, Anthropology, and Science, Technology, and Society (HASTS) has been invited to join the Harvard Society of Fellows, an elite group dedicated to “the unregimented cultivation of scholarly genius.” The post-doctoral fellowship will enable her to spend three years at Harvard studying anything she likes, without formal requirements.

Steingart, who is completing her dissertation on the history of American mathematics in the 20th century, says she was “utterly speechless for days” when she learned she had been named a Junior Fellow. “Three years at the Harvard Society of Fellows is an honor and a fantastic opportunity—not only do I get to work full-time on my first book and make headway on my second project, but I'm looking forward to learning from the other Junior and Senior Fellows.”


An opportunity for young scholars of exceptional promise

To be eligible for a Harvard Society of Fellows Junior Fellowship, a candidate must be at an early stage of his or her scholarly career. Junior Fellows are selected for their resourcefulness, initiative, and intellectual curiosity, and because their work holds exceptional promise.

David Kaiser, head of MIT’s Program in Science, Technology, and Society (STS) and Steingart’s advisor, says, “I am over the moon at this news; words fail to express how proud I am of Alma and her work.” He noted that the Harvard Society is an elite organization. “They take the best people in the world, whoever they want from any field,” he says. Candidates may not apply for fellowships; they must be nominated.

Investigating the formation of modern mathematics

Steingart joined HASTS in 2007 and has focused her dissertation on the changes American mathematics underwent in the decades following World War II. “I demonstrate how ideas about what counted as legitimate mathematical knowledge were deeply embedded in political, economic, and institutional contexts shaped by science during the Cold War,” she says.

“We think of math as timeless, but just over the course of the 20th century what counts as math to mathematicians has changed, sometimes quite significantly,” says Kaiser, who is also the Germeshausen Professor of the History of Science and a senior lecturer in physics. “[Steingart’s] work is fabulous; it’s really exciting.”

A new direction with MIT HASTS

Steingart received her undergraduate degree in mathematics from Columbia University and only later became interested in the history and sociology of science, prompting her application to HASTS, according to Kaiser. “She made a journey from pure mathematics to the humanistic study of math,” he says.

Her experience at HASTS has been invaluable, Steingart says, because the program encompasses faculty members from History, Anthropology, and STS. “I've been exposed to methodological and analytic approaches from a wide variety of fields and disciplines,” she says. “Working closely with faculty members from all three departments has pushed me to think critically and creatively. [And] it has truly been a pleasure to count myself as part of both HASTS and the broader MIT community.”

Steingart is spending the current academic year as a predoctoral research fellow at the Max Planck Institute for the History of Science in Berlin, Germany. There, in addition to working on her dissertation, she is pursuing a second project investigating how new techniques in mathematical modeling have affected the field. “She’s written brilliant papers on the rise of animations in understanding mathematics,” Kaiser says.

“I examine the efflorescence of new techniques by which mathematicians represent abstract ideas in multiple media (such as 3D physical modeling, early computer graphics, and immersive virtual environments),” Steingart says. “I call for a broader conception of what counts as mathematical activity, beyond the lone mathematician working with paper and pencil.”

Steingart will begin her fellowship at Harvard this fall.

About HASTS | Program in History, Anthropology, and  Science Technology, and Society

MIT HASTS faculty and students employ historical, ethnographic, and sociological methods and theories to investigate a wide range of topics, including: cultures of engineering, the making of scientific tools and theories, conventions of laboratory practice, science and technology in military enterprise, the relation of technology to economic institutions, the relation of science and law, the politics of race and science, knowledge-production in biomedicine and life sciences, agricultural and environmental history, and science education.