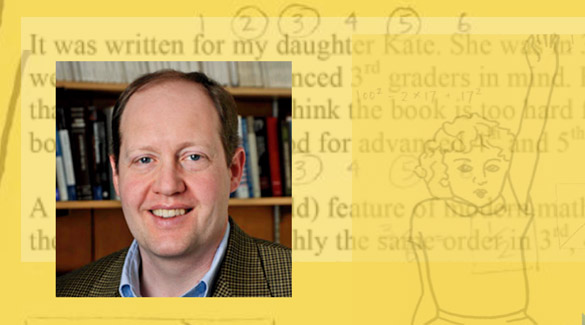 Six years ago when Glenn Ellison volunteered to coach his daughter Caroline’s middle-school math team, he hardly realized he would soon become a leading authority in the niche market of advanced mathematics textbooks for elementary- and middle-school students.

After coaching Caroline’s team for two years, Ellison, Gregory K. Palm (1970) Professor of Economics, decided to compile the notes, worksheets, and packets he had created into Hard Math for Middle School: IMLEM Edition (CreateSpace Independent Publishing Platform, 2008) to make the information more easily accessible to kids not on his team.

Although Ellison had intended the book for a small local audience — the middle-school students who participated in the Intermediate Math League of Eastern Massachusetts (IMLEM) — the book took off nationally, selling thousands of copies across the country.

The enthusiastic response to Hard Math for Middle School made apparent the absence of excellent textbooks for above-average math students. This revelation — in addition to the frequent requests from his youngest daughter, Kate — spurred Ellison to create a follow-up textbook designed for an even younger audience.

He explains that young, high-achieving students can become complacent or even apathetic in their math classes because the material isn’t difficult enough to sustain their interest. To keep such students occupied during class, teachers will often give them the next grade-level textbook; but in many cases even the next-level material is not challenging enough, and these most advanced students simply lose interest in math.

“Math is really intriguing," says Ellison, "and it’s critical for kids to learn math well while they’re still young. High school students are harder to reach than third graders, but you can make an impact on elementary school kids by showing them that math is not only interesting, but also pretty cool."

“Ellison makes it clear that the book will be
challenging — but most importantly, he presents
math as something powerful, beautiful, and fun.
I love that he encourages kids to reach high."

Challenging with a side of fun

Ellison composed Hard Math for Elementary School to be used as an enrichment textbook to supplement classroom lessons. The problems covered in the text are broad and deep in scope, and introduce topics now commonly omitted from elementary school curricula, such as prime numbers, counting, and probability.

The chapters are structured so the first few pages are relatively easy, followed by pages that gradually increase in difficulty, an approach enables kids to gain confidence.

Although Ellison alerts his readers in the introduction that some of the problems are extremely difficult to answer (even for adults), he finds that does not deter high achievers from using the book. Rather, the challenges enthrall such students, who often equate “difficult” with “fun,” and feel a great sense of accomplishment when they can solve an especially complex math problem.

Parents who use the book with their children substantiate Ellison’s theory. “I love that Glenn does not talk down to students,” said Lakshmi Iyer, who uses the book with her second-grade daughter. “He makes it clear early on that this book will be challenging — but most importantly, he presents math as something powerful, beautiful, and fun. I love that he is encouraging kids to reach high. My daughter feels a strong sense of achievement when she manages to get a problem right in his ‘hard math’ book."


A great resource for students of all ages

Others who have used Ellison’s textbook laud him for creating unparalleled supplemental math textbooks.

“I loved the way the book was written — Glenn knows very well how to make difficult material engaging and interesting,” said Dina Mayzlin SB '97, PhD '02, who used a pre-publication copy of Hard Math for Elementary School to teach her son’s Math Challenge club. “It’s an excellent resource with few (if any) alternatives. I am so grateful that Glenn has devoted the time and effort to write this book. His books will have a lot of impact on young kids.”

Ying Gao, a senior at Newton North High School, used Ellison’s book Hard Math for Middle School throughout middle school to prepare for the IMLEM and MATHCOUNTS. However, she still references the book and its more advanced topics for her current coursework. And now her nine-year-old brother Steven has begun using Ellison’s newest book. He describes the book as “fun” and especially enjoys the jokes Ellison interspersed throughout the lessons.

Inspiring the next generation

Ellison hopes his books ignite more interest in math among younger students. For now, he can appreciate the impact his books are making whenever he attends his daughter’s math competitions, where he has attained quasi-celebrity status. Here Ellison encounters numerous kids carrying his middle school math book—an occurrence he describes as "very cool."

“I do get kids who come up to me to tell me how much they like the book, or ask if I can autograph their book,” said Ellison. “What would be great is if in 10 to 12 years my MIT students come up to me and say I used your book when I was in fifth grade. That would be really awesome.”

"The Math Gap" | MIT News Office
MIT economists suggest that environment may determine how well girls do in math class. "As debate over the gender gap in school math rumbles on, Ellison and Swanson suggest a practical reason it matters: 'The phenomenon may be related to the underrepresentation of women in scientific fields,” they write in their recent working paper, 'The Gender Gap in Secondary School Mathematics at High Achievement Levels.' If highly capable girls are not encouraged to pursue math in school, they may never pursue scientific careers — thus limiting the talent pool of researchers."