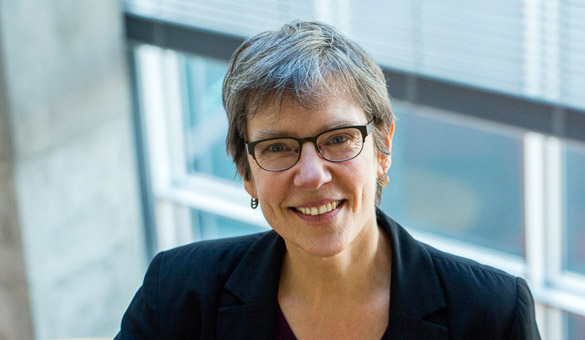 Deborah Fitzgerald, Kenan Sahin Dean of the School of Humanities, Arts, and Social Sciences, has awarded Professor of Philosophy Sally Haslanger a Ford Chair. “This honor is in recognition of Sally's significant and distinctive research, and her distinguished leadership within the field of philosophy," said Fitzgerald.

Haslanger joined the MIT faculty in 1998 and has published work on a range of topics, including metaphysics, epistemology, and feminist theory. Her most recent book, Resisting Reality: Social Construction and Social Critique (Oxford University Press, 2012), is a collection of essays on gender and race.

In an interview discussing some of the questions the book explores, Haslanger observes that "The supposed line between the 'natural' and the 'social' is of crucial importance for theories of justice: the 'natural' is not as fixed as we might think, and the 'social' can be much more fixed than we imagined. Some differences between us must be respected, but others should be overcome—but which are which?"

The former director of MIT’s Women and Gender Studies Program, Haslanger is currently serving as president of the Eastern Division of the American Philosophical Association (APA). She also co-edits the Symposia on Gender, Race and Philosophy and convenes the Workshop on Gender and Philosophy and the Women in Philosophy Task Force.

In 2011, Haslanger became the first scholar working primarily in feminist philosophy and critical race theory to be invited to deliver the APA’s Carus lectures. That same year, she received a Tribute to Outstanding Women Award from the YWCA in Cambridge, MA, for work that helps to empower women and eliminate racism. In 2010, she was named Distinguished Woman Philosopher of the Year by the Society for Women in Philosophy. Haslanger is also a former recipient of the School’s James A. and Ruth Levitan Award for Excellence in Teaching. Archive: Interview with Sally Haslanger
What is natural, and what is social?