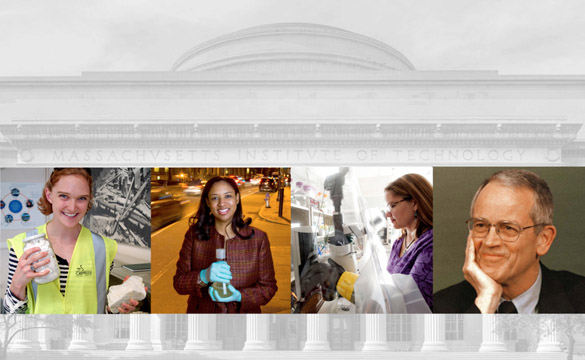 “The edit-a-thon was a great demonstration of how
MIT students engage with the historical, political,
social and ethical dimensions of science and technology."

The contributions of women to the science, technology, engineering, and mathematics (STEM) fields gained some additional visibility on Wikipedia this spring as MIT students and faculty members teamed up for a"Women-in-STEM Edit-a-thon-at-MIT" in honor of former MIT President Charles M. Vest, who died in 2013.

“It seemed like the perfect exercise to enact the spirit of Vest's legacy in regards to his support of female faculty at MIT,” said Visiting Lecturer Megan Fernandes, a member of the organizing committee for the March 18, 2014, event sponsored by the Women's and Gender Studies Program (WGS), a program of the MIT School of Humanities, Arts and Social Sciences.

During his presidency, Vest launched the 1999 landmark "Study on the Status of Women Faculty in Science at MIT" and thereafter championed efforts to rectify the gender inequities the report uncovered. In a December 2013 reflection on his efforts, MIT News wrote, "Vest’s deft handling of one of his presidency’s greatest challenges — a public examination of MIT’s troubled history on issues relating to gender equity — ultimately proved a high point of his tenure, reinforcing the Institute’s status as a beacon of meritocracy.

In 1998, Vest forthrightly acknowledged serious gender-equity problems cited by senior women faculty in the School of Science; he then supported corrective measures to address longstanding imbalances. A stunningly candid and publicly released report detailing gender inequity at MIT — and Vest’s subsequent leadership on the issue — stimulated examination of gender equality at universities across the country.

A vision of full empowerment

Margo Dawes, a senior in urban studies and planning, who attended the edit-a-thon, said, “Seeing so many students and faculty collaborating for an evening to ensure the recognition of women's achievements in science reassured me that Chuck Vest's vision is still being realized at MIT.”

MIT Institute Community and Equity Officer Edmund Bertschinger, who also attended the event, praised WGS for its work keeping equity issues in the spotlight on campus. “MIT has a long history of self-examination and self-improvement. While great strides have been made in promoting gender equity, we need to continue promoting not just equal opportunity, but full empowerment of all of our students, postdocs, staff, and faculty,” he said. “The Program in Women's and Gender Studies plays a key role in leading conversations and actions that empower our community. The Wikipedia Edit-a-thon was a great example.”

Improving Wikipedia entries was deemed a fitting tribute to Vest because women’s perspectives are underrepresented in the online encyclopedia, according to Fernandes. “Eighty to 90 percent of wiki editors are male, and this creates a structural hierarchy of knowledge that is incomplete. We want our students to think about knowledge production as politically informed,” said Fernandes, who incorporated the edit-a-thon into her spring "Gender and Technology" class, a popular WGS subject.

The event began with a crash course on editing Wikipedia entries led by science journalist and longtime Wikipedia editor Maia Weinstock, who is now deputy editor at the MIT News Office. The three-hour session drew about 25 attendees and resulted in two new Wikipedia entries—on British biologist Penelope Jeggo and on MIT chemical engineer Karen Gleason, who is also the Associate Provost for MIT. The group also expanded or otherwise improved 13 additional entries.

The cultural, political, historical dimensions of science and technology

“It was a really exciting thing to have students writing history,” said WGS Director Emma Teng, who also created a website honoring Vest’s efforts to promote gender equity among the faculty at MIT. "It is so important for students to see themselves not only as users of Wikipedia, but also as producers of knowledge who can help to improve Wikipedia — and right its gender imbalances — through their own hands-on efforts. The edit-a-thon was a great demonstration of how MIT students engage with the historical, political, social and ethical dimensions of science and technology, which are vibrant areas of scholarship in SHASS."

Study on the Status of Women Faculty in Science at MIT, March 1999