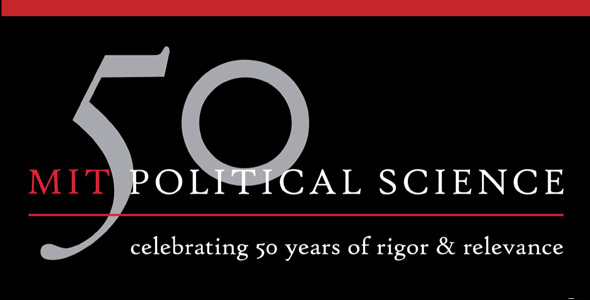 “At MIT, we aim to produce not just scientists and engineers, but citizens — educated human beings who appreciate the complexities of the world around them and are committed to making a difference. That is MIT — and achieving that vision depends on MIT Political Science.”

Founded in the midst of the Vietnam War with the vision to use political science to make a difference in the lives of people, MIT’s Department of Political Science remains true to that vision today, according to alumni, faculty, and other speakers featured at the department’s 50th anniversary symposium on November 6.

Titled “50 Years of Rigor and Relevance,” the symposium drew more than 200 people to MIT’s Wong Auditorium for a daylong series of panel discussions that explored the department’s distinctive strengths and its influence on the nation and the world.

Those strengths, as highlighted by speaker after speaker, include: asking big questions, collaborating across disciplines, conducting field research, and applying analytical rigor to draw connections between political theory and policies that have real-world impact.

“We really don’t compromise on either relevance or rigor,” said Associate Professor Lily Tsai, founder of the MIT Governance Lab. “We are pretty good at getting policymakers to care about what research says.”

The political science faculty is vital to the Institute’s educational mission, as MIT President L. Rafael Reif said in a message to salute the anniversary. “At MIT, we aim to produce not just scientists and engineers, but citizens — educated human beings who appreciate the complexities of the world around them and are committed to making a difference. That is MIT — and achieving that vision depends on MIT Political Science,” he said.

“The MIT Political Science Department is truly a singular institution. There’s such strong DNA for asking big questions, the importance of theory, the importance of relevance. People are doing work here they can’t do anywhere else.”

The event began with greetings from Professor Andrea Campbell, head of the department, followed by a welcome from Melissa Nobles, former department head and current Kenan Sahin Dean of the School of Humanities, Arts, and Social Sciences.

Steven Rathgeb Smith PhD ’88, executive director of the American Political Science Association, then offered opening remarks in which he noted that political science at MIT [initially launched as a discipline within Course 14 in 1955] was formed into its own department (Course 17) during the Cold War, “a time when people engaged in public affairs understood big stakes existed and participating was a noble cause.” Today, he said the department’s founding vision remains critical to the field at large. “Political science can offer insights that improve people’s lives.”

By way of proof, the first panel focused on the contributions of MIT Political Science to national security, health care and social policy, American elections, and US industrial policy.

Barry R. Posen, the Ford International Professor of Political Science, led off with an overview of current MIT work in security studies, including research into the pitfalls of trying to coerce weak states as well as the risks inherent in destroying authoritarian regimes. “Political science can analyze what happened, and because of the freedom we have as scholars, we can call a screwup a screwup,” he said. “We are trained to find the general in the specific and explain why trying the same course of action again will not work.”

Next, Campbell, who is also the Arthur and Ruth Sloan Professor of Political Science, discussed her role in groundbreaking work on health-care policy, which was cited in the Supreme Court’s decision upholding the Affordable Care Act. Charles Stewart III, Kenan Sahin Distinguished Professor of Political Science, followed by outlining MIT’s work on the Caltech/MIT Voting Technology Project, which was launched to prevent a repeat of the 2000 election’s vote-count fiasco.

“We were brought together and told the job was to build the perfect voting machine, and we discovered very quickly that this was a dumb idea,” Stewart said. “We were approaching this problem like a bunch of engineers, but we quickly concluded the problem was a system problem.” The project has contributed to changes in both laws and technology that have significantly improved the election system, restoring the vote to millions of Americans who had effectively been disenfranchised by faulty ballot designs, voting machines, and voter registration procedures, Stewart said.

Suzanne Berger, the Raphael Dorman-Helen Starbuck Professor of Political Science, rounded out the first panel by providing a snapshot of MIT’s Production in the Innovation Economy (PIE) project, which she co-chaired. Sparked into being by the US financial crisis of 2007–2008, PIE was a multidisciplinary effort to determine the future of American manufacturing.

PIE found a strong rationale for strengthening manufacturing and recommended policies to create the resources needed and rebuild manufacturing. “Shaping context in many ways shapes outcomes,” Berger said, noting that she met with President Obama and testified to Congress about this research. “I do believe our findings played a significant role in [subsequent policy decisions].” 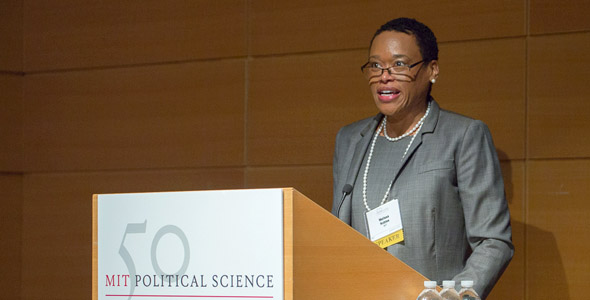 Questions of war and peace

The second panel of the day centered on the contributions of the department to understanding global conflict. “Questions of war and peace are inherently important to the fate of people,” Posen said in introducing the panel. “Our privilege as scholars of [political science] is that we ought to strive to be of some use.”

First to speak was Roger Petersen, the Arthur and Ruth Sloan Professor of Political Science, who credited MIT — particularly its ethos of tackling big questions — for inspiring his groundbreaking research into the roots of ethnic violence in Eastern Europe. “We take the first step of the scientific method very seriously, and that is observation,” he said. Having noticed that multinational areas had disintegrated, and that major ethnic groups had risen up to become nation states, Petersen asked why. The answer, he found, centered on the powerful influence of fear, hatred, and resentment.

Associate Professor Vipin Narang next detailed MIT’s work on nuclear strategy from the Cold War through today. “We are at the vanguard now of studying the second nuclear age…[which] is in some ways more dangerous,” he said, noting that weak states and non-state actors have raised the risk of nuclear confrontation. 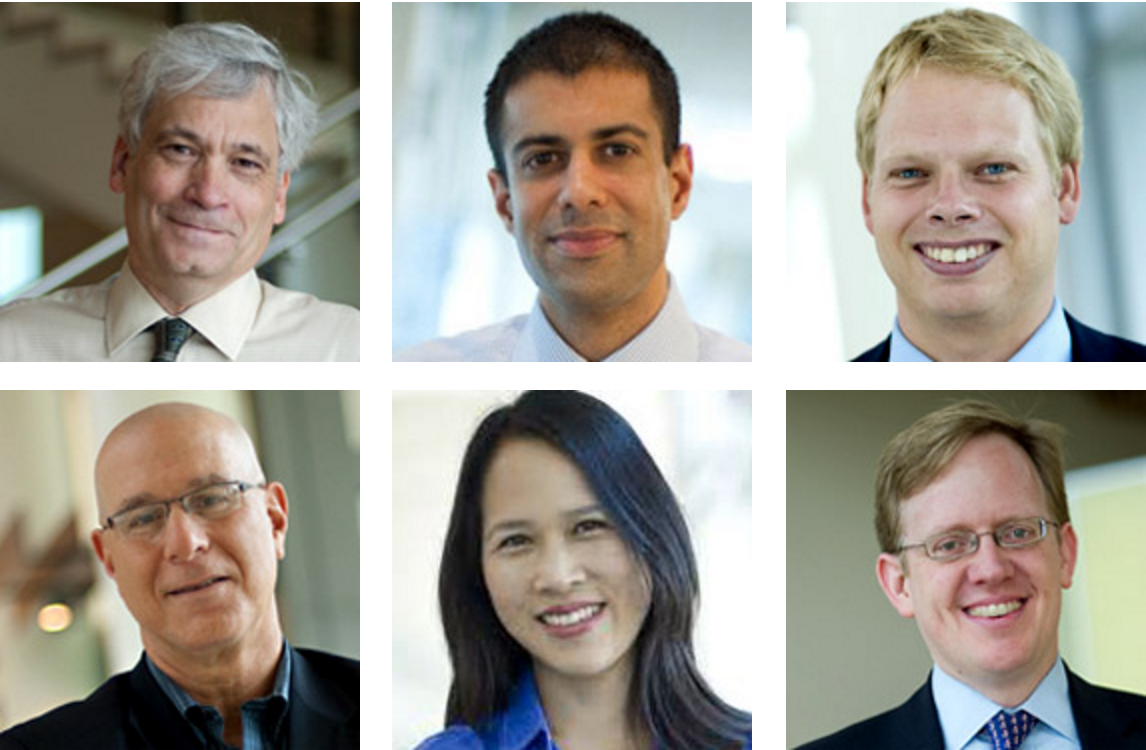 Assistant Professor Richard Nielsen proceeded to describe his work trying to answer a big related question: “Why do some clerics turn to teaching violent jihad when most of them don’t?” Nielsen has spent years crunching Internet data to discover which clerics become jihadists and why. “When I think of what MIT is trying to contribute, I would say basic facts that are really, really hard to come by,” he said.

Answering big, fundamental questions is also central to the work of Associate Professor M. Taylor Fravel, who described his research into why, when, and how China adopts the foreign policies that it does—particularly its nuclear strategy. “MIT is a terrific place for a scholar like myself who is problem-driven,” he said. As Narang noted, “We bring scholarly rigor to the policy world.”

Combining theory with practice in the world

The two midday panels centered on MIT’s distinctive approaches to political science and on what’s unique about conducting research at the Institute. Speakers ranged from Archon Fung PhD ’99, acting dean at Harvard’s Kennedy School of Government, to Associate Professor Chappell Lawson, head of MIT International Science and Technology Initiatives and former executive director of planning and policy for US Customs and Border Control.

A common theme was the extent to which MIT Political Science marries theory to practice, ultimately working to make a difference in the world. “People think there’s some kind of tradeoff between rigor and relevance and a good political scientist should choose rigor,” said Benjamin Valentino PhD ’00, associate professor of government at Dartmouth, who served on one of these panels. “That’s not how we think about it at MIT. We reject the idea that these things are at loggerheads. We believe you can have both.”

Speakers also stressed the department’s interdisciplinary bent. “What I think is so distinctive about MIT is that … people are working across methods and approaches, often blending them together,” said ichard Locke PhD ’89, former head of MIT Political Science, and now the Provost of Brown University.

Steve Wilkinson PhD ’98, chair of Yale’s Department of Political Science, joined others in noting that MIT stands out for making fieldwork a real priority. “It’s very important to go out and interview people and open yourself up to things you don’t expect. That’s where real innovation comes from,” he said. 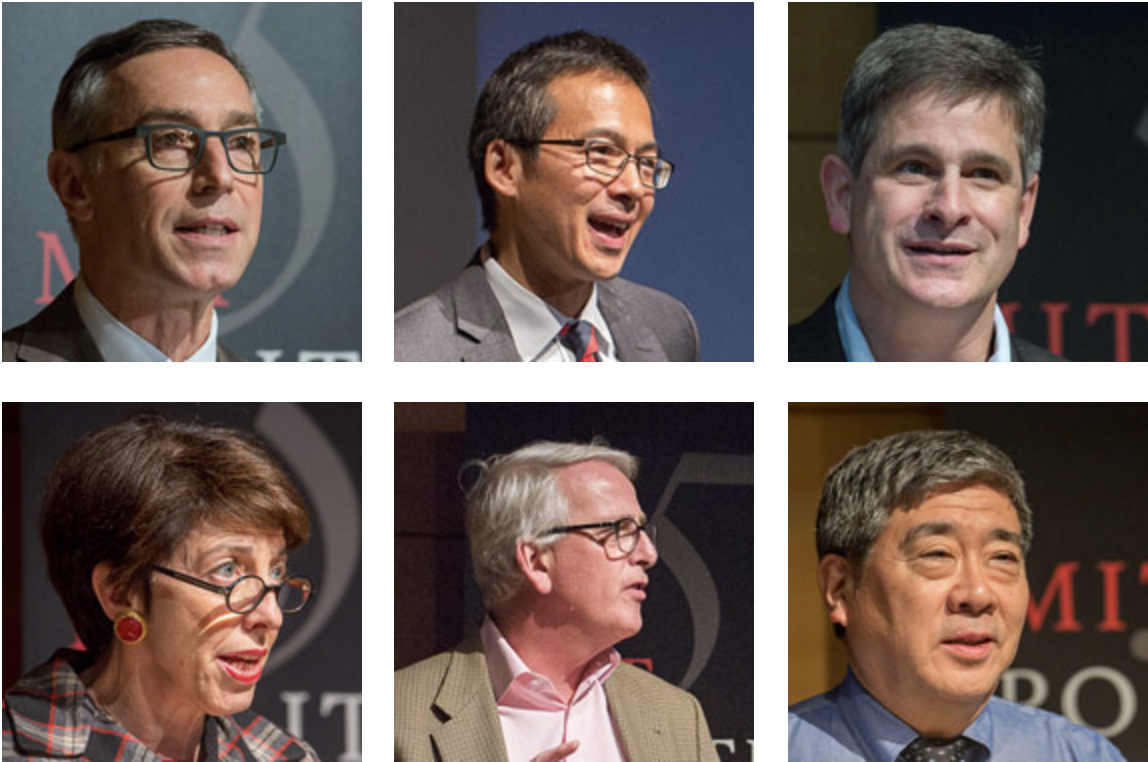 Fittingly, the symposium concluded with a panel focused on some of the major contributions made by MIT Political Science to the real world of policy practice. This panel featured Ivo Daalder PhD ’90, the former US ambassador to NATO; Susan Shirk PhD ’74, former deputy assistant secretary of state at the Bureau of East Asia and Pacific Affairs; William Durch PhD ’88 who served as project director for the UN Secretary-General’s Panel on UN Peace Operations; and Kathleen Hicks PhD ‘10, the former principal deputy under secretary of defense for policy.

“It’s a true privilege to serve one’s country and if you get lucky enough to get that chance, grab it, and the good news if you’ve been here at MIT you can probably do it in a way that’s successful,” said Daalder, who credited MIT with providing three keys to his success: expertise, analytical rigor, and a theoretical framework for how the world works.

Hicks, who came to the Institute on a temporary assignment from the Department of Defense, said she particularly appreciated the MIT Political Science Department’s respect for practitioners and its appreciation for history. Her experience at MIT gave her a strong understanding of analytical frameworks, analytic rigor, and subject matter breadth, she said.

“The reality for policymakers is that you are pulling from many disciplines, and MIT does a good job of forcing you out of your comfort zone and into complimentary fields that can help you out,” Hicks said.

Clearly, 50 years since its founding, MIT Political Science is going strong. At the end of the day, Campbell summed up the symposium’s key points this way: “The MIT Political Science Department is truly a singular institution. There’s such strong DNA for asking big questions, the importance of theory, the importance of relevance. People are doing work here they can’t do anywhere else.” 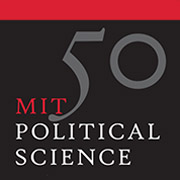